The World Cup has begun. The players are ready, are you?

We have a few games of interest:

Crazy. Croatia is up by 2 with seconds left in overtime. I should get this post up asap. 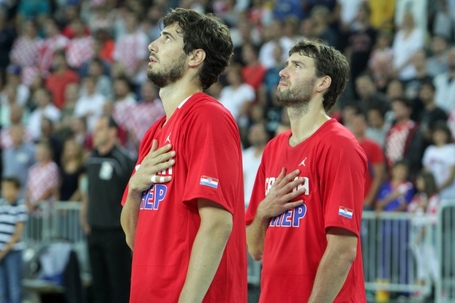 Close game ends with a last second missed shot by Philippines who were leading at critical points of the fourth quarter. Ante Tomic played 25:19 and finished with 8 points (3/4 FG, 2/2 FT), 11 rebounds, 4 assists, and 1 steal. Honestly, this game shouldn't have been close with Ante Tomic, Bogdan Bogdanovic, Dario Saric, and others going up against Andray Blatche and a bunch of guys you had never heard about before. Blatche beasted inside and out and finished with 28 points (10/24 FG, 3/4 3PT, 5/7 FT), 12 rebounds, and 1 steal. He also had 7 turn overs. But he was precisely the right tool to expose Croatia's defensive troubles. In the big picture this almost loss could be the thing that gets Croatia to take this seriously.