How Bright Is The Future For The Utah Jazz?: The Downbeat #1448

Share All sharing options for: How Bright Is The Future For The Utah Jazz?: The Downbeat #1448

I think it's fair to say that Jazz fans, as a whole, are more optimistic about the team's future than they have been in several years. A fresh start, complete with a new coach, burgeoning general manager and exciting new draft picks, will do that. But we also have to face the real possibility that things may not get significantly better for a season or two yet.

Case in point: ESPN's yearly Future Power Rankings (which take into account a team's players, management, market size, draft assets and financial situation for the next three years) are pretty bearish on the Jazz. The metric, compiled by a panel of ESPN Insider personnel, dropped the Jazz from 14th in the NBA to 21st.

An excerpt from the Jazz section:

A couple things seem to be pressing for Utah. They had to overpay Gordon Hayward this summer, essentially stripping them of much of their cap room and cap flexibility.

The Hornets offered Hayward a crazy four-year, $62 million deal the Jazz had to match. Hayward's deal, combined with Derrick Favors' extension, means the Jazz are going to have make some tough decisions on Enes Kanter and Alec Burks. While they theoretically have cap space in the summer of 2015 and 2016, they won't have much wiggle room if they sign either or both players to a significant contract.

Second, while the Jazz's roster is intriguing, they've yet to add that go-to player who could be a star. Their roster feels like a collection of good second or third starters on a playoff team. That's why they are ranked No. 20 in roster despite so many young, promising players.

I do feel they're over-weighing the "cap space" dilemma in the second paragraph there. As we saw with Gordon Hayward this offseason, for a market like Utah's, it becomes necessary to overpay to keep talent lest they wander off in free agency -- and it's MUCH harder to find equivalent talent to replace them on the open market, making cap space much less valuable in Utah than it might be in, say, Los Angeles.

Thus far, my take on the impending Kanter and Burks contracts has been that, if they are re-signed, it will mean that they have earned it (possibly by matching a contract signed elsewhere, as with Hayward). That means they will become valuable assets in trades if they really don't fit the Jazz's plans going forward. Better that than to see them leave and get the Jazz nothing but "cap space" in return -- which, again, is not as valuable in Utah as it might be elsewhere (though useful for trades in a different way).

Anyway. I don't want to get too far in over my head on player-acquisition stuff. (I can already hear Peter J. Novak's voice in my brain, poking holes in my reasoning.) The ESPN ranking goes on to say that, "if the rankings window was five years instead of three, [the Jazz's] future would be much brighter."

What do you think? Will we be waiting more than three years for the Jazz to return to a competitive level? Is everything awesome? I'd like to hear your thoughts.

One reason for both optimism and concern so far this summer has been Dante Exum's play during summer league and the FIBA World Cup. While it's a very small sample size on which to judge, in a non-NBA setting, lead NBA writer at Bleacher Report Jonathan Wasserman finds support for feelings across the positive and negative spectrum. (Don't leave; this B/R article is actually solid.)

Wasserman's observations center around the fact that Exum plays better as a primary facilitator -- not an off-ball creator. He quotes a couple of scout evaluations that back that idea up. Consequently, his conclusion is that Exum won't be an overnight success:

Overall, we're still probably looking at a multiyear timetable with regard to Exum's ability to impact an NBA game. Shooting, finishing, picking and choosing his spots-these are weaknesses likely to hold him back while playing out of position in Utah next season.

Don't be putting your money on Exum as a sleeper Rookie of the Year candidate, because it's not happening.

Instead, invest in his long-term future, because the flashes were bright enough to verify the upside.

As long as you can be patient during what should be a lengthy and bumpy period of development, I'd remain confident in Exum's chances to eventually justify his No. 5-overall value.

This comes back to the inevitable and irritatingly ubiquitous question asked ad nauseum during Summer League: Can Trey Burke and Dante Exum play well in the same backcourt?

There's no answer yet, of course. It's still way too soon to tell. And of course, the Jazz players, coaches and staff have all answered it over and over: yes, they can and will play together.

The question Wasserman seems to pose is, will that help or hinder Exum's development? He implies the holes in Exum's game will be magnified -- and could stunt his growth -- if Exum doesn't get pure point-guard minutes.

On the other hand, how much will Burke and Exum really be on the court together next year? Personally, I fully expect the Burke-Burks-Hayward-Favors-Kanter lineup to be the starting five on Opening Night, and I expect Exum to get the most burn as the backup PG. Sure, there will be some overlap -- neither Burke nor Burks can play the whole 48 minutes -- but there's also Rodney Hood to factor in, as well as Gordon Hayward's ability to shift to the 2-guard spot.

It's definitely way too soon to make any sweeping pronouncements about what Dante Exum can or cannot do. I can't wait to see more of him in Salt Lake City. But it's probably not a bad idea to temper our expectations a little. Let's just enjoy the ride.

This, from 15,806 assists, is the only FanPost I'm highlighting this week. You will have to click through to find out why.

(Nobody try this again, by the way. One time only.)

Back to the future-Jazz-predicting stuff. Basketball Insiders has published its season preview for the Jazz, with a ton of different observations and perspectives on a variety of topics. But none of their panel predicts the Jazz to finish any higher than 4th in the Northwest Division, and their best-case scenario still slots Utah at just 31 wins.

The Jazz defense improves significantly as Gobert gets more minutes and Favors and Kanter learn the ropes. The latter two develop serviceable jump shots, allowing them both to play with Gobert, while Trevor Booker becomes the fourth member of a solid frontcourt rotation. Burke improves his ability to get to the rim, Burks and Hayward improve their shooting, and the Jazz offense improves slightly as a result.

Burke's inability to finish and poor summer league portend little improvement. Synder, who would likely prefer a shooter at the four, proves unable to create an improved offense from limited-range bigs. Gobert proves so bad offensively the he falls out of the rotation, while Exum either a) is unplayable at backup point guard or b) is unplayable at backup point guard and gets development minutes anyway. Hayward and Burks show that they have essentially reached their ceilings. By March and April, the Jazz are playing only for lottery positioning.

Man, if all the things in their "best case" actually happen...this is more than a 31-win team, even in a competitive West. Remember, the Jazz started 1-14 last year with John Lucas III, Jamaal Tinsley and Diante Garrett at point guard. There's absolutely no way this year's team starts that badly.

I don't want to rehash the win-total thing again, anyway. Click through and read the whole preview, and tell us what stands out to you.

Grantland's Zach Lowe has taken it upon himself to rank every home court design in the NBA. He does not rank the EnergySolutions Arena hardwood highly -- 25th in the league, to be precise.

Having all three colors coalescing under the basket is busy, even if none of them clash. The Jazz might be better off revisiting the early 1990s, when they used navy blue for the paint and baselines and demoted the green to its natural role as part of the center-court logo and sideline trim.

Utah can fall no lower than this as long as it keeps that musical note "J" in a prominent spot. That thing is perfect. 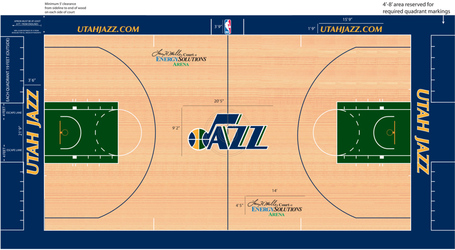