Rudy Gobert is no longer an unknown. After his breakout performance against Spain in the FIBA World Cup, everyone's clamoring for Rudy.

Share All sharing options for: Rudy Gobert Or Go Home - The Downbeat #1449

The French FIBA Revolution is being televised and Rudy Gobert has been thrust into spotlight as a result.  The heavily-favored Spaniards were tossed in large part to Gobert's fourth-quarter performance.  Here's just a few of the highlights,

His biggest impact was on defense and on the glass.  He outrebounded the Gasol brothers combined, 13-12. One of the biggest boards came with just under seven minutes to play and France clinging to a 48-45 lead.  Gobert won the rebound after a missed three which lead to a Boris Diaw three on the ensuing possession.  That sucked the life out of the home team's fans.  It may have been at this point that Spain started to panic.

On the next defensive possession, he defended Marc Gasol, keeping him out of the paint, and forcing a contested jumper at the free throw line.  Gobert still recovered to knock Gasol's missed shot off the rim and out of bounds. MOst impressive to me is his pick and roll defense and his ability to quickly recover.

He ended up playing the entire fourth quarter against either the Gasol brothers or with Serge Ibaka. He and the rest of the French team held Spain to just 9 points.

That huge block above came late, with France nursing a six-point lead. Gasol is not the Gasol of old but he's had a great tournament run. That block from Gobert was no small feat.

An even bigger play came with France up just 3, 51-48. Spain isolated Pau Gasol on the wing to go one-on-one with Gobert.  Gasol drove left into the lane and Rudy stripped the ball for the turnover.  Fantastic and clutch defense.

Finally, although Pau made this shot, look at the arc that he has to put on it just to get it over Gobert's outstretched arms. That's exactly what Boozer had to do against Gasol in the playoffs: 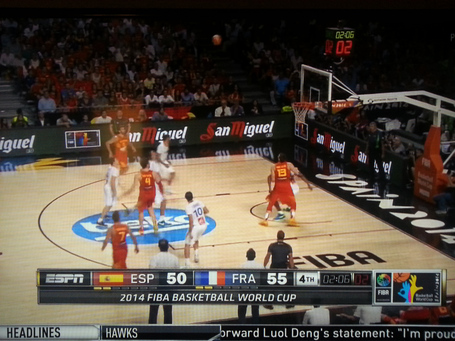 They won't be able to keep Rudy from the court this season.  We're granting him sainthood today without having played more than 450 minutes in the NBA but his impact is undeniable and will be one of the most-watched story lines of this season.

Let's listen to what Rudy had to say after the win over Spain,

What did he say? Who cares? Rudy! Listen to that accent.

Actually, here's a Google Translate version of the page. The part that that stood out to me was the last question in regards to being like Serge Ibaka,

I think, somehow, I can be Serge Ibaka of France, at least at cons. It must at least be that to which I have to tender. I have to learn from him defensively, I already do today. I want to copy the way he fights and protects the basket, with the mentality of leaving no mark. I can help a lot, even if it is not necessarily in the same way. In the NBA, he shoots a lot more here and do not miss a lot."

I think we can all agree that we would be ecstatic if Gobert was on the same level as Ibaka.  He's a long way from Ibaka offensively but as we've seen in summer league and in the FIBA World Cup, he's a monster on the defensive end. At worst, isn't he a more athletic Mark Eaton?

Yesterday, The Shums talked about Zach Lowe's court design rankings.  I've always wished that the Jazz would ditch the blue and go back to the Mardis Gras purple. To me the blue is just a remnant from the mid-2000's blue, generic, jerseys. I understand the need to give things a bit of a Utah flare, but we're not fooling anyone.  I will defend having the Jazz name in Utah to the death but we all know we're only still the Jazz because the team couldn't afford to change it when they moved from New Orleans.

Let's go all-in. I've modified the court a bit and returned it to its original color scheme of the early Delta Center while keeping the new font along the baselines, the note at center court, and the LHM marking.  I understand that there's an sponsorship requirement with ESA, but I've removed it for this exercise (click to embiggen). 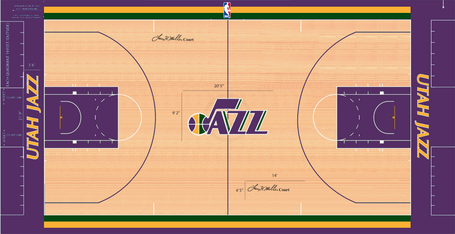 Too nostalgic? Does this bump up the court's ranking in Zach's eyes? Drop it to the bottom?

This year marks the 40th anniversary of the Utah Jazz franchise.  Their first game was an 89-74 loss to the New York Knicks on October 17th, 1974.  The Jazz will be playing a pre-season game against the Clippers this year.

I was hoping for some commemoration in the form of a patch on the uniform or something but the Jazz stated via twitter that they were unaware of any plans.  Maybe a patch something like this? 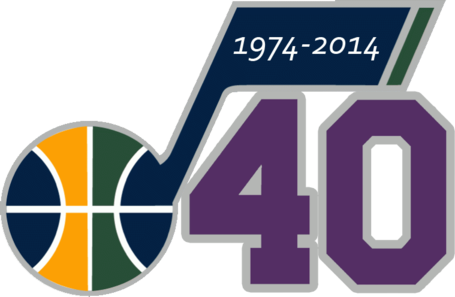 Open poll...  Who's our starting five for the season opener?