Last week Diana wrote about a couple of [former] Jazzmen that love Utah. Add another Jazzman to the list: Derrick Favors. Tony Jones of the Salt Lake Tribune wrote a very good profile of Favors.

"I’m just not a huge party guy," Favors says. "I never have been. I have my house. I have my girl. I love playing for the Jazz, and I love Utah."

Most players these days are coached by some sort of PR person to say exactly what fans want to hear, but Fav has always come across as very genuine. He stays in SLC most of the summer and can be seen all throughout the SLC metro area during the offseason.

Coach Q had this to say about Favors:

"Coaching Derrick is about trust," Snyder said. "Derrick will be best when he is a part of something bigger than himself. That’s what he embraced — taking the challenge of being an anchor for this team."

That Favors is taking this role seriously can be seen through his support of his teammates this summer. Favors even made the trip down to Vegas to support the Summer League team.

Congratulations to Rudy and his France team on their Bronze Medal at the FIBA World Cup.

As previously documented, Rudy played an integral role in his team's success and made a name for himself on the international stage.

Yesterday the US team trounced Serbia 129-92 to win the Gold Medal. The US team maybe didn't look as convincing early on, but they only got better as the tournament progressed. Not much to glean from this. US basketball dominates; the world continues its orbit around the sun. 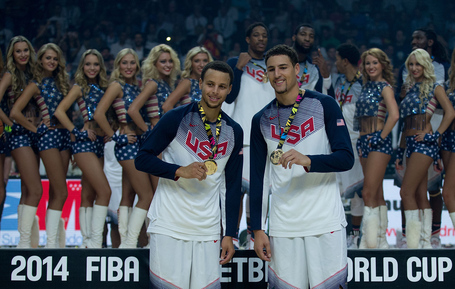 This debate came up on the Twitters a few days ago:

If you have to choose one of-

Who are you taking right now?

Media Day is exactly two weeks away. Get excited for the return of basketball.