Alec Burks: The Scorer We Need? The Downbeat #1453

More questions than answers arise for the upcoming season.

Share All sharing options for: Alec Burks: The Scorer We Need? The Downbeat #1453

The season is nigh approaching.  FIBA is over and soon we'll get to see the actual results of players' hard work during the offseason.  The Utah Jazz will need to make some hard decisions before they see any of the fruits of their hard work.  Extension time is upon us.  Unfortunately because of prior management/coaching the Utah Jazz's young assets are either unproven or lacking confidence.  Both Enes Kanter and Alec Burks are up for extensions.  The financial fates of Enes Kanter and Alec Burks may still be up in the air, but there is one media member that is bullish on one of them.  Zach Lowe of Grantland, who is known to have an unhealthy love for our poor starless team, had this to say about Alec Burks.

He's an effective passer on the perimeter, but that hasn't translated into a drive-and-kick game. Burks also doesn't shoot enough 3s, especially since he's nearly a league-average 3-point shooter who looks comfortable from the corners.

Again: The context was not ideal. Burks came off the bench for a bad team, facing clogged lanes and playing with point guards who couldn't bend opposing defenses.

Gordon Hayward is now creating his own news with his website.  Speaking of "Swoll Season", Gordon Hayward is getting swoll.  He's working out 5 times and week and it's easy to see that Hayward is a lot bigger.  I think the biggest question we all have is will these work outs help his three point shooting?

I usually do a basketball workout in the morning from 9:00 to 11:00. Then I go eat and after, I'll work out strength, conditioning and speed from 11:30 to 1:15. I do that five days a week. Once you get into a good routine, it really does help you out. The results have been undeniable. When I'm playing, I haven't been knocked off balance hardly at all. I'm just a lot stronger and when I drive to the hole, I'm able to kind of brush people off me and that makes me a lot better.  -  Gordon Hayward

Looking forward to preseason games?  There will be four televised this year on Root Sports.  I wonder why in this day and age why every single one cannot be televised.  It's 2014.  This is possible.

This website has every player in the league.  Probably why it's called EveryPlayerInTheLeague.  They have some awesome pictures of Jazz players (and everyone else). 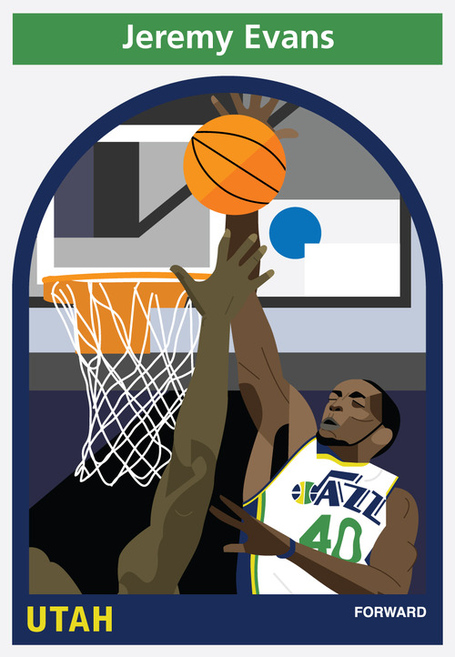 The Utah Jazz might have a three-headed monster on their hands with Gobert, Kanter, and Favors.  How they fare under Quin Snyder's tutelage but hopefully they turn into something that strikes fear into the opponents of Utah.  Ben Dowsett of Salt City Hoops had this to say about this soon to be feared trio.

As far as the first question goes, they'll be hoping for short memories, as Charles would say. With the necessary caveats surrounding small sample size, Gobert's time on the court saw an already bland offense crater spectacularly. A squad that was already just outside the league's bottom five in per-possession scoring posted an ugly 95.3 points-per-100, over a full point lower than Philadelphia's league-worst mark, per NBA.com. These figures were even worse (though on an even smaller sample) when he was paired with either Favors (82.0) or Kanter (88.4).

There's cause for optimism, however. For one, all this Gobert gushing is happening for a reason - he appears to have improved, perhaps somewhat drastically. Favors and Kanter are both at a point on their developmental curve where they'll be expected to have done the same to some degree. And my writing it ad nauseam doesn't make it any less true: the new coaching staff will be expected to leave their own imprint on personnel across the board.