They may not win much, but this coming year's Jazz will be entertaining. Also: more #NBARank, more future projections, Rudy Gobert in a wig, and your FanPosts.

We've talked in recent weeks about how good (or bad) next year's Jazz team will be, in terms of win total. I'm still not sure; there are too many unknowns (and known unknowns, and unknown unknowns). I'm excited for the season to start so we can sort some of that out.

The one thing I can confidently say is that the Jazz will be fun to watch -- certainly more fun than last year's squad, and possibly more fun than a lot of teams in the league. We have young, energetic players eager to prove themselves, and a coach who wants to push the tempo and move the ball quickly. It's gonna be fun.

USA Today, however, rated the Jazz only 23rd in "watchability" for next season. Subjective and hard to quantify as that term may be, they do cite guys playing for contracts (Enes Kanter and Alec Burks) and guys wanting to live up to them (Gordon Hayward and Derrick Favors) as reasons to pay attention.

The key, of course, revolves around Dante Exum:

Exum is the highest-profile player to come directly to the NBA from Australia, which is developing into a premier basketball country. His success could have a big affect on the international and college basketball scenes, as Australian players such as Andrew Bogut made their inroads in the NCAA in the past. Though he slipped to fifth, Exum's dynamic talent put him in the conversation to be picked first overall. Can he deliver? Las Vegas summer league was rough at times, but the potential was there.

Nothing we don't already know, but Exum will definitely be the biggest reason for neutrals to tune in to Jazz games this year. I daresay the team has never had a young player that commanded so much attention from those who might otherwise be uninterested.

But man, 23rd seems low, in my opinion. According to USA Today's ranking, that's "more watchable" than Detroit, the Lakers, Orlando, Indiana, Sacramento, Boston, and Philadelphia. (At least they threw us that Lakers bone.)

The fact is, of course, that few outside of Utah (or Australia) will make much of an effort to watch the Jazz, unless they're seriously committed NBA junkies. That's just a fact of Utah's market and status in today's NBA. But regardless, I'm really excited to see this team on the floor. And I feel certain that I'll stay tuned in to more games this year than last.

Last week, we took a look at ESPN's Future Power Rankings, which weren't as upbeat about the Jazz as we might have hoped. This week, ESPN Insider Kevin Pelton has a bit of a different look, based more on the advanced statistics of players currently on NBA rosters and how teams are likely to use their picks and cap space.

For the Jazz, the end result is roughly the same. Last week's overall ranking slotted the Jazz at 21st, while Pelton's predictions peg Utah at 20th. 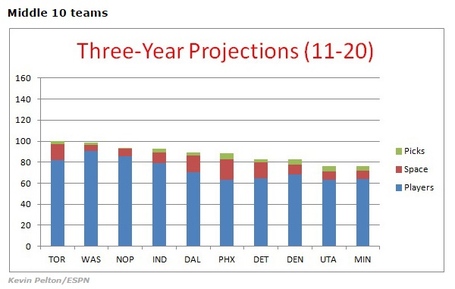 These sorts of predictions are interesting, but I refer back to those "unknowns." With so many new variables in the equation -- new players, new coach, semi-new GM -- there's only so much that we can quantify about the Jazz's future until they start playing games.

Hey, more FanPosts! Nice to see the conversations start to ramp up as the season gets closer. Leading off this week, MoabJazz takes a look at the metrics of consistency:

...we can see that both Hayward and Burke were pretty consistent players last season. I would like to see Burke have a much higher TS% consistency, and I think we will see that coming into his second year in the league. I also like that we can depend on them both to score 12-16 points per night on a regular basis. It would be interesting to see where Stockton and Malone would fall under these new stats and compare them to the rest of the all time greats.

The question now is whether that is what we want from the main guys on our squad? Do we want them to be consistent like this every night with a small chance of a scoring a lot, or do we want a star that has a lower consistency that we can see a breakout night every few games?

Next, Jordan Cummings shares his season wish list with us. Here's one point I especially liked:

5. Accountability. I want all players - no matter who they are or how long they've been in the league - to be held to the same standard. Make a bone-headed play, get guidance from the coaching staff. Make that same bone-headed play shortly after that, get benched and get an earful. Play lazy defense, get benched immediately. Take a bad, selfish shot, see a consequence for it. I don't care how Q disciplines the team. I just care that he actually does it and, more importantly, does it consistently. No more of this nonsense with veterans being held to a lower standard and "young guys" being on a tight, short leash. Every player should be expected to do the little things. Obviously every player is different and must be treated differently based on how they react to a particular coaching style, but I trust Q to know how to handle his players. (For example, it seems to me that Favors plays better when he's angry, so yelling at him to light a fire under his ass could improve his play on the court, while Kanter seems to be more focused when he's not worried about disappointing his coach or being benched.)

Finally, Xum asks us who Quin Snyder really is. You'll have to click through for the answer. Spoilers, and all that.

#NBArank is still a Thing that ESPN is Doing on Twitter. They got up to #375 yesterday, and two names in particular are of note for Jazz fans:

I don't necessarily blame ESPN for sticking Rodney Hood so low, but if he lives up to what we saw this summer, even in small doses, he'll end the season much higher than this.

As for JLIII, I'll just say that I'm glad that the Jazz now have two true point guards who rank higher than this. I'll be interested to see where ESPN slots Trey Burke and Dante Exum.

(Not that these rankings matter at all. Just offseason fodder. Gotta have something to argue about online.)

This is a video that involves Rudy Gobert doing...something, on French TV.

The audio isn't working for me, but Jazz fan @Pedrounet on Twitter (who deserves props for this) clued us in:

@theshums Rudy failed his free throws and ended up wearing this. Same for Nic Batum.

(hat tip also to @Eric_Debieu for the video. And to @DJJazzyJody for RTing and generally being awesome. Merci!)

(GIF courtesy of Moni, of course.)