The countdown is finally over, we have made it to the top of my rankings for Jazz players in this upcoming season.

Let me know if there's anybody you would swap in the ranking on this list, or if anybody outside of my top 10 would be in yours, I'm always curious to see other people's opinions.

Without further adieu, let us take a closer look at our defensive enforcer, and even-keeled leader by example: 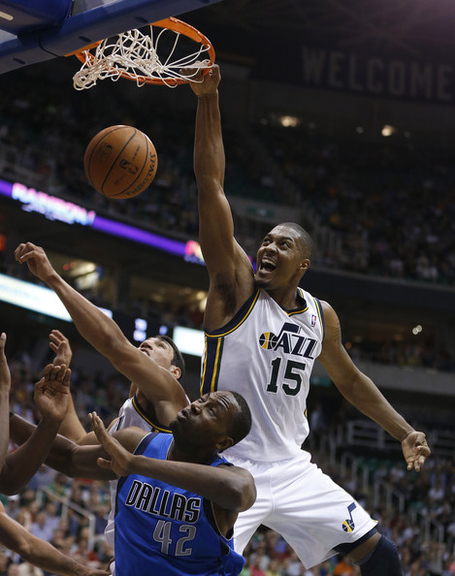 Derrick Favors grew up and played high school ball in Atlanta. By the time he reached his senior year of high school, his accolades started to pile up early, being named Mr. Basketball USA, Naismith Player of the Year, and all sorts of other nationally-acclaimed awards as a teenager.

He was also rated as the best high school player in the country by scouts depending on who you asked. I guess that's what putting up 38 points and 21 rebounds in a state championship game will do to you. (Also notable: High school averages of 28 points, 13 rebounds, 5 blocks, 3 steals, 2 assists.)

Derrick Favors then went to Georgia Tech, which is a fairly prominent university for NBA players with 8 players in the NBA currently from that school (Bosh, Jack, Shumpert, T Young are other notable current players). He only played there for 1 season before entering the draft.

Going into the draft, the top 5 looked set in stone for quite a while in this order:
John Wall, Evan Turner, Derrick Favors, Wesley Johnson, and DeMarcus Cousins.

Unsurprisingly this is the way the draft shook out at the top. Favors went to the Nets with the 3rd pick. However, the Nets wanted a star player sooner rather than later, so they traded us for Deron Williams while giving us Favors, Devin Harris, $3 Million cash, and 2 lottery picks which became Enes Kanter and half of Trey Burke. We definitely got good yield on that trade.

Upon arrival in Utah, Favors began coming off the bench behind Millsap and Jefferson for the next 2 1/2 seasons. Finally this past season, in Favors' 4th season, he was handed the keys to the Jazz's top big man position once those 2 big man went to other teams where they became all stars or all-nba players.

Favors did a solid job and stepped up not just his per game numbers with his increased minutes, but also increased his per 36 minute performance despite how slow of a pace the Jazz played last year (5th slowest in the league).

Despite this slow pace, Favors was able to up his production, averaging 13.3 points, 8.7 rebounds, and 1.5 blocks off of 52 FG% and 67 FT% (don't overlook his 1 steal per game either,'tis a very valuable skill for big men to have).

He established himself as the team's defensive anchor in the paint while remaining a valuable option on offense.

Favors was the best player on the Jazz by far in defensive rating (for those who played at least 500 minutes, I see you Rudy).

Advanced stats also placed Derrick Favors as the top player on the Jazz last season in PER, WS/48; shows how valuable Favors really is to our team's future.

What's really positive in this situation is that our arguably best player in Favors is signed with us for at least 4 more seasons, and states he really likes living in Utah while taking part in the community. He seems very genuine and down to earth in how he likes the area. Expect Favors to be around for a long time as a Jazzman! 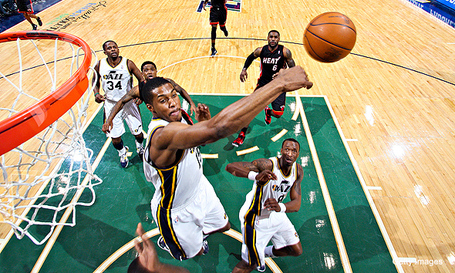 This year, expect Favors to be a leader on the floor, despite being a quiet big man. Coach Q has been preaching the importance of defense, and with this defensive focus expect Favors to lead the team by example of how to get critical stops when we run into clutch situations this season.

I'm excited to see how Favors plays next to all our other big men in various situations: Kanter, Gobert, Booker, Evans, Novak. Some nice combinations lie in there for certain match-ups.

I'm also anticipating what differences will see this year in a hopefully more fluid offensive scheme. Will we have more passing between our big men? More pick and rolls? Time will tell....

Favors has grown on me over these past few seasons, I see his value much more now compared to when he was first traded to us.

The best of all this is that our best player is still only 23!!! How crazy is that, NBA history tells us that Favors still has a few seasons before he even hits his prime!!!

Anyways enough drooling over all the what-could-be's. Here is my prediction for how Favors will perform this season for the Jazz.

Some modest gains overall, and most of the basic stats won't have most people going crazy, but this is due to his main value coming on the defensive end which is typically hard to quantify.

What I'm hoping Favors works on is his free throw shooting and developing more of his midrange. He already did a decent job of shooting more shots from further out last season (% of FGA further than 10 feet out last season: 25, year before: 22). Rooting for him to bump that up to 30% of his FGA or so to open up some spacing for whichever big man is playing with him most (most likely Kanter).

I also hope the Jazz shoot better from outside this year to allow for him to work with more space to do what big men like to do: dunk on some fools in their way.

Here's to hoping Favors continues to improve while leading the Jazz out of the pit of despair that was last season.

The Jazz youth were given the most opportunities that they've ever been given last season, and Favors is the one that stepped it up the most in my opinion. The argument for Hayward being the team's top player last season is there, but I would say Favors edges him out due to the defensive presence and reliable performance you can count on from Derrick.

Maybe Hayward, Burks, or some dark horse candidate takes over the team this upcoming season as the Jazz's top player, but if you're asking me, I would say the favorite for the top player on the Jazz next season will be Derrick Favors!

May he lead us to future success

In my rankings, Derrick Favors is the best player on the Jazz roster for next season. This makes him: