Did you know he's tall?

Share All sharing options for: Rudy Gobert is Tall: The Downbeat #1442

I, for one, am excited for the new NBA2K game to come out this year.  We're only a few weeks away from being able to command a team with Dante Exum at the lead.  Ronnie2K put this out yesterday as well.

Staying with rookie theme, who should have the higher overall #NBA2KRank? RT for Dante Exum, FAV for Shabazz Napier #NBA2K15

It's easy to see that Dante Exum won pretty easily.  I still don't know why so many people faved for Shabazz Napier, but c'mon people, there's a reason he dropped so far in the draft.  (Not to mention, he was getting posterized by LeBron in the last NBA2K trailer).

We're also not the only ones who have been questioning "Why can't Exum get any minutes for Australia?"  Nick from Basketball Breakdown is noticing the odd trend.

Why is Dante Exum playing so few mins for Australia??

Part of me wonders since Exum is the most talented player on his squad if this is more agent and endorsement driven than it is actually basketball driven.  Exum has big endorsement deals with Adidas and Foot Locker.  If he were to get hurt before he even stepped foot in a regular season NBA game it would be endorsement suicide for both Adidas and Foot Locker.  The mystique of Exum would lose its momentum.  Let's be frank, going to Utah is not a career move that begs for endorsement deals and Exum will need all the chance he can get locally here in the United States to build brand recognition with customers residing here.

I believe Exum wants to compete and play well in the worlds.  I'm sure the Jazz probably lie in the "Let's Be Cautious" camp as well seeing as they invested quite a bit in their suckitude to draft him.  The healthier he stays the better.  Still ... I WANT TO SEE MORE MINUTES FOR EXUM.

Your daily reminder that Rudy Gobert is tall. 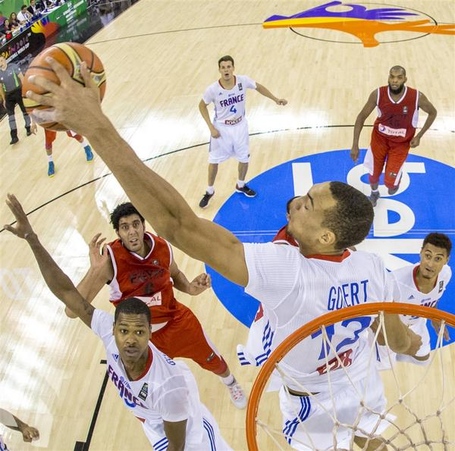 Rudy Gobert's PER36 for this tournament goes like this:

Gordon Hayward is starting to get some love nationally.  Jesse Blancart of Basketball Insiders believes Hayward is ready for a big step next season.

Gordon Hayward has significantly improved his game each of the four seasons he has been in the NBA. While Hayward may not be great at any single thing, he is a solid all-around player that still has plenty of room to improve.
Earlier this offseason, Hayward signed a max offer sheet with the Charlotte Hornets, which the Utah Jazz matched. The Jazz made a huge commitment to Hayward, who was looked to as a number one scoring option last season, as well as point forward.
Last season, Hayward averaged 16.2 points, 5.1 rebounds, 5.2 assists and 1.4 steals per game and shot 41.3 percent from the field, 30.4 percent from three-point range. These are very solid per game averages for a 24 year old forward. The major issue for Hayward was his shooting percentages, which plummeted from previous seasons.
To Hayward's credit, he was adjusting to his role as the number-one option on the team and the focus of opposing teams' defensive schemes. With young talent like Trey Burke, and Dante Exum now in Utah, there is a chance that Hayward will have less attention on him, and the opportunity to bring his shooting percentages back up next season. With Quin Snyder now coaching the team, the Jazz are more likely to increase the pace from last season, and spread the court more. With more possessions per game and more room to operate, it's quite possible that Hayward will have a big season.

It's here.  Swoll September.  Soon we will see all of our favorite players returning to their team's respective training camps showing how "swoll" they got from their offseason workouts.  Ian Clark is getting back to Santa Barbara to get some swoll in before training camp.

Wheels down in SB. Let's get to work @P3sportscience !