We are getting closer to the top of the list for the best Jazz players for next season. Here is the list that we have reached thus far:

It has been quite the challenging task ranking our top 5 players for next season as all of our F5 have their shares of strengths and weaknesses. After looking at several factors, I finally came to a decision for who sits most appropriately at 4th on this team in terms of how much they will impact the team next season.

Today's post will focus on our very own Turkish Bull, the Undertaker, the Pimp Daddy.... 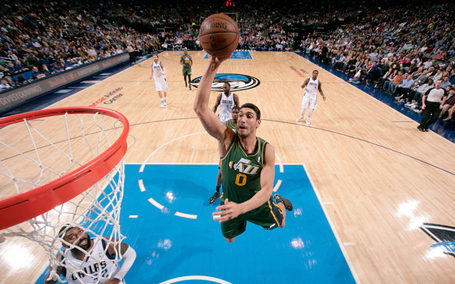 Kanter had a somewhat similar path on journey to the NBA that Exum did.

They both crushed their competition in international play in their youth. Kanter averaged 23 points and 17 rebounds per game in the Fiba Euro U16 tournament and 19 points and 16 rebounds in the U18 tournament.

They also both had major hype going into the draft without college experience to back it up. Both were also some of the youngest players in their draft classes. We shall see how Exum's NBA experiences compares with Kanter's over the next few years.

Going into the 2011 draft, the Jazz had the 3rd overall pick since they owned the Nets pick due to the DWill trade. I wasn't really high on Kanter at the time, mainly due to the fact that we had Big Al, Millsap, and a young big man who was the #3 pick from the previous draft in Derrick Favors.

I was shamefully on the Brandon Knight bandwagon, he looked like a really solid point guard in high school and college. The Jazz also happened to be in need of a point guard with Devin Harris being our starter at the time.

I also was really hoping that Minnesota was going to pass up Derrick Williams at #2 so that he would slide to us.

Luckily we dodged those bullets and ended up with a player in Kanter who I wouldn't trade for both of those players.

Non-Jazz fans or maybe even some Jazz fans who aren't into Kanter's game may think I am being a homer here, but I see him as the team's 4th best player on the team next year, with the potential to climb that ladder even higher this season if he addresses some of his weaknesses.

In my mind, Kanter has already played himself into a starting bigman spot at either the center or power forward (although I personally think he is better suited to play at Power Forward). We'll see in the next 12 months if the Jazz have Kanter in their long term plans (either by the end of October in extension talks or next summer in restricted free agency).

I'm hoping Kanter continues to improve and show that he can mesh well with Favors as a frontcourt tandem, or else the Jazz will have to start experimenting with other options.

For reference, here were Enes Kanter's per 36 minute stats from last season:

Modest basic stats in points and rebounds with low turnovers and okay free throw shooting for a big, but none of his other stats are anything to brag about.

The good thing is that Kanter is still a youngun, just turning 22 this offseason, he still has plenty of time to grow.

In fact, here is another solid big man's per 36 minute stats in his age 22 season:

Anybody have a guess as to whose numbers these are?

Hmmmm, well I guess I'll tell you, they belong to Karl Malone when he was 22 years old. Now I know the NBA growth curve typically goes by NBA experience and not age but my point here is not to give up hope on Kanter becoming an offensive powerhouse just yet, Kanter's age-22 season has yet to even begin. 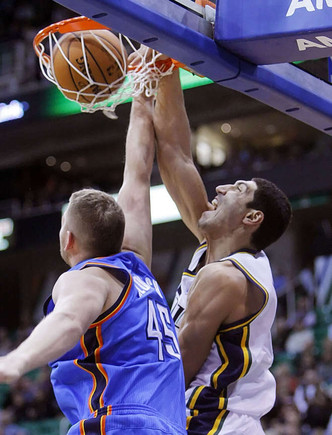 Kanter definitely has himself some competition this year for the starting position, just as he has every year.

In his first 2 seasons he was properly placed as 4th in the big man depth chart behind Big Al, Millsap, and Favors. Last year he alternated between the starter and the 1st big off the bench as Marvin Williams would knock him out of the lineup in order to make room for the most wonderful and legendary lineup that allowed us to play some of the slowest small-ball this world has ever seen.

The plus side is that Kanter at least got to play a career high 26.7 minutes per game even if it didn't feel like it.

In order for Kanter to beat out the other possible starting frontcourt possibilities, he is going to have to work on and/or be allowed to do the following:

If he can do 2 of the 3 outlined above, I can see him being the clear cut starter this teams needs. However if he fails to do so, do not be surprised when Booker or Gobert end up in the starting lineup.

Anyways, I have a good feeling that Kanter will be hitting career highs in starts and playing time this season, barring injuries. However, he will not be fully given the keys to the team's minutes due to the depth we have this year in the frontcourt.

With this taken into mind, here is my official prediction for how Enes Kanter will perform this season:

If Kanter gets right around the 30 minutes per game threshold, as he should, expect him to continually develop as one of the more respectable big men in the league, and a young one at that.

Hopefully Coach Q starts utilizing Kanter in ways that many of us have been clamoring for quite some time now, and allow him to continue to extend his shooting range while playing him in a system that encourages him feeding Favors in the low post.

Although it is by no means a lock, I would think the safest bet for our starting-frontcourt on day 1 will be Kanter with Favors.

Expect Kanter to be reinvigorated since he is no longer in the doghouse of the Jazz's previous coach, we will see whether or not Kanter thrives in the new system the team will be running.

There is still the off-chance that Kanter can work his way up as the Jazz's top offensive option as well, but I wouldn't bet on this. However, I do think there is a good chance for his offensive moves to continue to improve, and he could very well be an under-the-radar big who can average 20 and 10 in the peak of his career. Time will tell.

The future is looking bright Jazz fans, and having a team with 3 players even better than Enes Kanter is a good spot to be in for a rebuilding club such as ours.

In my rankings, Enes Kanter is the 4th best player on the Jazz roster for next season. This makes him: