Utah Jazz Forward Jeremy Evans Is Not From This World: The Downbeat #1443

Seriously, he's on some X-Men type ish. It's bonkers. Also: Everyone loves Rudy, more NBA soccer jerseys, which "tier" the Jazz fit into, and your FanPosts.

Share All sharing options for: Utah Jazz Forward Jeremy Evans Is Not From This World: The Downbeat #1443

Look at this. LOOK AT IT. This is NOT OKAY.

Humans are NOT SUPPOSED TO BE ABLE TO DO THIS. Jeremy Evans is, currently, on your computer screen, in front of your disbelieving eyes, touching a spot exactly twelve feet and nine inches above Planet Earth. It's the highest jump in the history of the P3 Sport Science Institute in Santa Barbara.

Aliens live among us, and one plays for the Utah Jazz. It's the only reasonable explanation. AND I, FOR ONE, WELCOME OUR NEW OVERLORDS FROM THE EVANSONIAN GALAXY.

Seriously, though, barring the possibility that Evans is an extraterrestrial, a mutant demi-human, or a Kryptonian gifted with superpowers by the light of our yellow sun (which I guess would still make him an extraterrestrial BUT I DIGRESS), this is just ridiculous. It strains credulity. And in the alternate universe Jeremy comes from where basketball is a sport entirely dependent on jumping and no other skill, he would be the greatest of all time. (All universes? All timelines? Yes and also yes.)

Unfortunately, we do not live in the world from which Jeremy Evans apparently quantum leaped (which is both a pun and a Scott Bakula reference BECAUSE THAT IS HOW I ROLL), and playing basketball at the NBA level requires other skills.

Truly, this is the darkest timeline.

I mean, no one knows how many minutes Jeremy will claim in Quin Snyder's rotation this season. But the fact that the Jazz acquired two other forwards in Trevor Booker and Steve Novak -- both with skills Evans does not possess -- bodes ill for our favorite dunk artist.

You'd think, surely, that given Evans' youth and relative lack of playing time, he hasn't reached the peak of his NBA potential. But it's unclear whether he can earn enough minutes to develop that potential, even on a roster like Utah's. And given that this is Jeremy's last year under contract, his show may get canceled before we learn if he can make it back to his home dimension and if you get that reference you really watched too much bad sci-fi in the '90s.

Anyway. I hope the Jazz figure out what to do with Jeremy. You know, before he has to return to the Stargate. OH GOSH I CAN'T STOP.

Okay, I promise to stop making nerd references. (That's a lie. I don't promise that at all.) Anyway.

Rudy Gobert! He's tall. He's playing for France in the FIBA World Cup. And he's doing well! So much so that national NBA writers are getting jealous.

Rudy Gobert's NBA future becomes more interesting to me every time I watch him. A guy I'd like to have in my organization.

So, yeah. Rudy's making a developmental leap rather than a quantum one (I TOLD YOU I DIDN'T PROMISE), and he's an asset people as smart as Zach Lowe are coveting.

For a late first-round pick -- one the Jazz had to trade for, even -- that's hitting the jackpot. Or at least, it will be if Rudy can transfer the growth he displayed during the 2014 NBA Summer League and the current World Cup tournament to the rigors of the NBA regular season.

The good news is that, unlike Jeremy Evans, Gobert doesn't have as many bodies in front of him on the depth chart. He's the first-choice backup center, and his post defense means he can pair with a variety of frontcourt partners who lack that particular skill. And he has an improved sense for putback baskets, so he doesn't need plays run for him to have a positive (if limited) scoring influence.

I never would have believed it at this point last year, but Gobert might have a brighter long-term future with the Jazz than Enes Kanter. With Kanter's contract extension looming, both players' performances this season could have a drastic effect on Utah's roster going forward.

FanPosts! Glad to see we've got a fresh batch this week. First up: Aged fan has done some calculations on the total number of  NBA minutes each Jazz player has logged and how that total relates to their respective ages:

I've been intrigued as the Jazz sign players to these new partially guaranteed/perhaps Stampede roster spots. It seems like these players are all about 23-24 years old. I don't know if that has any significance, but I wondered if these new signees are older than the main roster guys.

It turns out they are, by just a bit. So I wanted to share this and a few of the other things I found in a quick analysis of the current roster (nothing huge, but it's good to know where things stand). I'll list the facts first, and explain the data/assumptions at the bottom.

From this comparison of statistics we can get an idea of how Trey's career might turn out. JuMu did a great job in his preview of Trey Burke for the upcoming season and compared him to Mike Conley like others have before. I think that is a fair comparison, but I think it is interesting how much he compares to Deron Williams. I am also excited about his Turnover % (TOV%). It is lower than everybody on this list including Chris Paul. He also has a high assist percentage which is exactly what we were looking for when we drafted him as our PG.

Finally, FanPost All-Star JuMu is plugging away at his player preview series. Here's his take on Dante Exum:

Exum is still fairly raw for a guard picked in the top 5. That said, he is oozing with potential and hopefully we see him make some big strides in his rookie campaign.

He's likely to struggle with shooting inconsistencies this season (Jazz better have a good shooting coach for the roster this year).

If summer league as well his role on Australia's national team is any indication, it looks as if coaches are experimenting with him as being an off-the-ball shooting guard (probably due to his height). Personally I would prefer seeing Exum being the point guard with Burks being the slashing 2-guard, but we'll see what Coach Q decides to go with this season.

Thanks for the posts, everybody! Go get yourself a beverage -- you've earned it.

I'm not sure, because news and links are so very, very scarce this offseason, but I don't think we've linked to this ESPN Insider piece from last week, which sorts the 30 NBA teams into "tiers" based on predicted win totals. Our Jazz slot into the second-to-last group:

Stuck in the middle
(Teams that made the playoffs in less than 15 percent of the simulations but averaged more than 25 wins per simulation, ordered by playoff probability)

So this model pegs the Jazz on about 28 wins, with five teams below them (including the very bottom tier). That's also good enough for third-worst in the West, so the playoffs are obviously out of the question in this prediction.

We've batted the win-total question around for what seems like ages, but I'll still be very interested to see how the Jazz perform in the standings. On paper, this is a stronger team than last year's 25-win squad. And some bad teams around the Jazz haven't improved much.

What do you think? Is 28 wins a fair number? Are you betting the over or the under?

I can't get enough of these NBA-teams-as-soccer-jerseys mashups. Here's another recent gallery. Unfortunately, I'm not a huge fan of the Jazz offering: 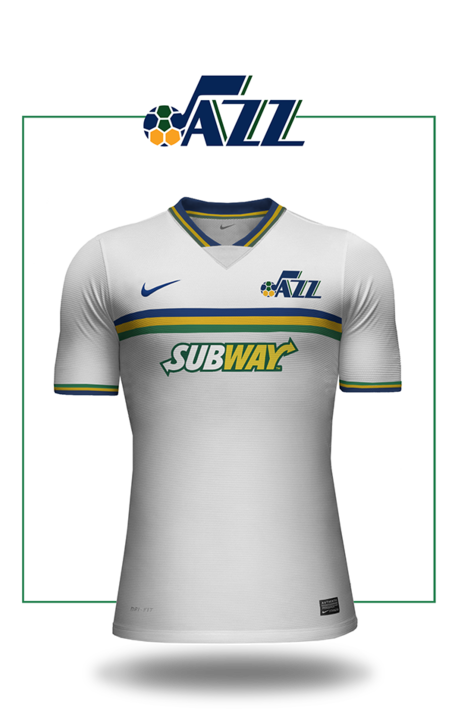 I'm pretty sure the designer chose Subway as the jersey sponsor purely for the logo's similar green-and-yellow color scheme. (At least, I doubt he's aware of the notable Raja Ball endorsement campaign.) Anyway, this whole look is just really plain, although I adore his take on the J-note.

Any amateur (or professional) designers want to take a stab at a Utah Jazz FC kit? I'd love to see your ideas.

(Do make sure to click through to the whole gallery, by the way. Some of them are gorgeous. The Nets and Blazers are two personal faves.)