Derrick Favors will average 10 assists a game or something like that.

Share All sharing options for: Favors - The Next Stockton???: The Downbeat #1465

"I told you I was gonna get 10 assists in one game, and @Enes_Kanter is a big reason why. Watch him start hitting 3's!" @dfavors14

If Enes Kanter is shooting threes this year and hitting those threes ... oh boy ... look out opposing defenses. Be ready to pick your poison. Do you deal with Favors on the block or Kanter in the corner? Oh, and, by the way, Kanter is going to come crashing down for the offensive rebound after Favor's post action. Have fun.

It's been publicized at least at this blog that Derrick Favors has assimilated himself into the borg of Utah. (Though I still haven't seen him prepare a potato casserole dish for his neighbors). Here's what Derrick had to say about this offseason.

"I made a decision to stay around more this summer and see what Utah had to offer. And I think I made the right decision." @dfavors14

Derrick favors: Utah is like a second home to me

Even if Derrick Favors doesn't achieve his offensive potential, he's a great defensive anchor and great in the community. I think we'll see a huge difference with Favors this year because he's settled down in Utah and trained in Utah.

It has been brought up time and time again: Can the Utah Jazz recruit big stars to their small market? Well, Derrick Favors sure is going to give it his best shot.

Derrick Favors just shook my hand at Jazz Media Day. "I saw your shot. I was like, 'Look at Jody. Sign him up.'" 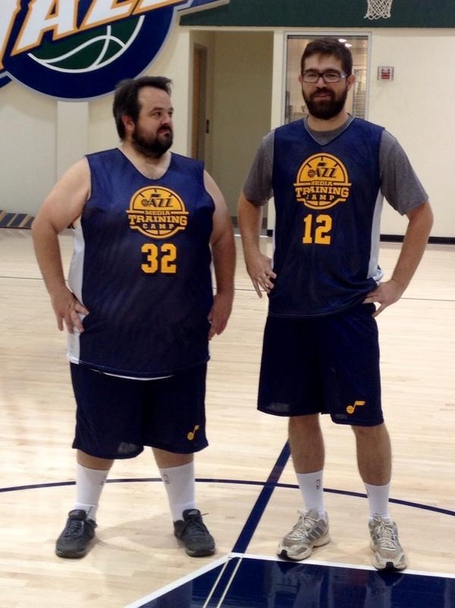 The communication between Derrick Favors and Gordon Hayward has been light this summer.

"[Haven't been in contact with Gordon Hayward] not that much. He's been busy with the national team. ... We've been talking since he got back and, ya know, both of us ready for it. ... We're just trying to prove people wrong." --Derrick Favors

On the other hand, Quin Snyder and Derrick Favors have been communicating every other day.

Derrick Favors was asked what he worked on this summer.

"Working on my conditioning a lot more, working on my body, tryna lose a lot of body fat. Working on my midrange game and expand my game. Even more so than last year." -- Derrick Favors

He was then asked about how Dennis Lindsey said he could achieve more levels defensively. Derrick responded:

"There are more levels [for me] to reach offensively and defensively." --Derrick Favors

With Quin's new offense and defensive schemes Derrick Favors is ready to finally be unleashed. He's going to have the spacing on one end and because of the speed at which the offense is going to go he's going to be able to use his athleticism to take advantage of opposing defenses. It's going to be a fun year for him.