Young whippersnapper KOC, Burks on a boat, pizza vs. 10K

So, "Where will the leadership come from on this team" continues to be a topic of discussion every time a member of the Jazz front office is interviewed on 1280, with every interviewee doggedly continuing to express hopes that Gordon Hayward will be that guy. In this week's offering, Randy Rigby cites "the marrying of Gordon Hayward"* as one of the reasons he is hopeful that Hayward can become a leader on this team. *File this under #onlyinUtah, yes or no?

Number one, I’m really hopeful that with what, the marrying of Gordon Hayward, of maturing that he’s had in the last couple years, the indications I’ve heard about how his body has really grown and developed, I’m hoping that’s gonna translate into, also, mentally, his, also, growing and developing into a real leader as an NBA player. And I think his experience of going out and now playing with the USA team, of seeing what, you know, qualities it takes and that competitive nature and that desire to be the best, I’m hoping we see some real leadership from Gordon. He’s, now, can take the contract things and put it behind him, and now really focus on playing the game and leading our team. I’m looking, that, as an example of leadership. I think, now, we’ve had another year, Trey Burke, is, sorry, Burke is one that also, that I think has, Trey, is one that, I, wants to be a leader. But I think he needs to continue to work on his own personal game, and you know, you need to, you can’t just talk the talk. You need to be, do it by example first.

I can't even begin to remember how the Google rabbit hole that led me to this began, but I came across this article from the Gaston Gazette. One of these men is Kevin O'Connor. Without looking at the names, can you tell which one is KOC? 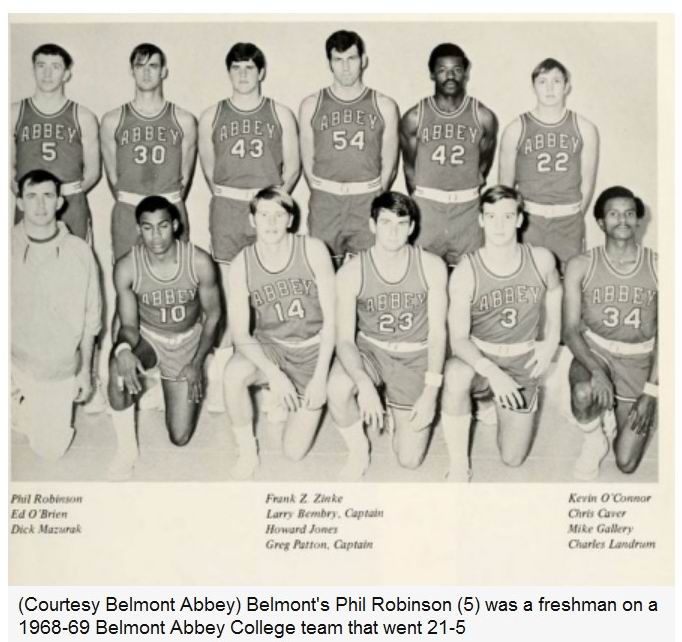 Side Note: According to KOC's Wikipedia page, he captained the Belmont Abbey team in the '68-'69 season. It would appear from this pic that his Wikipedia is inaccurate.

9. Jazz Enes Kanter
Trey Burke
Rudy Gobert
Dante Exum
Rodney Hood Burke and Exum could each become one of the NBA’s better guards, though it’s unclear whether they can reach that level together. Kanter hasn’t panned out as hoped, though it’s soon to close the book on him. Gobert, as Zach Lowe of Grantland detailed, has intriguing upside, though he didn’t play much last season. Essentially, it’s easy to find reasons for optimism, but just as easy to find reasons for pessimism.

Click through to see the rest of his rankings. Like I talked about a few DBs ago, it seems like everyone is so eager to say right this minute whether Burke and Exum can play together...before Exum has even played his first NBA game. With Gobert and Kanter likely to see different/new/expanded roles this season under Quin Snyder, a lot remains to be seen. Agree or disagree that the Jazz come in ninth?

Jazz Marketing question of the day... Would you take $10,000 tax-free OR an unlimited pizza-for-life card?