A preface to today's downbeats.  As most of you know I work as a manager of an Apple Specialist store.  As you can imagine it's a crazy day for me today.  So without further adieu let's get to the downbeat!

This comes via Moni at her blog Jazzfanatical. Dennis Lindsey says one thing he'd like to borrow from international basketball is the flow of the game.

I think a great thing, if we could ever figure it out-and look, TV money pays all of our salaries, right? That's the reason why we have jobs, is because the media are associated with television. But I think if we could learn from international basketball where there's no live ball timeouts, to keep the flow going.*

I think it's the one lesson we can learn from soccer. It's not really scoring that makes European football the world's most popular sport. It's continuous action.** And I just remember, maybe it's me being an old fogey, but back in the '86, '87, '88, and the Celtics-Lakers, and that Laker team that could go on that 27-4 run, and there wasn't as many TV timeouts. There wasn't as many coaching timeouts, so you could get that uninterrupted action.

I, so when you go and see a basketball game in Europe, the game is not as athletic, but the game flows better because there's less timeouts, there's less TV timeouts.*** One of my pet peeves in college basketball...is that situation where there's a timeout, there's a possession back and forth, and then there's another TV timeout. And why we as fans put up with that situation, it makes our game less watchable.****

So I really believe in continuous action, so if we could eliminate a timeout and figure out a way for our TV partners to still sell ads, you know, where they're going to want to sponsor our game, it would be good for all parties involved.***** ...

There's that phenomenon in every sport, where what may be good for you to win the strategy, or win the game around strategy in that particular game, it may make it bad for the fans to come watch it. So are you really defeating the purpose at the end of the day?

While I think this might garner a warning from the Commissioner's office about how to talk about your sponsor's, I couldn't agree more.  The game of basketball is about flow and right now because of TV timeouts it's being broken up like it's baseball.

BE ON HIGH ALERT FOR A MAN RECENTLY GIVEN 63 MILLION DOLLARS.  THIS IS NOT A DRILL.

(In case you have forgotten, remember that Jeremy Evans and Gordon Hayward waited for 40 minutes to eat at an Olive Garden in New York City.)

RUDY GOBERT DOESN'T SUCK IN NBA2K ANYMORE!  God's be praised.  The Jazz have a 7 footer who does not hold a 50 rating. 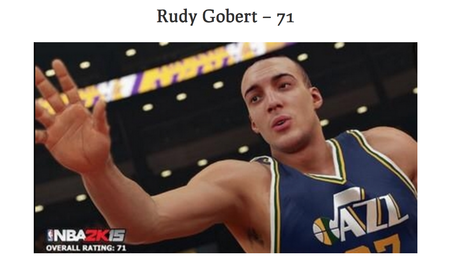 Speaking of Rudy, Rudy thinks Raul is ready.  You should think Raul Neto is ready for the NBA, too.  After all he's lighting up NBA studded squads left and right.

Cant wait to see raul in the league..#thatboyisready

Last but not least.  If Gordon Hayward dropped cash on Olive Garden's All You Can Eat promo right now, what would the headline read in the newspapers the next day?  Post in the comments.