The team's best shooter and possible steal of last year's draft clocks in at #5 today. Will he be able to make a sophomore year jump this season?

We covered Burke extensively in the last installment as well as the comments. Feel free to click his post last year to see what type of mindset we had about how the best rookie of the West was going to perform his 2nd season and you'll quickly see why many felt underwhelmed by his performance.

Here's to hoping that he bounces back and gets a jump in performance and confidence this season and that he can play like the player the Jazz expected when they traded up to draft him.

Now, on to this year's hopeful sophomore: Last season I had positive yet modest expectations for Hood. For the most part, he performed close to what I projected:

Yet, even those his stats last season may not have been overly staggering, the eyeball test with the composure and maturity Hood displayed on and off the court have instilled a certain level of confidence into many Jazz fans of his skills going forward.

I mean just look at his leadership skills on full display here:

This moment just shows how much fun these guys are having. I see you, Rodney. #CHAatUTA #JazzWin pic.twitter.com/hOToocPpLz

But seriously, Hood stepped us his game in a big way for a rookie last season. I think I would have projected Hood over Exum for this season after looking at their stats again.

Hood's rookie year really was a tale of 2 seasons. Take a look at his pre- and post-All Star Break numbers:

Pre-All Star Break Rodney Hood played terrible, I'm not going to sugarcoat it. We were better off playing D-League players over him at that point. But then, Hood improved no less than our whole team seemed to improve after the All Star Break last season.

For whatever reason, whether it be improved team chemistry, Hood finally getting over those pesky injuries or just Hood finding confidence in his game on the NBA-level Hood stepped up. If Hood played like that all season, Hood would have been in the running for All-Rookie first team.

Even with his lackluster first half of the season, Hood still averaged the 6th most points out of rookies and was one of the best 3 point shooters from his draft (Joe Harris and Shabazz Napier were really the only other rooks on his level from long distance last year).

Now this may be small sample size theatre, but Hood played at least 30 minutes in 7 games last season (Memphis, 2 vs. Sacramento, Houston, Detroit, Golden State, and Portland). His stats in those 7 games: 33.3 MPG, 19.3 PPG, 3.4 RPG, 2.7 APG! Holy smokes! We have 2 stellar options for shooting guards this year in Hood and Burks, this is going to be fun, so long they stay healthy.

One last interesting graphic I need to show you:

This graph is not just offset by out-liars of games either. If anything, the small sample size months were in his worst months and injury-impacted months. Games by month: 2 in October, 5 in November, 15 in December, 2 in January, 5 in February, 14 in March, and 7 in April.

Whether Burks or Hood starts, both are going to have a huge role this year! 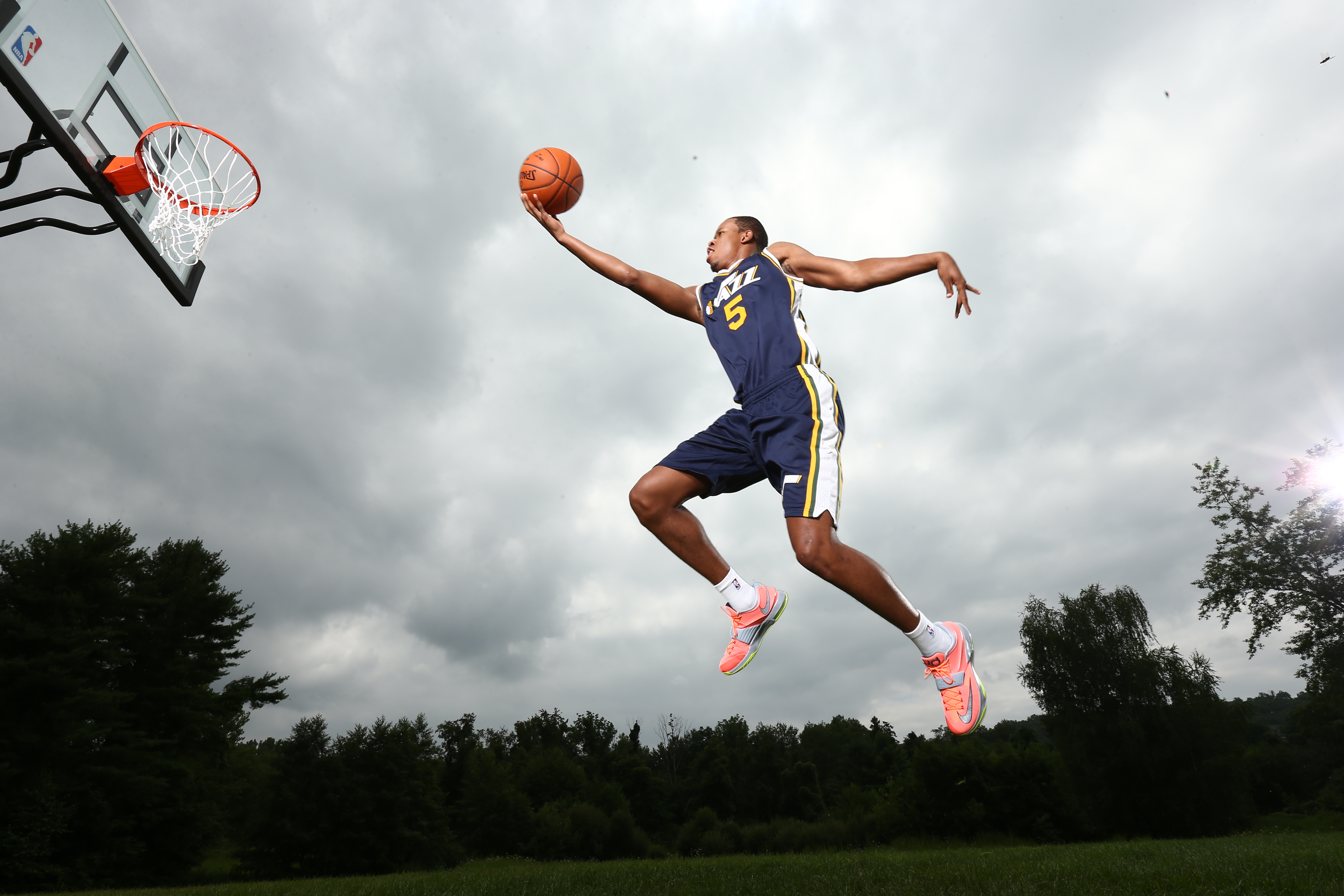 With our point guard position being our weakness this year, we're going to need both of our shooting guards to carry the backcourt to a level that will allow us to march right into the playoffs.

Our shooting guards were plagued with injuries last season, it may still be a factor this season but hopefully that hex is behind us now.

Expect more of the magic that Hood sprinkled our team with post All Star Break. If he manages to keep up those averages he's already going to be getting notice as a sharp sophomore on the rise. It is too early to tell whether Hood or Burks will be starting, or if Quin will choose the route that have been many-a-Jazz-fan's wet dream and start both of them (don't bet on it).

Regardless of who starts, expect Hood to be posting stats at around this level:

Rodney will likely either be playing our sixth man role or be our fourth best starter. I fantasize about a Hood buzzer-beater in a playoff victory someday, please come true soon!

Hood was featured as a shooter in the draft, and he is a solid one at that, but he is also good at penetration and making plays for himself. He also played within the system very well for a rookie last season and has good size for either wing spot.

He often got outsmarted on the defensive end and would get baited into the cheap ticky-tack fouls, but you could tell that Hood was putting in the effort and his defense was not nearly the liability that his scouting reports were saying about his college career.

Looking forward to seeing how many times Hood tops this performance this year:

In Lindsay we trust.

Hood may be a dark horse most improved player candidate this season if he's firing on all pistons like he finished last season!

A more modest expectation is that he gets us a double-digit scoring average this season as well as remain the best shooter on this team. Hood is the player that we were hoping CJ Miles would be one day.

A caveat to this hype: do not be completely surprised if Hood has another injury this year. The biggest risk factor for Hood this year will be his feet's injury history. Hopefully most of those past injuries were flukes rather than a worrying trend for our Prince of Threes.