Today we break into our team's big 3 with the humble and perpetually overlooked hustler of this team.

Many in the Jazz fanbase were high on Burks going into last season, with many saying he was underrated at 3. He probably played like our 4th best player or so when he was on the court before going down 27 games into the season. I bumped him down due to the emergence of our starting frontcourt.

Expect Burks to carry the offensive load of the backcourt this season and hopefully add some playmaking and defensive effort if he wants to elevate his game.

Okay, I can already hear the pitchforks getting sharpened. What else could Favors possibly have done to keep himself from dropping 2 spots from last year's previews?

Well, looking at his year-to-year improvement, he did a great job last year. However, looking at last season's team, there were 2 players who did even better on the team and helped the team break out the 2nd half of the season.

And I just want to get something straight, the Jazz have a big 3 now, the gap between our big 3 and the rest of the team was immense last year. Just take a look at our team's 3 best players combined win shares compared to the rest of our top 10 players combined over the last few years.

Believe it or not even with our lack of household names (if you're not a Jazz fan), the Jazz have their big 3 now. You'll find the number of teams with a better 3rd best player than ours dwindling as our core continues to develop and get us some playoff action extremely soon.

I think whoever I put at #3 this year could be considered underrated as really all of our top 3 players are crucial and could be considered our best, but Favors drew the short stick this season by a hair. And for those who think that this ranking is completely off-base, Favors did come in 3rd on our team last season in a few metrics, including win shares. 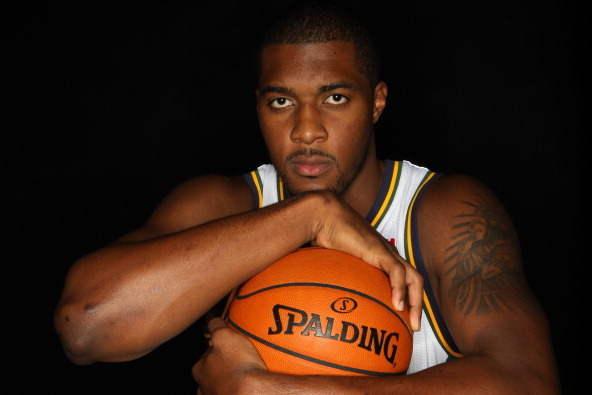 He had career highs in PER, True Shooting %, Usage, Offensive and Defensive Win Shares, Box Plus Minus, and VORP. This was his first season with a positive offensive box plus minus! He put the work in and it has begun to show.

Favors performed almost exactly in line with my projections for him last season. He slightly overachieved in points and the advanced stats and slightly underachieved in rebounds:

I cannot gush enough about how far Favors' offensive game has come over the last few years. Just like former Jazz great Millsap, he was seen as a limited offensive player early in his career but later on fully blossomed on both ends.

Take a look at where he's taking his shots these days:

Favors also averaged a career high 52.5 field goal percentage this year. He's somehow shooting further away more often AND at a higher percentage. That is outstanding and goes to show the leaps that Favors' offensive game has made over his young career.

Expect Favors to continue to get more looks on the offensive end since his frontcourt partner Gobert is still very raw offensively apart from dunks.

Trading away Kanter did hurt Favors' offensive rating a bit last season due to him becoming the primary scoring big man. However, with a healthy Burks and Hayward helping keep the defenses honest and another year under Favors belt, expect that to continue to steadily improve.

This is what I expect out of our perpetually underrated big man this season as he helps lead this team to (hopefully) the playoffs this season:

17.5 points per game may seem like a lot for Favors to average, but his averages the last 3 years are 9.4, 13.3, and 16.0. His game just keeps growing, it would be unwise to bet against this 24 year old rising star from improving still.

Favors has found himself a place in Utah, its community, and his role in Quin's system.

He is the prototype power forward just a notch below the superstars of the league. He will own the other team most nights on both sides of the floor and can be counted on as one of our most consistent players.

Derrick Favors: Most underrated player in the league