This year's Top 10 Jazzmen according to JuMu:

But JuMu, you can't just go and predict someone to be your team's best player when they haven't even been a main piece of your team for more than half a season especially while you have other more complete well-rounded players.

List of things Gobert led the Utah Jazz in last season (not just the 2nd half of the season, the whole season!):

9.3 Overall Win Shares, 15th in NBA (Why yes, everybody ranked above him did play more minutes than Rudy, thanks for asking)

5.1 Defensive Box Plus Minus, 2nd in NBA (Andrew Bogut)

Rudy Gobert was the best player on the Jazz last year and a fringe top 10 player in the league, despite coming off the bench half the year

This guy was 6th in our team in minutes last year and still achieved stats on par with the best of the NBA last season.

Yes, Rudy has a low usage, and doesn't shoot well outside of 3 feet. But that's okay, neither did Ben Wallace and he seemed to do okay getting himself in the MVP conversation and being a top 10 player for much of the 2000s. That's where Rudy's trajectory is primed to be.

Rudy Gobert is our defensive cornerstone with potential to be a top 10 player in this league!

If Rudy has an identical season with identical stats on a team that makes it to the conference finals, you hear Rudy's name tossed around in the MVP conversation on the regular.

I don't think you really have much of a case about saying that about anyone else on our roster. All Stars in Hayward and Favors perhaps, but not serious MVP consideration. 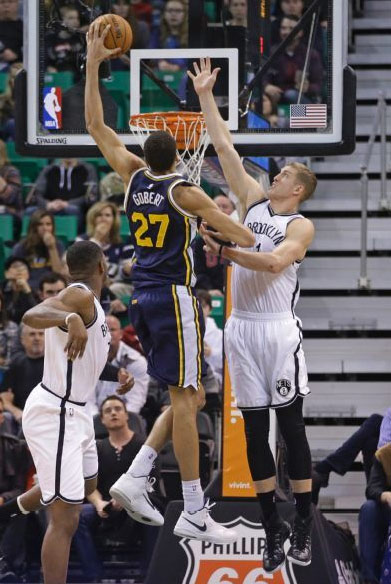 As already covered, Gobert already led this team in many categories last season, despite not starting until the 2nd half.

If he manages to continue even 80% of the level of stellar play that he did for the 2nd half of last year, he should make an All-NBA defensive team.

When projecting Gobert's performance this upcoming season, there are a few things that should be noted.

Gobert has been scouted more heavily, teams are going to have more intensive gameplans of how to break the Favors-Gobert whirlpool of blocks and despair in the paint.

Gobert had a busy summer in FIBA play while finishing a disappointing 3rd place (for them), they were hungry for gold, but an immortal performance from Pau Gasol kept that from being consummated.

Exum is out for the season; you are slowly going to hear the narrative that Exum being out for the year not greatly impacting the Jazz's playoff chances change over the course of this season.

The Exum-(Insert SG of your choice)-Hayward-Favors-Gobert lineup was a defensive masterpiece. Hopefully whoever is filling in the guard positions this season can do at least 1 of stepping up on the defensive end or balancing out the lineup with some efficient 3 point shooting or savvy off-ball play.

I have high expectations for Gobert, ones that may come to disappoint at some point. But there was no way I was going to sleep on Gobert 2 seasons in a row! I mean ranking him 7th was comical!

Here's my projections for him this year:

I'm sure there'll be quite a few disagreeing with me placing Gobert at #1 on our team for next year, I may even be in the minority. That's just fine by me, we just place higher value and focus on different factors of the game and I'm willing to take the bet that Rudy is going to continue to build off the high level of play he achieved last year.

I'm just glad that this is debatable and that we have a big 3 of players on track to lead us to better times!

And like I said before, I can see any of Gobert, Favors, or Hayward having the best season on our team this year. Really I'm splitting hairs at this point, while I project them all to have between 9 and 10 win shares this year, while our 4th best is down at 5 win shares. We've got good players, now let's see if they can actually accomplish any team success this year.

My money is on Gobert due to him already leading the team last season and him being the freshest in term of NBA rotation minutes. He still may have another jump in his game! This guy went from playing less minutes than Miroslav Raduljica in his rookie season to the cornerstone of THE best defensive team in the league in less than a year!

We are going to go as far as our big 3 (and any other surprising contributors) can take us, hopefully all of them including Rudy are up for the challenge!

Thanks for taking the time to read through these rankings, can't wait for this season to start!

JuMu, over and out