SB Nation's Mike Prada breaks down a lot of film, and see Hayward's value even if other NBA coaches do not.

I think it's obvious that Gordon Hayward is "the man" for the Utah Jazz this season. It's a downer that he didn't get picked for an All-Star reserve spot this year, but his play is definitely turning many heads. The people who actually know basketball the best know that G-Time is doing things. It wasn't an accident that he was part of the USA Men's basketball program this summer. (He's been in their pipeline for a while now) And it's no accident that he's play like a legit first option and making things work for this young team.

SB Nation's Mike Prada lists him FIRST on his Film Room All-Star selections. Here's the full post to read about the other players named, and an excerpt on what Mike wrote:

Franchise player? Maybe, maybe not. But while Derrick Favors and Rudy Gobert get all the press, it's clear Hayward is by far the Jazz's most important player. His shooting has rebounded to normal levels after falling off last year and the rest of his game continues to incrementally grow. Without him, the Jazz's offense dies: Utah scores 106.3 points per 100 possessions when he's on the court and a horrid 93.5 when he isn't, per NBA.com. The former mark is better than all but seven teams; the latter is worse than everyone but the 76ers.

It's Hayward's versatility that makes him a Film Room All Star. If basketball had five-tool players like baseball, Hayward would qualify. He can shoot from distance, score in one-on-one situations, make essential passing reads, defend his position and run in transition. The Jazz need all of those skills because they don't have great point guard play and are learning an offense that requires constant ball and player movement.

For someone that's criticized so often for being unable to create his own offense, Hayward sure has a lot of moves. Only six perimeter players score more points per possession on isolation plays in the entire league, per Synergy Sports Technology*.

Hayward succeeds because he's strong, quicker than folks realize and equally capable of going left and right. He mixes his drives up with a series of crossovers; every so often, he'll confuse a defender by going away from a screen or even throwing a behind-the-back dribble in there. He's one of the rare players that likes to step back going to his right, which is very difficult to do because it's hard to square up from that position.

He also has unique ways to create space. Hayward can drive his body into a defender's chest, then swish 10-foot leaners while contorting his body in mid-air. He's not even looking at the hoop when he begins this floater.

This is all made possible because Hayward's footwork is impeccable. Separation is created not by what happens up top, but by what happens down below. Hayward jams his feet into defenders, whether it's to step back or block their angle to cut off his drive. He can appear small driving into the trees, but he makes himself bigger and stronger because he takes away the opponent's strength. 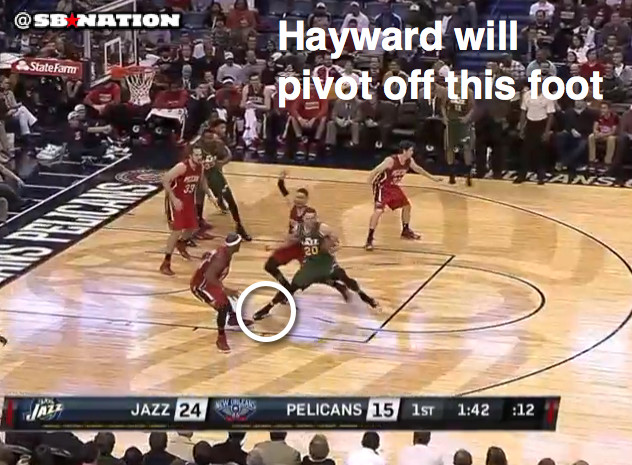 This also explains why he draws fouls on 22 percent of his isolation plays and 16 percent of his overall possessions, per Synergy. By contrast: Kevin Durant is at just under 21 percent on isolations and just over 14 percent overall. When defenders have their space constrained, they tend to foul.

Combine that with his excellent spot-up shooting, developing pick and roll game, speed and athleticism, and Hayward is quietly one of the league's best guards. Don't be too late to jump on his bandwagon.

I think that Gordon is only going to get better. I'd argue that he's a SF, not a guard, but whatever. It's not a big enough deal. Hayward, on the other hand, is a big deal. And soon enough, he'll move from being a Film Room All-Star to being a Western Conference All-Star.