I've been re-watching the entire series of Chuck lately. Considering its ratings while it was on TV, odds are most of you haven't seen it. Go watch it. It doubles as the true-life story of our own uber-Jazz fan and CIA secret agent Moni (alias Sara Walker).

It's going to be great when we can talk about last night's/tonight's Jazz during this time of year again. Hopefully next year.

In playoff news, I found myself letting out a couple little cheers for LeBron's game-winner last night. I did so for a couple of reasons.

Morgan Grimes can attest: it's always more fun when you're part of a team:

If the Jazz can get back to the playoffs next year we all know it will be because the defense we saw post All-Star break has become the team's norm. I recently saw a stat that kinda blew me away:

According to ESPN, the Jazz held opponents to 89 ppg after the All-Star break. Now, hopefully we have all given up using this stat as the best way to measure's a team's defense (please, let's all use DRtg), but still this stat just kills me. 89 points per game? In today's NBA of spacing, 3's, and efficiency?

On one hand it's not a great stat to measure an effective defense. On the other hand, it's one that really made me stop and think: "Whoa! Seriously?"

After years of lousy defense, I kind of felt like Sarah and Casey watching Kung-fu Chuck for the first time:

Speaking of "kinds of games" the almost unbearable Rockets and Clippers series is happening. For a couple years now, I've thought the Rockets were the must unwatchable, unfun, painfully miserable to watch quality team in the NBA. But sending DeAndre Jordan to the FT line over 30 times?

I've had some really mixed feelings about FT's for a long time now. On one hand, they are the most efficient way to score besides dunks. On the other hand they're not fun. In terms of wanting my team to be successful, I'd like the Jazz to get to the line as much as possible. In terms of enjoying the games, the closer the total FTA for both teams is to 0, the more I enjoy the game.

It's kind of like walks in baseball. Walks are helpful to teams wanting to win. They are also not nearly as fun as what happens when the ball is put into play. And intentional walks are almost as fun as sending DeAndre Jordan to the line over 30 times.

I don't know what the answer to this is, but I do think it's something the NBA should address. Coaches should worry about strategies to win (even if the intentional fouling strategy is dubious). It's the NBA's job to make the game as enjoyable for fans as possible. And while I totally get the "well, learn to make freaking FT's" point of view (and I honestly share it), I also want the games to be fun ... and fewer FTA's overall is simply more fun.

How would you all go about solving this? Should it be solved?

Congratulations to former Jazzman Ronnie Brewer on his graduation:

Athletes can only compete so long, and I sometimes wonder what it would be like to have to finish a career I love in my mid-30's. I always like to see guys I like set themselves up for a good future. Way to go Ronnie B!

Just like Chuck would never have been quite as magical as it was without the random joys of its minor characters (Jeff, Lester, and Big Mike stand out ... with shoutouts to Fernando, Chip, and all the Buymore extras), an NBA team needs its random moments of silly joy. 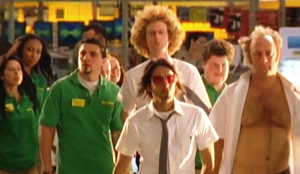 My favorite little thing from last season was Joe Ingles and his passing. He pulled of an AST% of 16.8 with a usage of 12.9%. While it's not unheard of for a player to have an assist rate that high with a usage that low, it is the first time in Jazz history that it has happened (according to Basketball-Reference). And during the season I kept wondering how he could set up shots for others so well when he was so little a threat to score himself.

I kinda have a thing for Dirty Joe.

What was your favorite random thing about the last season?

ESPN has been putting up a bunch of "This day in [team name] history" articles. The Jazz page is filled with stuff like "Karl Malone set a Jazz record for points in a quarter during the playoffs" and "John Stockton earns his 8th assist title". Fun little memories.

Well, this one killed me:

So this is the best bit of nostalgia they could find for Wolves fans, I suppose.

No matter how bad things get, they could always be worse.