Since Summer league is quickly playing out with the last game this afternoon, I thought I'd give everyone a snapshot of how players have performed. To do this, I brought back my "bin" charts.

For those who don't know, a bin chart shows a player's stat distribution over a period of time. In this case, the stats selected for the "bin" charting were estimated PER and estimated GO Rating for each game a player participated in.

Estimated PER attempts to approximate PER, a measure created by John Hollinger to compute a player's per minute efficiency while adjusting for game pace. The average player PER rating is 15.

GO Rating is Amar's proprietary measure. This summer, I came across the original version that Amar released online; however, since it is Amar's formula and he has not disclosed it to SLCDunk, I will not disclose where the formula can be found nor what comprises the secret sauce of the formula. However, I will say that I made copies of the formula and in the event of my untimely death, a copy will be released online and published in a local newspaper.

Go Rating (aka Gestalt Offense Rating) attempts to isolate how much pressure certain players could place on a defense. It works best with a large amount of data (i.e. a season) because the computation can break with smaller amounts of data. For this reason, I tweaked the formula a bit to allow the computation to be done for a single game. For reference, Amar has indicated that Magic Johnson's GO rating is about 102, Michael Jordon's is approximately 120, and Karl Malone's is around 83.

Here's a link to the interactive chart on Tableau (since the one below has a video arrow in the middle of it.)

Also, in my summer web surfing, I came across a picture of Moni. From what I understand, a picture of Moni is rare, so with that knowledge, here's the picture that I found circa August 2008- 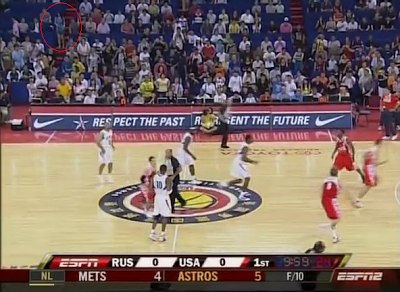 There's quite a bit you can garner from this picture. For instance, Moni has dark hair, her favorite color is blue, she's about as tall as the tip of my thumb, she has a friend named Tom, and she most-likely attended Georgetown University. Okay, maybe not so much, but now you have an image to place with Moni's name.

Thanks for reading. You may now go back to whatever it is you plan to do between the end of summer league basketball and the start of preseason basketball.