Today's installment features the best Australian who will suit up for our team this season! That's right, Sloppy Joe!

Trevor Booker came in at this spot last year, in hindsight I probably underrated him due to him being an import rather than one of our players who's developed in our system. But he assumed the role of backup Power Forward quite well, at least enough to justify Coach Snyder from giving former fan favorite Jeremy Evans any meaningful playing time.

In fact, Booker performed right on the border of one of our top 5 players last year, but we'll talk more about that once we arrive at his post later on in this series. Time for this year's #9! 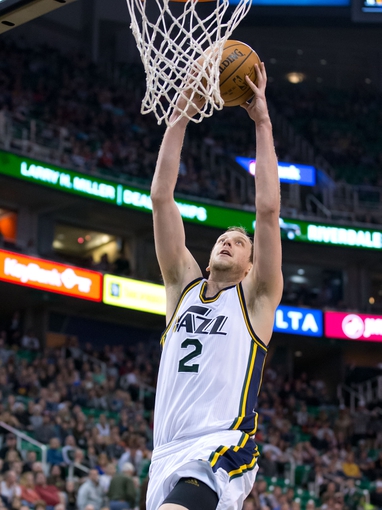 After his career there, Joe tried his luck at the NBA draft but went undrafted. He would play on Golden State's summer league roster, but without having enough of a standout skill to stick out, he tried his luck in Europe.

He went on to play in Spain for a few years before making his final pre-NBA stop on Israel's Maccabi Tel Aviv team. A team that would go on to dominate the 2014 season under the leadership of none other than current Cavs coach David Blatt.

On that championship winning team, Joe assumed a pretty similar role to the one we saw on the Jazz last season: a low usage player who excelled at system-centric basketball without an impressive box score. He'd focus on shooting the occasional three pointer when needed and making sure he could limit the other team's wing on the other end.

He finally bounced his way back into the NBA for the Clippers preseason squad last season before he was their last cut to get down to 15 players prior to the regular season. Apparently, the Clippers tried to sneak Ingles through waivers, but the Jazz called their bluff and made the sneaky snag.

You all know the rest! He went from being the unexpected Average Joe who got a lot of playing time due to the atrocious injury hex that plagued our shooting guards last season (Burks, Hood, Christopher) and eventually became our regular starter.

Ingles ended up playing the 6th most minutes on our team last season, not bad for a waiver wire pick up!

He did appear to assume the role of Jazzman who plays a lot without doing much on the court, but to label his entire season production under this bucket is a bit of an undersell. He shot 35.6% from 3 point land last year, a couple of our three point specialists last year in Hayward and Hood both shot 36% last year from distance. Ingles is a useful perimeter option on a team that could use it, the Jazz were in the bottom half in the league in both 3-point attempts and 3-point %.

Ingles was also a sneaky good defender last year, with only Elijah Millsap being the only rotation player with a higher steal percentage on our team than him.

Joe Ingles future role with this team does appear a bit murky. He has great chemistry with our teammates as evidenced by his awesome twitter game. However, camaraderie can only get a wing player so far that is frankly no higher than 4th in the wing player pecking order this season (Burks/Hood/Hayward).

Assuming that the shooting guard injury hex lets up just a little bit this season, Ingles playing time is unlikely to be at the same level that it was last season (21.2 MPG). Honestly I'd put the odds at 50/50 of Ingles even making the 8-9 man rotation as we get to the more crucial parts of the season if the Jazz are still in the playoff hunt. With that said, here are my projections for Ingles playing time and stats this season:

At this point, Ingles is likely to get the majority of his playing time backing up Gordon Hayward.

Once again, do not expect any jaw-dropping stats from the lovable Aussie, on the flip side of the coin, don't count Ingles out from being on the floor in key moments (especially early on in the season) as he was the master inbounder for multiple gamewinners last year.

Joe could win out his role as incumbent and have his minute average in the teens this season, but that's about his likely ceiling of a role on this team unless his talent makes an unexpected jump.

He is signed through 2016-17 on the cheap, so keep an eye on him being a possible trade chip over the next 2 seasons.