The Shums had to work late last night, so you're stuck with me this morning. (Also, I'm pretty sure "work late" means play a new video game).

Certainly you all know that yesterday was Media Day around the league. There were some old, familiar faces:

When you over compensate to make your friends think you got the joke pic.twitter.com/E4jW4LOuD8

And some new ones 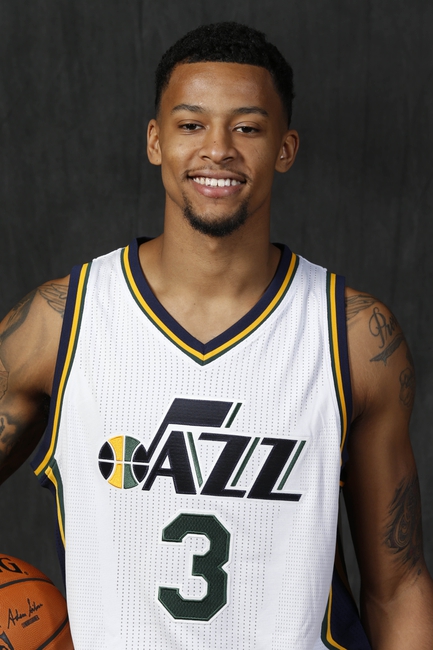 But it was great to see all the guys back.

You can see them clowning around, taking the photo, in the background of this video (about 40 seconds in).

This team, more than any in the recent past, is a pleasure to root for.

I joked in the picture above, but Trey easily had the biggest offseason body transformation (that sounds weird. Like a weight loss infomercial or a sci-fi movie). In his interview, Dennis Lindsey stated that P3 voted Trey as the offseason MVP. The gist of it is that Trey increased his athleticism and became a "safer" player.

The other thing that stuck out in the interview with DL was what he had to say about Tibor. He compared him favorably to Rudy, in that they're both tall, long, and have that drive and work ethic that makes them great players.

He goes into further depth about the transition for Tibor and Raul, as well as being very straightforward about the strengths and weaknesses of this team. The transparency is refreshing.

I linked to Jingles' interview above. He was a close second to Trey in body change. He looks much slimmer. He commented that he has basically been playing basketball nonstop for 7 years, because of his work with the Boomers. He took this summer off and was able to improve his diet, recover his nagging injuries, and really shed weight.

From Joe's interview (via the inimitable Moni):

So, I got to spend, I think, it was three or four months living at home, s–living with my now-wife, and had a very good diet that she was cooking, and a regular training routine that I never really got to be in for that period of time. And I think for me, the biggest thing was having that routine. So, now that I’ve got it, I know what to do and I’ll stay where I’m at.

He was also forthright about his season, last year. He talked candidly about the difficulty in adjusting to the NBA game, his new teammates, and a new country. It was interesting to hear, as it always is to get incite into the life of these guys; you find out they are, indeed real people.  Not that it will stop people from being horrible to them on social media.

The other thing that stuck out was how genuinely happy he is to be back. It's easy to see why he is a fan favorite.

The final big change has to be Derrick's chompers. My they are bright, white, and beautiful. I can understand

Just look at those beauties! He was a little self conscious about it when Locke asked him, but you do you Derrick. He handled it well, saying he wants to be the best him.

As DL put it, Derrick is "literally touched by the hand of god, with his physical dimensions". Which is an amazing comment, and subsequently what my wife says about my body every day.