One of the bright spots for Rodney Hood is his ball handling to set up a mid-range jump shot. The lefty can go right or left and hit the mid-range jump shot at an above average clip. When Rodney gets a screen at the angle three point line, or at the elbow, he has the ability to transition his way to the basket, oft times freezing the defender allowing him to hit that shot. There might be a possibility to set up other players and assist on a shot for them.

Rodney's assists percentage at 15.2%. (For comparison, so far this season: Thompson 10.9%, Hayward 15.5% (Averaged 22.9% the past two seasons), Kobe 20.5%, Rondo 47.5%) If Hood could get the ball to some open jump shooters, the paint might open up more allowing him to shoot a higher percentage. Part of the reason he doesn't have a higher assist percentage is because he might not be looking to pass to all his options, or his team mates aren't in optimal position. Hood has reduced his long 2s by 5 percent this year, and has elected to shoot 10-16 foot jumpers instead but he has dropped 6% in field goal percentage from last year to this at that range. Yet, he has had a 6% increase in his 3-10 Ft jump shots. His three point percentage so far has dipped 7% (but his shot looks so silky smooth!).

Some graphs to show where and how often Hood takes a shot: 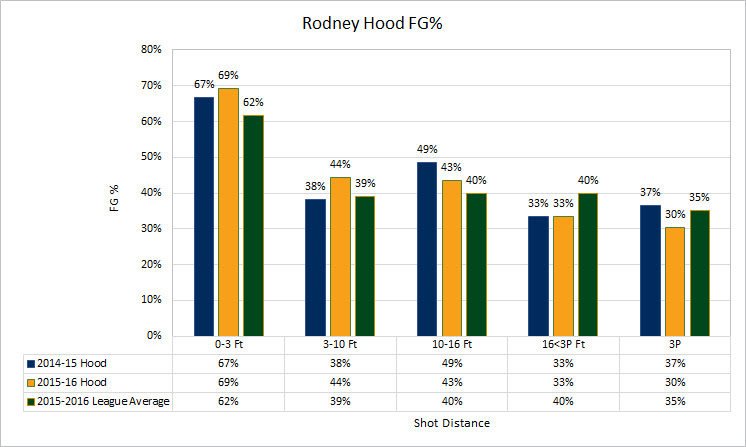 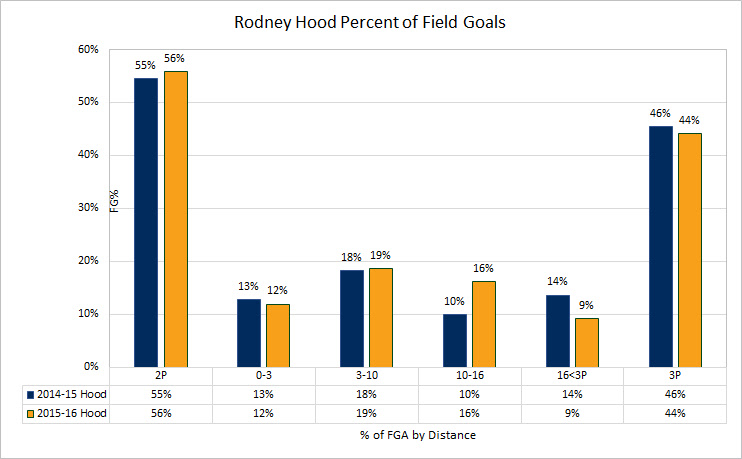 The following gif is from the December 31, 2015 game against the Trail Blazers:

Withey sets a decent screen allowing Hood to get Crabbe on his hip, as he makes his way to the basket he is able to pull up for a nice, but contested, shot.

There are many reasons players do what they do, but here is one interpretation.

A couple of notes on player movements:

Withey does a great job keeping space with Hood, if Hood needed to he could have elected to bounce pass to Whitey.

Neto is initially in position to shoot the corner three, but rotates up when Lyles comes across the on the short baseline.

Lyles cuts across the key bringing his man towards the rim and the play.

Lyles should fade to the left corner three leaving one less defensive body in the paint. Notice the four Trail Blazers in the paint when Hood releases the ball. This should allow Hood to potentially get Lyles a corner three attempt. Neto also would not need to rotate up because Lyles is encroaching on his space.

Hayward's man turns his head off of him while Hood drives to the basket. Hayward could follow the play a couple steps towards the baseline allowing Hood to pass him the ball for the open three. (Although Hayward could have had the assignment to rotate to the vacant position to get back on defense.)

By the time the ball leaves Hood's hand there is not one player on the left hand third of the court. The spacing is cramped and options are limited. The Jazz could work on spacing more, at least on being in the position to take a good look at a jump shot. The Jazz did shoot lights out this game, yet just the night before we saw them shoot as cold as we have ever seen. Perhaps more emphasis on spacing and being in position could help with some more good look opportunities for quality jump shots (making them is another matter).

Here is an example of something similar to the suggestions:

All in all, this Jazz team is improving amid all the injuries, credit to Quin Snyder, his assistants, and the players individually.

Also, all apologies (love Grohl's turtleneck) if the gifs are not working well.

How satisfied are you with the execution of the Utah Jazz's offense so far this season?