New Orleans Pelicans star Anthony Davis will not play for Team USA this summer, does this open a door for Utah Jazz bigman Derrick Favors?

Share All sharing options for: New Orleans Pelicans star Anthony Davis will not play for Team USA this summer, does this open a door for Utah Jazz bigman Derrick Favors?

The New Orleans Pelicans have shut down bigman Anthony Davis for the rest of the season. He will have off-season surgery which will, obviously, prevent him from playing with Team USA in the 2016 Rio Olympics. ESPN elaborates:

Davis will undergo surgery to fix a torn labrum in his left shoulder that he says should keep him on the shelf for four to five months and out of the 2016 Rio Olympics.

But the 23-year-old All-Star said he's been fighting through the injury since his rookie season.

"They told me [the shoulder surgery] eventually has to happen," Davis said Monday. "Gradually it's been getting worse. Something we just got to take care of now."

Davis said he has worn a special compression shirt underneath his jersey in order to "help stabilize" his shoulder.

"It was bothering him here and there, but it was never to the point where -- he didn't sit any game out because of the shoulder," Pelicans coach Alvin Gentry said. "He was able to play through that situation. I think the situation right now is that this is a perfect time. He has a knee issue, so if you're gonna take care of the knee issue, you might as well take care of the shoulder one, too. That's where that is."

Davis will also have a procedure done to repair a left knee injury that he says has been bothering him since before he was removed from the second half of Friday's loss to the Portland Trail Blazers.

"It's been hurting for a while, but [the knee injury is] something that I can play through," Davis said. "It ended up being tendinosis, but we'll just try to figure it out."

Davis said he will get it further examined in Los Angeles "to figure out what's really going on."

"I think the biggest thing was because of the knee," Davis said of the shoulder injury. "Me and the organization came to a conversation and try to figure out what's the best situation. Since the knee is what really has to get really looked at, might as well do the shoulder as well, instead of waiting and then something happening to the shoulder, and now you have to do it all over and just wasting time.

"Might as well knock both out at the same time."

Davis said that he's not looking forward to being away from basketball, but he appeared to get particularly emotional when admitting that he won't get to play in the Rio Olympics.

Davis won a gold medal with Team USA as a 19-year-old before he ever played a minute in the NBA. He also won gold at the 2014 FIBA World Cup.

"That's tough. It's definitely tough," he said. "Twenty-three years old. ... A couple more Olympics, maybe? But it's definitely a tough situation. I love USA Basketball, love when I was there in 2012, love when I played in the World Cup in 2014.

This is a big deal. Such a big deal that Mitch Lawrence of FORBES had to write about it:

"'It's unfortunate," said Pelicans coach Alvin Gentry, "but he's been playing with shoulder problems the whole season and it's amazing when people say he's soft and they don't understand that he's played through a situation with his shoulder the entire season."

In finally addressing the long-running shoulder injury, Davis admitted he always wears a T-shirt under his jersey to help stabilize the damaged shoulder. But he never let on that he was playing with a serious injury. If anything, that should tell people just how tough he is.

Talk about having a losing season â Davis couldn't get the Pels to the playoffs and now also stands to lose $23 million! His contract stipulates that he would have received $145 million in a five-year extension that he signed last July. But to get the $23 million, he needed to be either voted in as a starter to the 2016 All-Star Game; or be named the NBA's MVP for 2016; or make either the All-NBA first, second or third team. He missed on the first one, has no shot to get the MVP (that's Steph Curry's award and it should be the first unanimous selection in NBA history) and is likely to go 0-for-3 after making the All-NBA first-team last season. He's now guaranteed to miss 21 games this season, probably killing his All-NBA chances. So his extension will now be reduced to $122 million.

By getting two surgeries in the coming days, Davis will not be able to compete in the Summer Olympics in Brazil this summer. He was a lock to get a roster spot, since he's emerged as a top NBA player in his short time in the league. Last season, when he led the Pels to the playoffs, he finished fifth in the MVP balloting. This season, with Gentry coming in from Golden State to revamp the offense and play more to Davis' strengths, it's been nothing short of a disaster as the Pelicans were expected to build on last season's eighth-place finish in the West.

Now his season is over after he put up big numbers (24 points, 10 rebounds, two blocks) but couldn't prevent his team from finishing in the lottery. Although Davis wanted to play with LeBron James and the league's other players in the Olympics, he admitted, "I think everyone understands health is more important.''

First of all, I agree. Health is the most important thing -- which is probably why the Utah Jazz are being so cautious with Dante Exum and Alec Burks -- both who HAD surgeries and have yet to return to NBA game action. But secondly, as an opportunist, the question in my mind is does this finally open a door for Derrick Favors to be considered? It seems like ages ago (2012 in reality) since Favors was *last* in the Team USA pipeline. When USA Basketball announced their 30th "finalists" for the 2016 Olympic team Favors was nowhere to be found. It wasn't a complete surprise, but still a bad decision. Even bigmen for international national teams were tweeting about it as an omission.

You figure that LeBron and Kevin are locks as wings. Perhaps Carmelo as well. But on a 12 man roster with this current theory about playing wings as power forwards, at MOST you are going to see five full-time bigmen -- but more likely four. I think that Derrick Favors is better than many of the remaining players.

Even if you whittle it down to non-versatile, just "big" bigmen the list of DeMarcus, Dwight, Andre, and DeAndre isn't completely superior to Derrick. But that's my opinion. What's not opinion is just how good Favors is, and even in head-to-head against Anthony he shows his mettle. In the 11 games they have played against one another the per game stats are quite close. 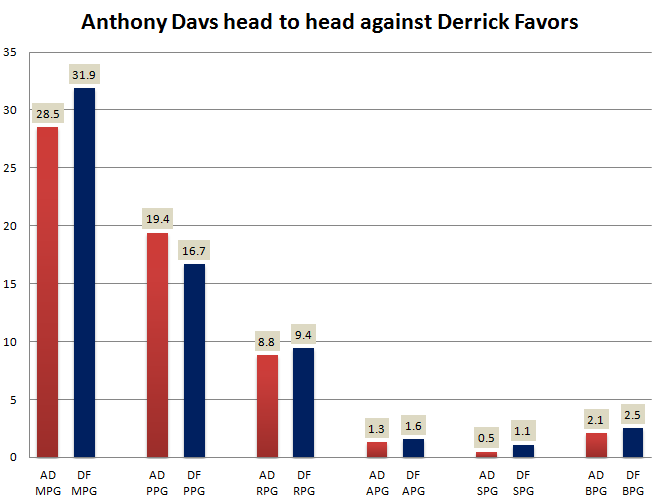 It's more than likely that Team USA will just roll with a pool of 29 players now to make a team from, instead of adding a 30th. I think Favors deserves a shot. Team USA has consistently indicated that they think differently. #LetDerrickPlay !