Tibor Pleiss, J.J. O'Brien, and the last season for the Idaho Stampede

Share All sharing options for: Tibor Pleiss, J.J. O'Brien, and the last season for the Idaho Stampede

The Idaho Stampede concluded their final season, and if we are being nice, we could say nice things about them. I did not always say nice things about the Stampede, and had the long held belief that they existed as simply "development theater" (like security theater at airports) and were intended to not make deep roots in Idaho in preparation for a move to Utah. Let's look back at how we got here. About a year ago the Utah Jazz announced that they bought the Stampede, and that Dennis Lindsey wants to "show the Boise market that we can be good partners;" however, Randy Rigby suggested that they have a "one year window to look at things long-term." I felt like this meant they were moving. With the first pick of the draft they selected 28 year old Jeff Ayres and I started to seriously wonder what the real agenda was with them -- or if they would even surpass last seasons' 9-41 record. In December it was clear that their best player was Tyus Jones, you know, a rookie for the Minnesota Timberwolves. I don't know what the words "exclusive affiliate" means to you, but having NBA rookies on your DL team that aren't on contract with your NBA team seems like a stretch. Later on in the season they would trade #1 draft pick Ayres to a playoff team for a future 1st -- a pick that is destined to not be a #1 overall draft pick.

But hey, they aren't trying to skip out of town or whatever. They did manage to go on from that 4 win start to win another 16 and finish the season 20-30. That's 11 games better than the season before, success! As we can see, they did draw in a little over 2,000 butts in the seats last time I checked. That could be good. I don't know. But still it got better over time too! 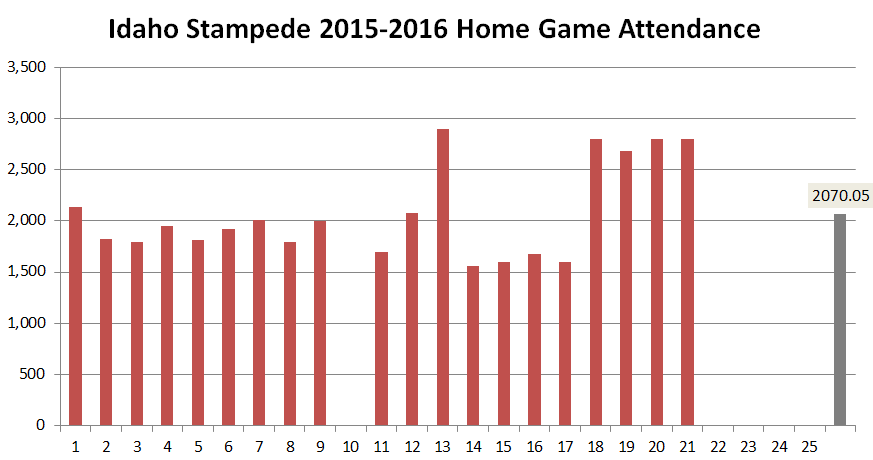 Overall the Stampede did still finish as one of the worst teams in the league, and made a number of head scratching moves. But they had two things us Utah Jazz fans were happy about. They knew what they were about, and gave minutes to rookie Tibor Pleiss (of the Utah Jazz) and J.J. O'Brien (of the Utah Jazz summer league team and 10-Day Contract winner). J.J. is on the path to being a "three and d" player. And Tibor is doing his best to make us all forget about Ante Tomic.

While the team sucked, they did not. J.J. (dude's first name is Jaleel, why don't we call him that?) averaged 14 ppg, 5 rpg, 3 apg, and 2 spg. He played defense and took some threes. Tibor averaged a double double with 12 ppg and 10 rpg. He made nearly 90% of his free throws, shot over 30% from the outside, and still found time to average 1 apg and 1 bpg doing it. Both guys averaged over 30+ mpg in starting roles. While Tibor was called up and sent down all season long he will finish 2015-2016 with the Utah Jazz. And I think you can say that it was a successful season for both.

But how did these guys do outside of the vacuum of this season? There have been a number of previous Jazzmen who played for the Jazz in the same season they played for the Utah Jazz affiliate in the NBADL. (Yes, this discounts Sundiata Gaines, Othyus Jeffers, Bryce Cotton, and Erick Green to name a few.) Out of the wing players we've previously seen we have Morris Almond, Kevin Murphy, C.J. Miles, Toure' Murry, and the indefeasible Ian Clark. Out of the bigmen we have Rudy Gobert, Kosta Koufos, Jack Cooley, Jerrelle Benimon, Jeremy Evans, Jeff Ayres (for fun), and Kyrylo Fesenko.

So let's look at what the data says:

First of all, no one comes close to setting the opponents on fire like Mobe. It's not even close, even Murph (who did a good job in his THREE seasons in our teams) pales in comparison. Wing against Wing, we see that J.J. shot the best due to his role and limited shot selection. In a way you see that he is being groomed to actually be a role player, instead of being groomed to be a guy eternally frustrated with a limited role on a good team. The bad news is that he really didn't connect from deep. He shot better that Toure', but his higher FG% and lower 3PT% shows that he scores more in transition than from spotting up. Of course, let's point out the greatness of Ian Clark here. His game is meaningless to Tyrone Corbin . . . but Ty's not our coach anymore. If we are looking at a "three and D" guy then J.J. isn't a "three" just yet. He's also clearly not the type of explosive scorer that Almond, Murphy, or Miles were.

As for the bigs, well, the Utah Jazz really have a tight center rotation with Rudy Gobert and then Derrick Favors filling in as the back-up. Whatever's left goes to inside scoring, rebounding, rim protector Jeff Withey. What's left for Tibor? You want to be competitive in "center skills" like rebounding and blocks, but Pleiss is a finesse guy. You want to see something different from him. And compared to the rest of the Jazz bigs he really is.

He wasn't much of a screr, and was still somewhat efficient even if he wasn't outstanding. He did stand outside the paint though and could knock down shots, including shooting 30+% from outside on 0.68 threes taken a game. He wasn't a banger, and rarely got to the line -- but he made the most of his time at the stripe. No, he didn't shoot over 70% from the field like Rudy did. But he did things no one else could do. (Except for perhaps 28 year old Clippers prospect Ayres.)

Moving to the full picture, not just scoring, we see a slightly different picture. O'Brien actually AVERAGED more mpg than Almond, and has played a lot of minutes in his one season (the guys ahead of him in total minutes played more than one season). Unfortunately, he didn't really do a lot of different things. What he did do was make his efforts worth it in two things -- rebounding and steals. His levels were only behind Toure', and we may feel like his high value in these stats could be partly due to O'Brien playing more than 36 mpg. I'm not going to discount his work on the glass though. He wasn't a great passer, but he did do something we love to see -- he didn't foul a lot. As a result, he could play long minutes as a possible three and d guy. I don't know how he gets minutes at the wing behind Gordon Hayward, Rodney Hood, Alec Burks, Dante Exum (he's gotta slide over at times), and Joe Ingles. But I'd be happy right now to see him ahead of Chris Johnson.

For the bigmen we see that while Tibor did average a double double, he didn't do much else. Heck, Jeremy Evans averaged 3.5 apg and 3.5 bpg in his brief time as a D-League anomaly. Tibor is the what you see if what you get guy. A 7'3 European finesse bigman who can shot, and use his length to work the glass. Also I think we under-recognize Fesenko's passing ability. He's no Vlade or Sabonis, but you'd want to see Tibor at least have better passing numbers than Fes, right? Especially if he is a finesse center?

The elephant in the room here is Jerelle Benimon and Jack Cooley. They get the minutes and the stats in the D-League. They just can't be fixtures in the NBA. Benimon is 6'8, and Cooley is 6'9. Gobert and Pleiss are 6 inches taller than them respectively.

When you look at the advanced stats we see that the usual suspects pop up where we expect. Rudy was dominant on the glass and in blocking shots. Morris was a huge part of the offense, but didn't pass much. C.J. did work in the D-League as a teen. And Jeremy defies analysis.

J.J. is kind of 'ho hum' here, but does pick up a number of defensive win shares and stays out of the way on offense. That's the role built for him in Utah with the Jazz if he makes it. Tibor is not impressive compared to some of the other bigmen who have played for the Jazz affiliates. He's not a short, strong paint player (like Cooley, Benimon, or Ayres). He's not an athlete (like Evans, or Gobert). He's not even somewhat average and awkward (like Koufos and Fesenko). He's his own guy out there. And it's going to be hard to evaluate him against his peers because you don't really see many 7'3 three point shooters out there.

He's not someone who has guard skills and just kept growing. He's a really tall guy who has to put in a lot of work still to be able to play against NBA level athletes every day. I applaud him getting legit minutes, a legit role, and a double double every night. Though I think O'Brien is more NBA ready right now. With the Jazz and their depth issues at the wing (this past year) it's clear that the org felt the same way.

N.B. Not all players have data for Offensive/Defensive +/- or VORP, so that was recorded but omitted from this data table. If you are curious I will say that it shows that J.J. is okay on defense, but a negative on offense, but overall better than average. Tibor is a more extreme version of that, really bad on offense overall (despite being offensive focused) and his size helps him be a big deal on defense.

As this was the swan song for Idaho, it was still a losing season. Moving. Changing the name to the SLCS, and getting new uniforms are nice. What's going to be nice would be to see both of these guys play another season in the d-league. I wouldn't mind another 9 to 20 win season from Coach Dean Coopers crew if at least ONE of his guys turned into an NBA player.

Utah may have two.

With the Stamps moving to Utah and calling themselves the Stars we hope for a new beginning of sorts. A team dedicated to development, one that is aligned with the Utah Jazz (instead of playing combo guard Toure' Murry at PF like he did during his time in Idaho), and one that is honestly not trying to fool the fans into supporting them. It's been baby steps each year. They completed their agenda of moving the team. They didn't build roots. And they didn't try to win. Utah fans have stronger hopes for this team than just to exist.

After all, you are the Stars now. That name has a value to it. Don't tarnish it.

Win at least 25 games next year, and keep training these guys to be NBA players. Who knows, one day the Jazz may even be able to make it through a season without calling someone up from a team other than their own affiliate? Wouldn't that be nice???