If you're like me, a casual gamer, you are usually dabbling in one game or another. A couple months ago I came across Clash Royale, a highly popular cell phone game. I played it here and there for the last few months and actually got pretty good. Last week I found out Gordon Hayward also plays Clash Royale when he tweeted out a video he was a part of with a well known Clash Royale player.

Check out my video with @ChiefPat! He's kinda good at clash royale. Yes we are recruiting... Clan "Everest" #L092CYL

Definitely watch the video. It's a fun insight into Gordon's personality. I thought it was funny how ChiefPat mentioned Gordon's contract and Gordon laughs about being too stubborn to pay for better characters in the game. (The game is free to play, but you can get better in-game characters by paying for them instead of slowly unlocking them.)

(Also, "the princess" referenced in the video is a character in the game...)

One of the first cool thing about the video is Gordon talks about playing with Rudy and them competing for higher ranking. I don't know why I like the idea of them playing together, maybe the comradery? I also like to think of this as Gordon's equivalent of Kobe Bryant always having to beat everyone on the team one on one. Rudy reacted to Gordon's clan post...

The other thing you realize watching the video is Gordon is GOOD at video games. He beat the guy he's playing handily on the first game. The funniest part of that video is hearing how frustrated Gordon was at having to talk to the guy while playing. He's so competitive and he wanted to stay focused, not mess around chatting.

Anyways, after watching the video I searched for Gordon's Clash Royale clan "Everest" and I saw that it was an open clan. To get in you needed a minimum trophy level of 1600 (In Clash Royale you get trophies as you win and you lose trophies as you lose. It's their player ranking system.) My trophy count was around 1550. At lunch I got on my phone and started to play my heart out. I as sweating as I played 4 or 5 games to get my ranking up. I won a couple would then lose one until I got to exactly 1600. I nearly jumped up and down when I went to Gordon's clan and there were 10 spots left. My hear sunk when it didn't let me in because I needed to be at at least 1601. I refreshed and saw that at this point there were only 5 spots!

My next game mattered, I HAD to win. It was my one chance, my first game after a D-League call up and I had to hit shots to get that guaranteed contract. I started to play and my focus was REAL. After a tough game, I was fist pumping with a nice win. I rushed through search to find "Everest" and there were three spots left. My 1620 ranking was enough and when I hit "Enter Clan" I was in!

And I tried to document everything.

Immediately I was in clan chat reading messages. And right there were messages from the clan leader, Gordon Hayward, who went by the gamer tag "GTime."

This was awesome. I was playing a video game with Gordon. I could chat with Gordon, I could play against him if I wanted to, It was cool.

The first thing I noticed was that Gordon is just a normal, nice guy. He chats with other players just like any other person. You wouldn't know he was an all star caliber NBA player from his messages... 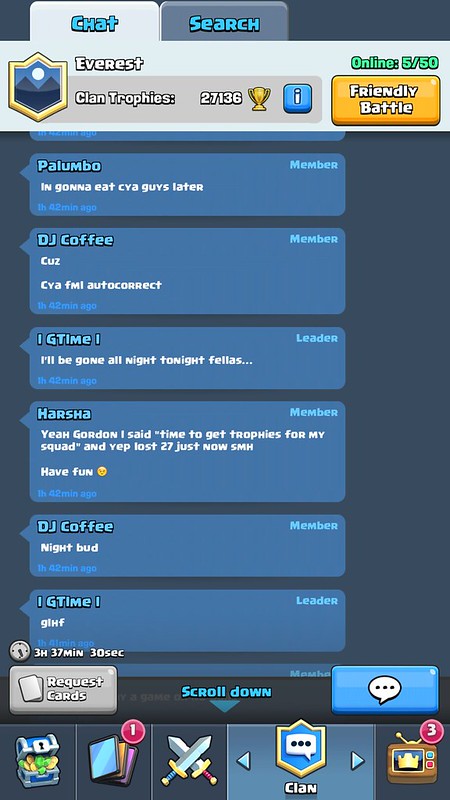 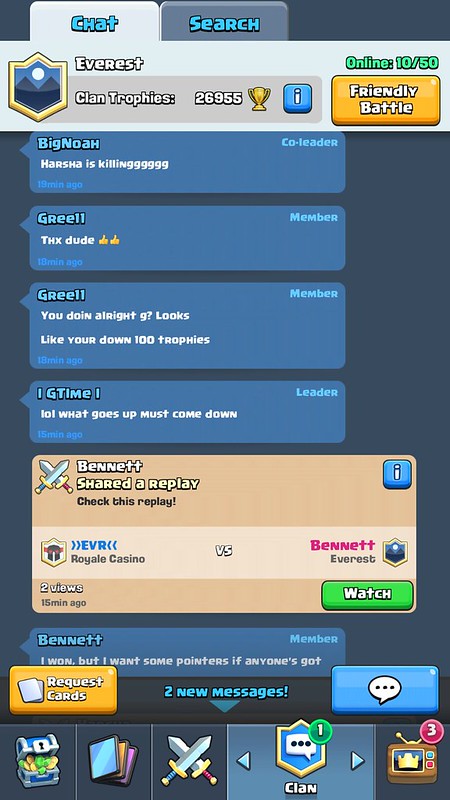 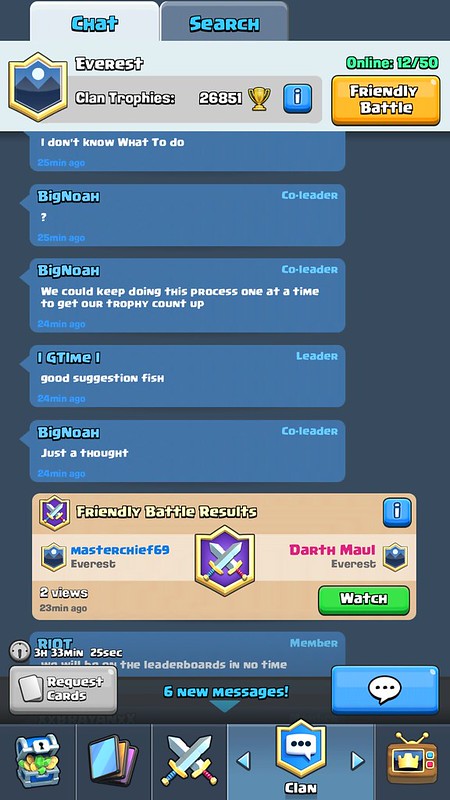 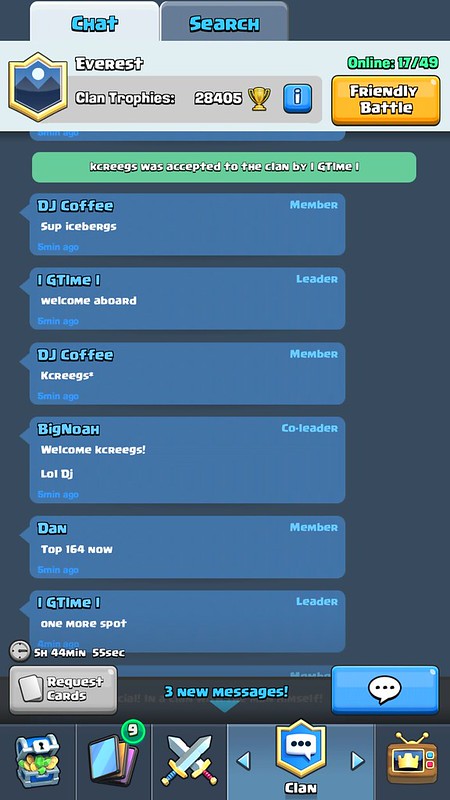 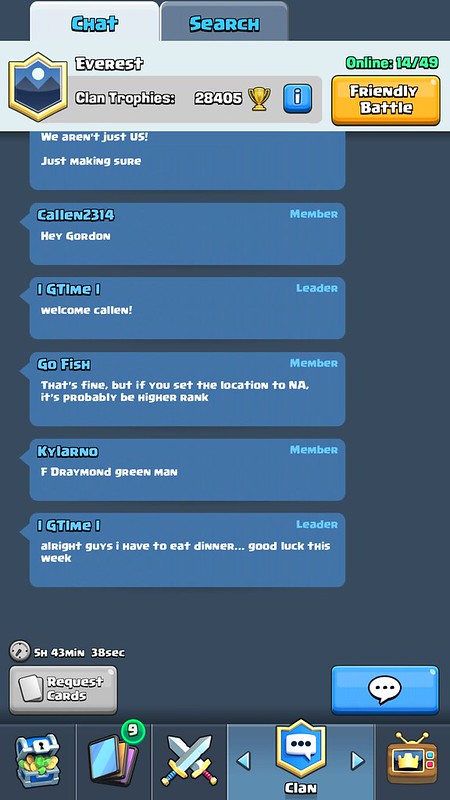 It was pretty awesome. But that was just the start, Gordon was pretty funny. There were two things that happened that made me literally LOL. The first was when Gordon talked about what happened when he played the game too long at home.... 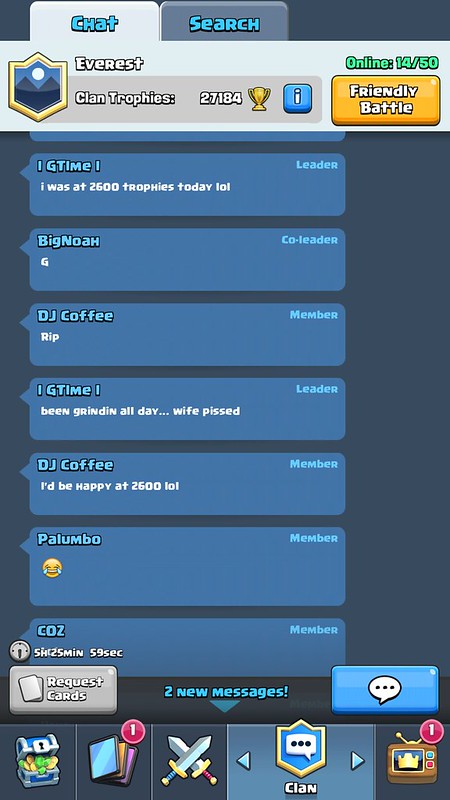 Then there was that time that one of the co-leaders of the clan made a reference to Duke and Butler and Gordon kicked him out of the clan. 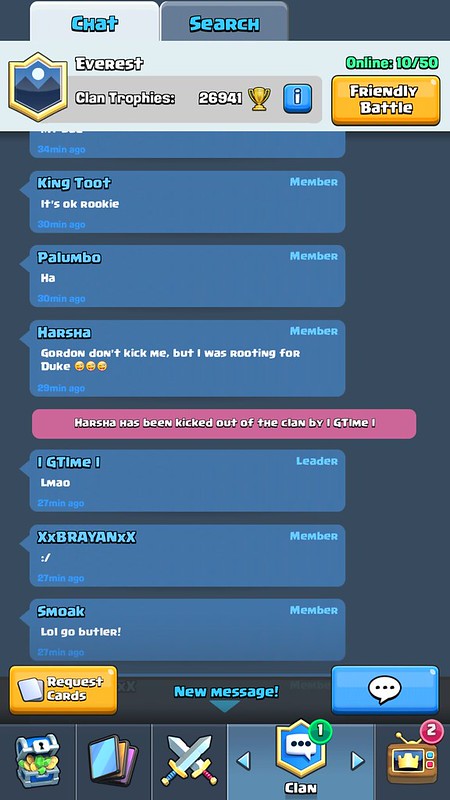 It honestly cracked me up, but don't worry, Gordon let him back in.

As I played the game and kept up with the clan, I realized how much of a competitor Gordon is. He didn't want to be anything but the best. He was constantly trying to get his personal record up and wanted to beat everybody. 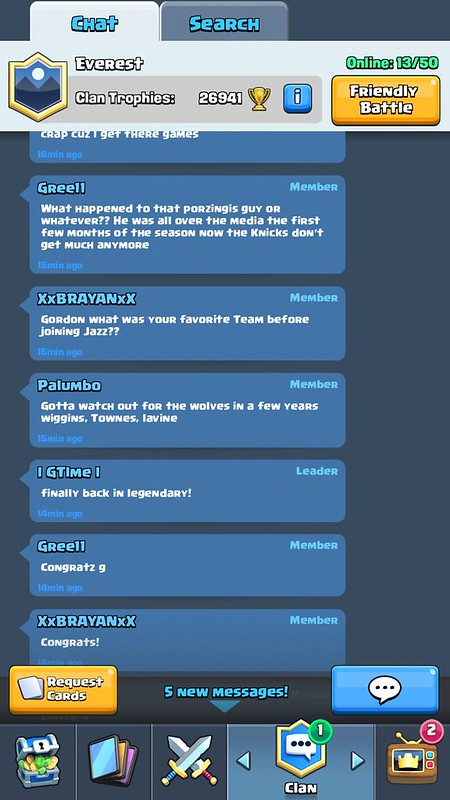 If you're not familiar, legendary is the highest level you can be at in the game. Gordon was consistently there.

Gordon also set up clear rules for the clan. He wanted to promote the top three players every Sunday to a higher ranking as a reward, and he also kicked the lowest three players every week on Sunday. The goal of this was to get the clan to the highest ranking. No doubt, Gordon's goal is to get clan Everest to be the #1 clan. 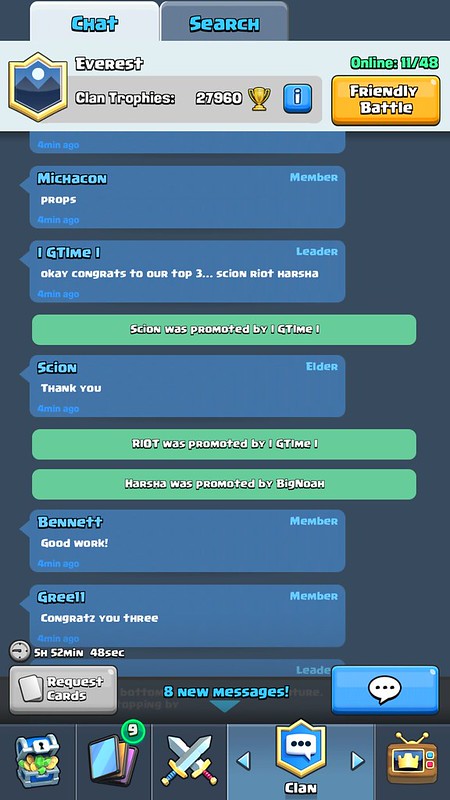 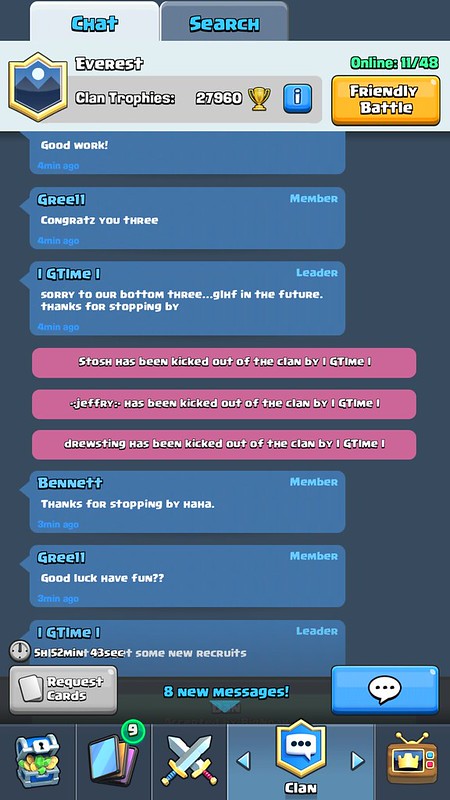 When I was in the clan, it was infectious how Gordon wanted to be better. He did the work, got results and it made me want to be better too. And his clear rule system was really motivating. No one wants to be kicked out of the clan by being in the bottom three. After joining Gordon's clan, I went up 400 trophies and hit my highest rank ever. The best part of it was when Gordon noticed and cheered me on, even though I was one of the lowest level players in the clan. 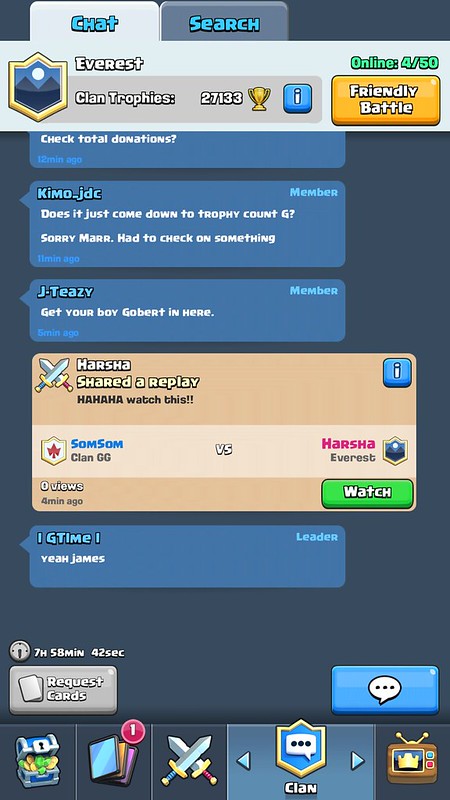 Honestly, this all taught me a lot about Gordon. I can imagine that other players in the Jazz locker room see the work that Gordon puts in to his game and I'm sure they feel that same desire to be better on the court, just like I did in this game. The rules he set for the clan made me think about the rules he is setting for himself this offseason and will no doubt help any of the players that go to work out with him. The proof is in his results. Gordon has gotten better every year, both physically and with his game. It's amazing to watch. Any player with that work ethic and competitiveness is only going to get better and better and it's why I think he deserves a max AND will play up to it.

All in all it was really fun, but just like most d-league players my ten day contract eventually ended with me not quite having the talent necessary. My rank dropped to the bottom of the clan. So, to not hold the clan back, I left a message for the clan and Gordon and signed off. 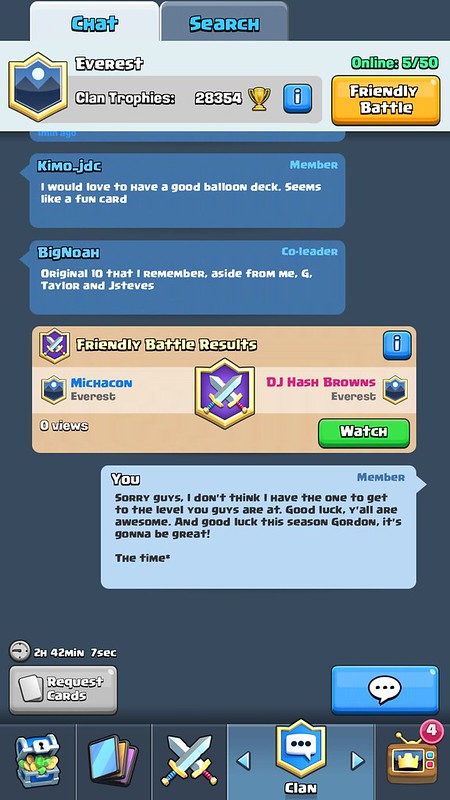 Best of all was this message Gordon left.... 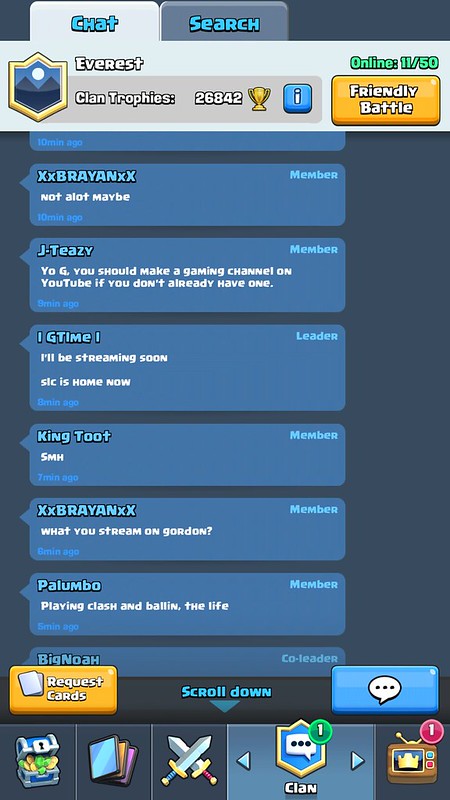