What is Game Score?

Previously I used "Game Score" as an all-around metric for evaluating a player's all-around game. I'd like to give this stat a little more background for better understanding. basketball-reference.com says about "Game Score":

Game Score was created by John Hollinger to give a rough measure of a players productivity for a single game. The scale is similar to that of points scored, (40 is an outstanding performance, 10 is an average performance, etc.).

This stat, as you will see, is imperfect, as pretty much any stat is. It takes each stat from the box score and tries to assign how many points that stat is worth to the team. Most of the formula was made by reasoning out how much a stat was worth or some sort of average. Here is the formula

The basic reasoning, so far as I have determined is:

As you see, it isn't perfect, but it does a good job of grabbing everything in the box score and putting it together. For a single game, all-around stat, it is about the best we have.

Using this stat, I wanted to evaluate what the rookie race is looking like. Who is the leader? Does Donovan Mitchell have a shot at winning the whole thing? Well, let's look at the histograms of the 4 competitors in this race: Donovan Mitchell, Jayson Tatum, Ben Simmons, and Kyle Kuzma. 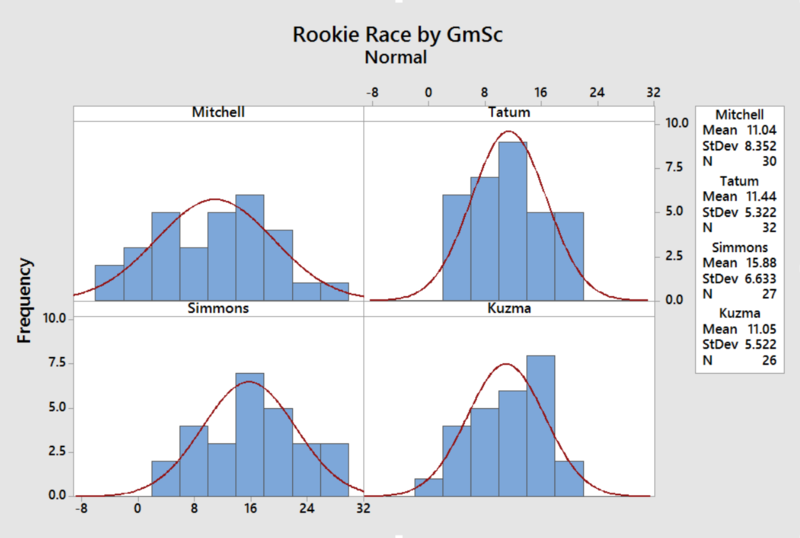 The first thing that should pop out to everyone is that Simmons has a significant lead on the other 3. You'll notice hte mean of his performance is almost a 16, where all the rest are at 11. It's clear that he would either have to slump or one of the other 3 go on a tear to beat him out for the lead.

Mitchell has the most variance in performance by far (standard deviation of 8 vs 5-6 for the other 3). This is partially a product of his poor start to the year, but not completely. He still has had a smattering of bad games even since he started killing it.

I think given the stats I would say the current status, from a statistical standpoint is 1) Simmons, 2-3) Tatum & Kuzma (tie), and 4) Mitchell.

The reason Kuzma and Tatum win out over Mitchell, in my book, is their better standard deviation. Having more consistent performance is much more valuable than an occasional good game followed by a complete stinker.

That said, if Mitchell continues his recent tear, he will easily pass both Tatum and Kuzma. Of the 3, I believe he has the best shot of challenging Simmons for the #1 spot as evidenced by him having the highest highs of the the group.