Welcome to Normal Basketball! What do I mean by normal basketball? For those familiar with statistics, I'm referring to the normal distribution which is used everywhere to characterize the nature of the variation of a process. In simpler terms, it is used to describe 1) what something usually is (mean) and 2) how much it changes from time to time (standard deviation).

As just mentioned a normal distribution (bell curve) has 2 parts: the mean and standard deviation. The mean, as we all learned in grade school, is the average of all data points. The standard deviation is a measure of how much the data varies or changes. 67% of all the data will be within +/- 1 standard deviation of the mean, 95% within 2, and 99% within 3 (i.e. most of the data is in the middle of the curve).

With that background, let's get get to the question we want to answer:

Is Donovan Mitchell improving through the season? If so, how much?

To answer this question, we are going to look up the stat "Game Score". You can find this stat on basketball-reference.com. For a general explanation, it was created to boil down a box score into a total value of a player during a game. Generally a "20-point performance" will earn you a 20 in game score. If you didn't score any points, but crashed the boards, stole the ball, and dimed everyone up then you will get a similar score.

For our first dive into this question, I'd like to show a process capability chart using the game score from the 23 games played so far. There's a lot of stuff on here, so let's dive in. 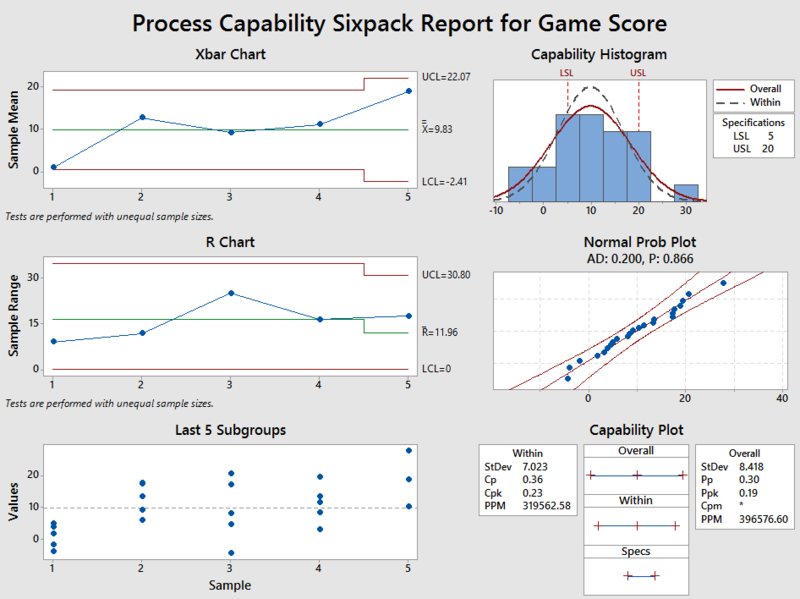 A process capability chart is used in manufacturing to determine if a process is stable and in-control. In this case, we want to see that the process is not stable. Instead, we want it to be trending towards the higher end. In the histogram, you'll see 2 reference points. One is the lower spec limit set at 5. I set this since 5 is kind of a "meh" game. The upper spec limit is 20 since this is an "awesome game". Currently, Mitchell has more "meh" games than "awesome" games, though he has a large number that are between the 2. This is great for a rookie.

The XBar chart plots what the mean is over each 5 data points. This goes toward answering our question. The mean is near the LSL for the first 5 games and is steadily trending towards the USL for the last 3.

I'll let you look through the other charts in the 6-pack if you'd like to glean more info, but we won't dwell further.

Now that we saw the XBar chart indicating he might be improving, let's get more definitive data. If he is improving, then we would expect the mean of his performance to be shifting to a higher value. Below I have created a histogram to visualize this. The left histogram is the first 11 games. The right is the next 12. 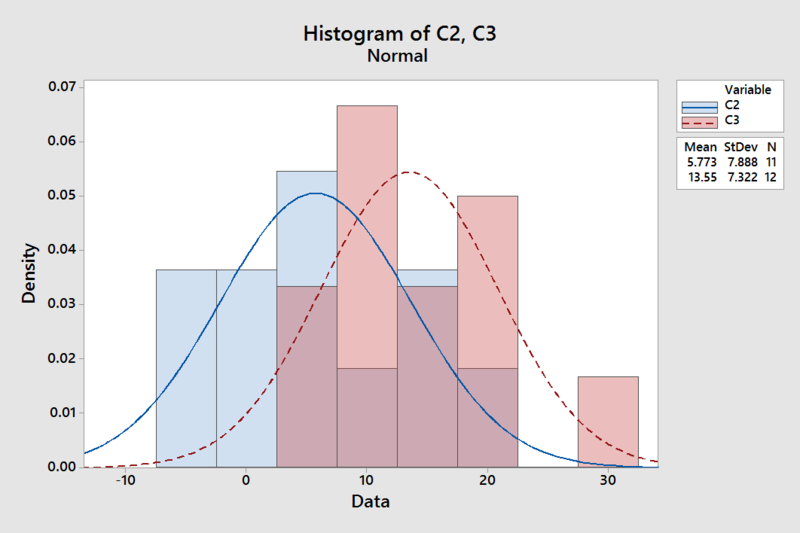 You'll see that there is a lot of over-lap between the 2 distributions. You'll also see that the normal curve is not well formed in this histogram--honestly they look more like blobs than bell curves. This is to be expected since the sample size is only n=11 and m=12. Visually, we can't say that the difference in means (i.e. Mitchell improving) is anything more than noise. To answer this, we will need to perform a 1-way ANOVA test.

For those unfamiliar, ANOVA means ANalysis Of VAriance. If at the end of the ANOVA test you get an answer of P <= 0.05 then the answer is yes, the mean shift is real. If you want a better explanation of that, I suggest you go to wikipedia, otherwise, just trust me on this one.

And look at that! What do you know but P=0.023 which indicates that we are confident that the mean shift (i.e. Donovan Mitchell's improvement) is real!

Now that all of that's stats geekiness is over, what does this mean? It means that our rookie is really improving his performance in terms of game score. In the first 11 games he was averaging a game score of 5.77 i.e. "meh". In the next 12 he was averaging 13.55 i.e. high level starter. This data indicates that as a rookie he has already moved his floor as a player to a high level starter! That's crazy! Most rookies end their first year averaging replacement player levels--closer to 0 then they are to even the "meh" level of 5!

Now, knowing that Mitchell's floor has reached "high level starter", how much more does he have to improve to reach the 20-point star level? If this trend continues, it won't take much more.