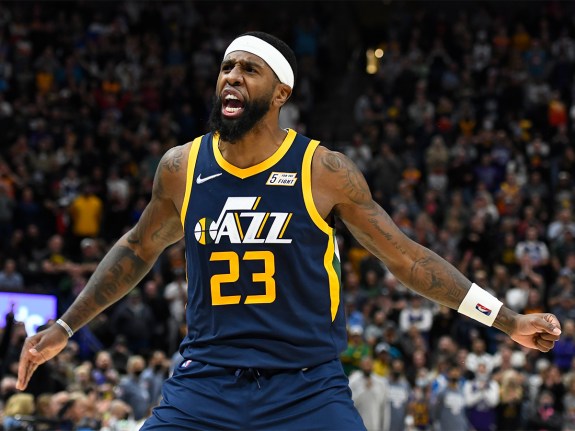 Royce O’Neale of the Utah Jazz is enjoying a midcareer renaissance.

When Quin Snyder was hired to coach the Utah Jazz prior to the 2014-15 season as part of the franchise’s first real "rebuild" in decades, he came with a clear mandate for player development. Seven-plus years in, his track record here is getting hard to ignore.

While a young star like Donovan Mitchell often draws the flashier headlines, Snyder and his staff’s success with less traditional forms of development really tell the story. Through what’s often a years-long process of layering distinct skills atop a foundation of competency, Snyder and his staff have developed a clear penchant for striking gold in players who would typically be considered well past their prime development years.

Consider Joe Ingles, a former scrap-heap pickup claimed by the Jazz off waivers during Snyder’s first season in Utah. Playing his first NBA game for the Jazz at age 27, Ingles seemed like little more than a serviceable spot-up shooter who would play a limited bench role. But Snyder saw the outlines of a pick-and-roll maestro laying dormant — and over the course of a three-year period, he tripled Ingles’s time of possession while transforming him into a premiere role player who fell just shy of last season’s Sixth Man of the Year award.

The winner of said award? Jordan Clarkson, another Snyder midcareer success story. Always a microwave scorer with some natural deficiencies due to size and defensive profile, Clarkson was struggling to translate his skill set into consistent NBA impact; Snyder and staff refocused his shot selection and integrated him into one of the league’s best defensive systems.

The list goes on. Georges Niang barely played in his first two NBA seasons with Indiana and Utah, but he grew into a strong reserve role with the Jazz after his 25th birthday and work with Snyder’s staff on his body and defensive acumen.

Many of these unusually timed leaps can be seen in data:

Niang, now in the midst of a major breakout season off the bench with the Philadelphia 76ers, credits Snyder for seeing something in him early on.

"Quin did such a good job of connecting with me and helping me realize my potential, and what I could do to help myself get on the court and maximize that — while also helping the team win," Niang told FiveThirtyEight. "He would walk around the gym thinking of ways to make you personally better, and then go show you himself what he was talking about.

"The most important thing was the connection that built — it was coming from him and no one else, and he was willing to sacrifice his time to teach you."

As a new season rounds into form, a new candidate has emerged as Snyder’s latest success: swingman Royce O’Neale.

Through Sunday’s games, O’Neale ranked 16th1 in the league in FiveThirtyEight’s RAPTOR WAR metric, posting career highs on both the offensive and defensive side to this point.

Defensively, Snyder continues to deploy O’Neale as one of the league’s most versatile Swiss Army knives, assigning him to opponents’ top options at virtually every position. He’s in the 93rd percentile for percentage of time defending "Usage Tier 1" players, via data from The BBall Index, and in the 98th percentile for "Matchup Difficulty." He’s received "A" grades for every area of perimeter defense from BBI for each of the last several seasons.

"Last year, I feel like I should have been on one of those [All]-Defensive teams," O’Neale said in an interview with FiveThirtyEight. "[I’m always] guarding the best guy."

He’s making his case again, but with a notable difference: how much more active he’s been with his hands.

O’Neale’s current steal percentage (2.7 percent) is up to nearly double his career rate coming into the season (1.4 percent) and is among the NBA’s top 25. He’s averaging 3.0 deflections per 36 minutes, per NBA.com data, a far cry from his previous career-high of 2.1.

"I can’t speak enough about his commitment to the defensive end," Snyder said of O’Neale. "Our whole group needs to have that commitment right now. … How we defend impacts our offense."

That last sentence is important, and it illustrates how O’Neale’s value has begun bleeding over onto the other side of the ball. Plays like these are becoming commonplace:

That career-high steal rate is translating into "pick sixes" and points on the board for the Jazz. O’Neale is among the league’s 10 most efficient players in transition2 early on this season, per Synergy Sports data on NBA.com; both his efficiency in and frequency of the fast break are the highest of his career.

O’Neale is breaking away more often this year

The resulting impact on the Jazz’s transition game is even harder to miss. Even with O’Neale’s increased aggression, Utah only gets out on the break at roughly league average frequency when O’Neale is on the court, per Cleaning the Glass. They’re scarily conservative when he rests: Their rate of playing in transition in these minutes would be the lowest for a single team since 2016-17. Partial credit here also goes to Mitchell, who’s shown a similar improvement with defensive hands and resulting offensive transition; Mitchell and O’Neale share the vast bulk of their minutes, so separating the quantifiable credit here is tough, but film shows both guys making a major positive impact.

O’Neale is a motor constantly in fifth gear. He’s banging with the much larger John Collins for a rebound on this play, a full 90 feet from the opposing rim, but still beats half the Atlanta Hawks down the floor and finishes nicely with his off-hand:

Powering this improved showing on the break is O’Neale’s finishing ability at the rim, where he looks more confident than ever before. His 86.4 percent success rate within 5 feet of the hoop leads all NBA players with at least 20 such attempts this season; even when this number inevitably drops a bit over a larger sample, it seems like last year’s career high (66.7 percent, elite for any non-big) was no fluke.

That singular skill upgrade makes O’Neale more valuable in other parts of the game, as well. He spent much of his early career as purely a spot-up guy on offense, but he slowly began to spread his wings attacking closeouts more aggressively over the last couple of years. This year, he’s flying into defensive creases and completing tough finishes. (You can catch him admiring that left hand after a few of them if you look closely.)

"That’s just me being dedicated and wanting to get better every day, in every aspect of my game," said O’Neale, who credits regular work with Jazz assistant Lamar Skeeter for helping him continuously improve. "Practicing different shots, being able to finish around the rim, especially against big defensive teams. That keeps the defense on their toes, creates offense for other people."

Maybe most enticing has been the advanced passing reads O’Neale is making. He's generating 5.0 potential assists per game this year compared with 4.5 last year while throwing a nearly identical number of total passes per game.

That vision has led to Snyder using O’Neale in a new role: setting picks for Jazz star ball-handlers, then utilizing the space teams give him off resulting traps, a la Draymond Green rolling out of a Steph Curry pick and roll. Over the last three years, O’Neale has almost doubled the number of picks he sets per 100 possessions, going from 9.5 in the pandemic-shortened 2019-20 season to 17.0 this season, per Second Spectrum.

"In pick and roll, [when] he’s rolling into the lane, or driving the ball, he’s more under control when he gets in the paint," Snyder said. "He’s playing off two feet more, which slows him down a little bit. Whether it’s making a pass to the perimeter, throwing the lob or finishing, that’s been something that he’s spent a lot of time on.

Put it all together, and O’Neale is posting by far his best career numbers in offensive RAPTOR — despite an early season 3-point shooting slump that’s infected him and several other Jazzmen.3 He would look even better if the jumpers were falling, which a years-long track record suggests they will eventually.

Even if certain pieces of O’Neale’s early season success regress somewhat over larger samples, all signs point to yet another feather in Snyder’s developmental cap.

"It’s a credit to the players," Snyder is quick to note. "Sometimes you can be content, especially if you’re successful in this league and have established yourself, to do what you do, so to speak."