Okay, right off the bat I'm going to say that the NBA records right now this season are a bit misleading. After all, the team we are today is not the team we're going to be in a few months. And the record we have today is not a true indication of how good we are going to be. I think the same is definitely the case for the Raptors. They only have 1 win so far this season. But ... they're actually better than a 1 win in 6 team. They seem to be that "meh" team our Jazz team is capable of over-looking when starting a road trip. We shouldn't do that though. First of all, they have this Kyle Lowry dude on their team, and he's capable of beating us by himself -- or at least appeared to do so last season with the Houston Rockets. They are also deceptively deep at the big spots with Andrea Bargnani, Jonas Valanciunas, Amir Johnson, Ed Davis, Aaron Gray -- and this Linas Kleiza character. Their entire team seems to be made up of either bangers or three point shooters (hey there Jose Calderon, Landry Fields, and Terrence Ross!). I am wary of them, and I'd rather be wary of them than over look them.

After all, we started off our LAST road trip overlooking the first team, only to fall to the New Orleans Hornets. The Jazz can't slip up like that and expect things to be okay.

All that said, while the Raptors are better than some thing -- we're way better as well. And on paper and hopefully in the game tonight, we'll prove that we're the better team on the court. Hey, we made the NBA Playoffs in the tough Western Conference last season. We're supposed to be better. So let's play like it, starting tonight.

These two teams played once last season; at home. And we lost in overtime. It was that seminal "we overlooked them, and couldn't put them away" games. Kleiza killed us, even miracle threes from Paul Millsap couldn't save us. We played without Big Al though. Tonight we return to T-Dot. And the last time we played there Al Jefferson had a game winning tip-in. The overall historical series between these two teams is in our favor, but that's mostly because back then our team was led by two HOFers who did not overlook teams.

This is the first game in our four game Eastern road trip. It's our second road trip this month, and when this trip is done we would have played 8 of our last 10 games on the road. Our last trip had us going 0-3. It would be nice to get a road win. This game is in 2 hours, and I have a bunch of other posts to do . . . so this preview is going to be a little light . . .

I asked a few Raptors big-wigs, on my customary short notice, and only Josh (@HoopPlusTheHarm) replied. He writes and edits at the SB Nation Bobcats site Rufus on Fire as well. (It's not just Cardboard Gerald who does everything!) 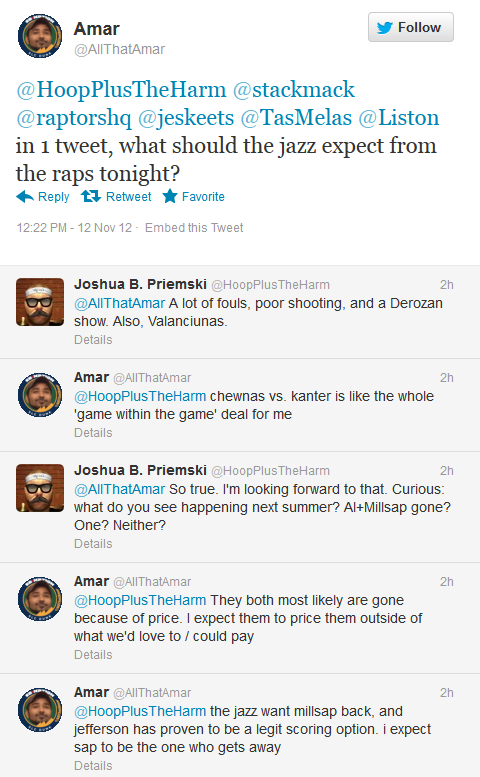 Check out our strange convo here in full.

The Jazz get their first road win of the season. Why? Because the Raptors don't rebound well, and apparently don't rotate well either. Their opponents are shooting 39.2% from deep this season.