Game preview! Somehow up before 6 pm for once!

Tonight is the second game of the regular season, and our first road game. The Jazz are also on their first road trip, and will play three games in the next four nights: tonight @ New Orleans, tomorrow @ the San Antonio Spurs, and then on Monday @ the Memphis Grizzlies. The Spurs just beat the Oklahoma City Thunder while Manu Ginobili sat, so they are still a pretty awesome team. The Grizzlies were another Western Conference playoff team - and played last season without Darrell Arthur, and only had Zach Randolph for 28 regular season games. This year they are bigger and better. So on this road trip the only "easy" game is tonight. Against the team that just picked up the #1 pick in the NBA Draft: Anthony Davis.

They also added Ryan Anderson (sharp shooting stretch 3/4), Robin Lopez (who will start at the 5 for them), and Austin Rivers (the 10th pick in the draft). These aren't the same old Hornets. But we're not the same old Jazz.

The Jazz are 40-23 All-Time against the Hornets, but Chris Paul and Deron Williams aren't here anymore. And even back in the "good old days" the Jazz haven't played well in New Orleans (back when we had Stockton and Malone we lost to the Hornets on their season opening night). The Jazz have lost 15 of the last 32 games in their gym, and 4 of the last 6 overall. (This data and more good stuff can be found in the media notes section!)

Last season the Hornets beat the Jazz 2 out of 3 times.

That last loss, followed by a loss the next night in Memphis (with 5 games left before the playoffs) almost sunk our season. In those three games we had trouble with Jarrett Jack (27 and 11) in Game 1; Chris Kaman (27 and 13) in Game 2; and Eric Gordon (25 and 6) in Game 3. The good news is that Jack and Kaman aren't on the team anymore. And right now Gordon is injured. (All the more for some no-name guy to kill us, I guess?)

This is a home coming game, as the Utah Jazz used to be the New Orleans Jazz. Paul Millsap is from the state, and went to college at Louisiana Tech. And Al Jefferson and Mo Williams are hosting a number of servicemen and women from the Mississippi National Guard tonight. But it's still a road game, and a road game we must win on this trip; after all, 12 of the Jazz' first 18 games are on the road. There are three different road trips of at least three games long. The Jazz need this game, because it's against a Western Conference foe (playoff seeding, yo), and they are hurt. No Eric Gordon. They are led by a rookie (Davis had 21 points in their only game), their other rookie went 1/9 the other night (I see you Doc Rivers' son). Our team should beat a team where the vet leaders are Ryan Anderson, Al-Farouq Aminu, and Robin Lopez.

Will our Jazz team beat them? I don't know. It's going to be an interesting game for certain. They have a bunch of stretch bigs, and we only have Paul Millsap. I also don't think the refs are going to let us play rough tonight.

It's impossible with everyone's schedules to do a Jazz Jam Session for every game. (After all, they are for more than just games, as you'll all see soon!) But there were some, uh, tweets sent out . . .

Rohan Cruyff, when he's not being a rocket scientist, runs the SB Nation Hornets blog At The Hive. He had this to say to my amazing question: 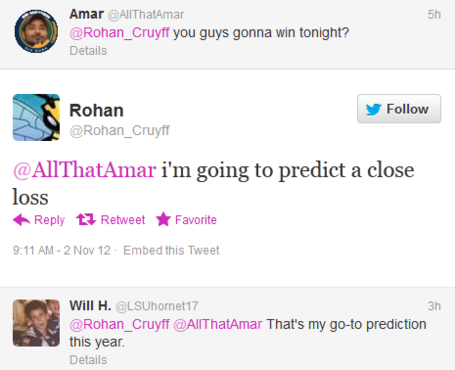 As always, you can follow their side of the action tonight @AtTheHive and @Rohan_Cruyff

There are other cool Twitter #Follows out there too, if you are interested in having me list a few for every game preview I suppose I could. I am on twitter all day long. One of them is @snavetrebor. He and I go down memory lane here . . . 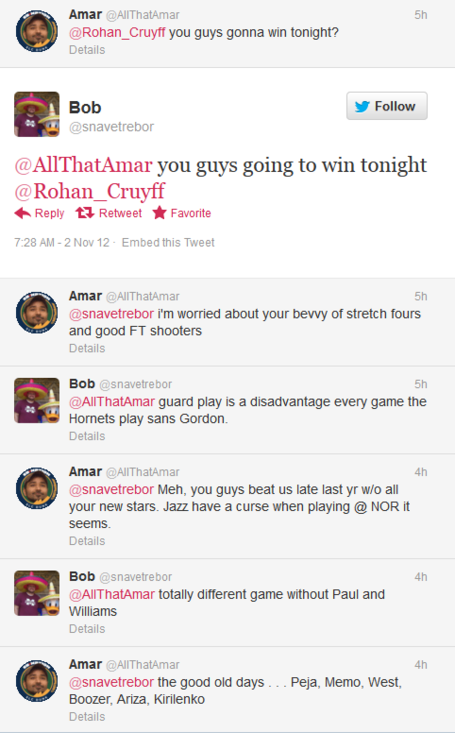 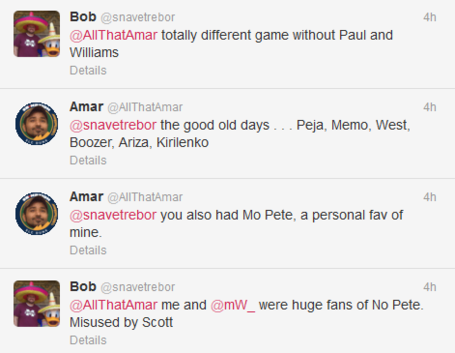 Free Throws! The Hornets are shooting 91.3 ft% AS A TEAM right now. Heck, their rookie bigman went 9/9 in their first game alone. We can't send them to the line, yes I know that they can't shoot 90% for a season -- but in general we have had a habit of fouling jump shooters and guys who drive. This team is all of that. Additionally, the Jazz need to keep attacking the paint and collecting fouls. The Jazz went to the FT line 42 times in their opener. Even with our shakey shooting from the strip -- I like those odds. If the game can be physical in our favor, I think that will determine the game. If we are physical and get called for a lot of fouls . . . then no bueno.

... I would be okay with a loss tonight if we come back to beat the Spurs and Grizz though ...

Jazz win! Why? Well, their best player (Gordon) is out, and they have a bunch of new parts trotting out there (Davis, Rivers, Anderson, Lopez) to be major players. We have continuity on our side, yes, we added three major rotation guys, but the rest of the guys made the playoffs together. Early on in the season stuff like that can be the difference. The Jazz win, and Alec Burks will play longer than 2 minutes this time around. And hopefully we'll all find something else to go crazy about for 24 hours. (Not really a fearless prediction -- but a 100% prediction)