From opening night till now this will be our third game in four nights; and second road game in two nights. It's a pretty tight schedule, but in the end everyone plays 82 games. The Spurs recently took care of business of the New Orleans Hornets in their gym, before playing smart ball down the stretch and beating the Oklahoma City Thunder in a big win on TV. And well, aside from the dalliance with Eddy Curry, this team did not do anything crazy in the off-season. They drafted Nando de Colo (and Marcus Denmon), while resigning Tim Duncan, Boris Diaw, Daniel Green, and Patrick Mills. But you don't really need to change things up if you were only two wins from the NBA Finals.

We know all about the Spurs and should have a very healthy respect for what they do to teams.

After all, we only PLAYED the Spurs 8 times last season, four in the regular season and four in the playoffs. And, well, welp even, they went 7-1. The one game we did win was the game that Gregg Popovich threw down the stretch to give his starters a rest. I'm going to go even go into the point form section here to detail what happened in each of those games. I think all Jazz fans can remember pretty well what happened; we couldn't stop dribble penetration, and our inability to rotate properly either caused a layup line for their ball handlers, or super duper open shots for their spot up dudes (not just wings, but guys like Matt Bonner routinely eat our lunch). It's simple, effective, and most of all, it works.

This is a measuring stick of sorts. We spent our off-season getting better at offense -- while defense was the real problem. Tonight's game will help us understand what we need to work on.

Tonight's game is at 6:30 PM Utah Time, and it will be on TV (ROOT Sports), and Radio (1280 AM / 97.5 FM). It's our third game of the season, same with the Spurs. For both teams it's the third game in four nights. We played last night, they did not. I think San Antonio usually gets our goat -- and if we come out shooting from the outside as our main offensive tactic then we've already lost the game. If you can't establish inside offensive dominance on the New Orleans Hornets who did not play Anthony Davis for three of the four quarters (rounding up here), then you really need to improve.

The Spurs know what works, and it's all about moving the ball around on offense, partly as a product of dribble penetration, and partly in order to set up dribble penetration. I did not watch their first game (against the Hornets), but I saw most of their game against the Oklahoma City Thunder. They are the "same 'ol" Spurs -- but Tim Duncan looks better. Tony Parker is still Tony Parker. And according to Pounding The Rock it seems like Manu Ginobili will be playing tonight. Yikes.

In the playoffs we were forced into attempting to quell their dribble penetration by using Devin Harris (who played a great defensive 1st quarter in Game 2, that I think a lot of people forgot about), and Jamaal Tinsley. The lack of Earl Watson is a huge deal that I think a lot of Jazz fans have similarly overlooked. He makes our team better on offense and on defense. The Jazz are really bad at defending speedy, strong, or athletic point guards. (Darren Collison - Tyreke Evans - Derrick Rose types) All teams do, but we do it even worse than others because we do not rotate well in recognition of this. If Greivis Vasquez is dropping game winners on you off the pick and roll then you need some help. Help defense. Hopefully we seen an engaged Derrick Favors tonight. He was huge in our last five regular season games last year -- consistently playing, and playing consistently well on defense.

All of our bigs have sucked so far this season (Al Jefferson -- 11 ppg, 37.5 fg% is a good example), or if they haven't sucked, they haven't produced like we expect them to. I'm singling out Derrick Favors here because he's supposed to be our best defensive big. I'd love to see him on the floor, and I'd love to see him defending like we know he can.

I had a great convo on twitter with @DocRostov. Really. It was great. 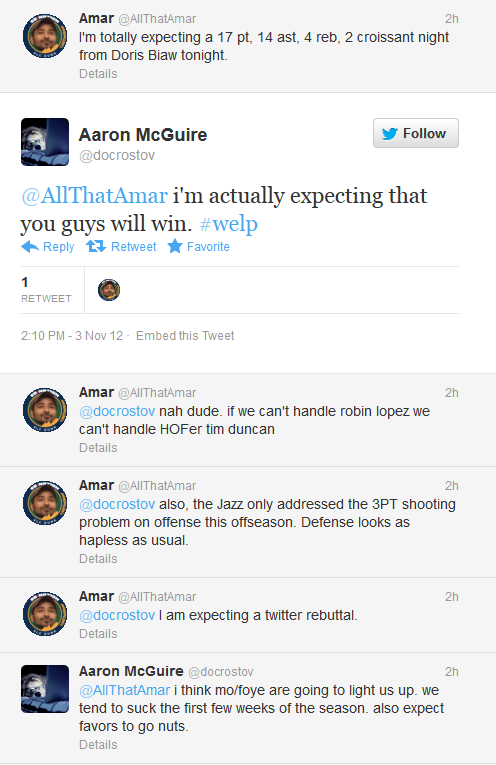 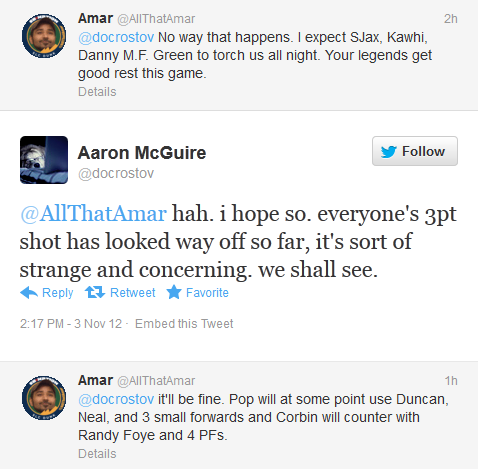 Anyway, you should follow Aaron on twitter, and visit his great blog GothicGinobili.com -- plus he's a smart guy who doesn't troll other teams or fans. Quality dude.

San Antonio isn't old, but they're good. They're better than we are at the slow game. Attempting to out slow them is to only fail slowly.

I really believe that if Alec Burks does get playing time tonight he's going to be playing with a monkey on his back. He'll try really hard, probably be playing a step too quickly, and make mistakes. He'll be pressing. And he'll probably rush his shots, and miss shots, shots he made all preseason long. Foye "won" the backup SG spot in training camp. Burks is a young guy who hasn't played any meaningful minutes since the Spurs series last season. He's probably going to attempt to "win back" his place in the rotation on his first few minutes on the court tonight. And it's going to be really, really, really hard for him to succeed.

So, Mission accomplished. We only needed 68 games to break this shooting guard. I think that's a record.

Spurs win. Why? Because they're the Spurs. We can't even beat the Hornets. Is this section even serious anymore?