Today the Utah Jazz will be doing something a little bit different with their NBA Draft workouts. What big, wild, crazy thing are they doing? Well, today the Jazz will work out their first non-Senior NCAA player. By the end of the day 23 of the 24 players worked out by the Jazz for this upcoming draft will have been four (or more) year college players. The first underclassman to be asked to play in our reindeer games? It's Xavier's point guard Semaj Christon. Semaj will be going up against DeAndre Kane, the four year player from Owa St. These two points are roughly the same height, and have some of the same dimensions (even down to their body fat percentage being off by only 0.3%!). Both guards took part in the NBA Draft Combine (so we're now up to 3 guys from the combine, the previous one was Melvin Ejim). Rounding out the rest of this workout will be Jamil Wilson and Luke Hancock, two wings; and Travis Wear and Wally Judge, two guys projected to play power forward.

Ultimately though, not all of these guys are going to get drafted. Two of the players don't even have an agent yet. Three of the players aren't even showing up on my 150 player consensus board. Still, the Jazz are doing their due diligence by working out all of these players. After all, it was a guy like Wesley Matthews who made it through (iirc) two Jazz predraft workouts, then training camp to end up being a rookie starter on a playoff team. It would only be hubris to work out Top players and miss the diamonds in the rough.

Semaj (C Maj? I'm going to call him that now, even if his name is obvious See-Mahje) and DeAndre are essentially the same dude in terms of dimensions. Kane is a little taller in shoes, and apparently has a combo guard game. I'm not so certain myself. Semaj is also only 21 years old; however, it's not like we're hurting for young guys. Jamil Wilson and Luke Hancock are both interesting players and Wilson has NBA level length on his side. Hancock is a mystery in this department. As are the 'bigs': Ware and Judge. I don't have a lot of information on these players, so I'm not just going to make something up. I'll just say that they'd be a great comic book character, the Warjudge. 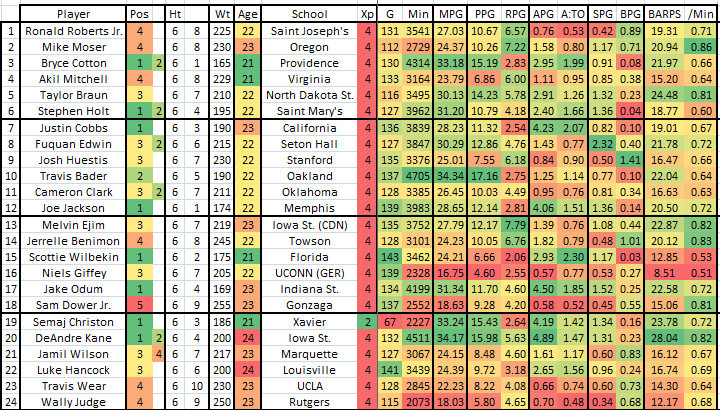 Okay, I'm just going to really focus on Semaj and DeAndre here. They appear to both be from that new mold of point guards who are high scorers (Semaj avg 11.72 FGA/game, DeAndre 12.83 FGA/game) who don't really handle the ball well (A:TO ratio). Kane, older, wiser and more experienced, held onto the ball just barely better, but did a lot more work on the glass. His Iowa St team needed it, it seems. Out of everyone who has worked out so far or currently revealed to work out, he has the 'best' stats. His BARPS are the highest, and his BARPS / min are tied for third. But College stats are kind of meaningless to a point. Like the NBA game using per game averages can be hard because not every team has the same talent level, not every coach plays at the same pace, and not ever player is expected to have the same role. DeAndre looks more ready to help your team today, but because of the allure of youth and potential, by the stats the only one that matters for Semaj is that he's three years younger with only two fewer years of NCAA experience.

Jamil is noteworthy here because as a wing he averaged more BPG than the two bigmen on this list. I guess that 7' wingspan is helpful on defense, huh? (Jazz History: Ronnie Brewer 's wingspan was 6'11.25", as a wing player. Gordon Hayward's was only 6'7.75") 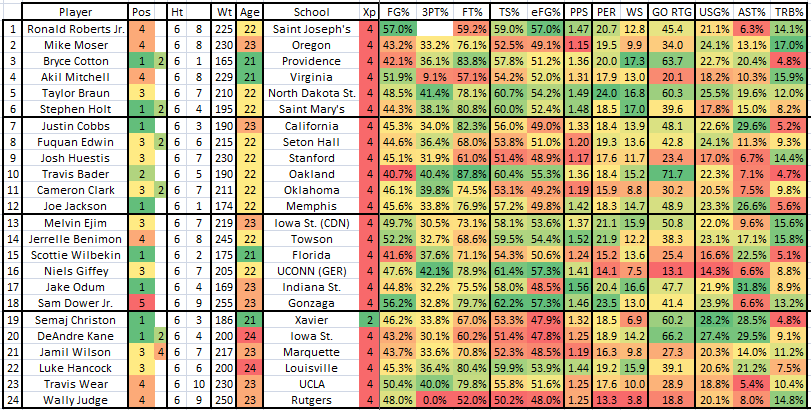 If you've been watching much of the playoffs this year you'll see that point guards who can come off the bench and hit threes are useful. These two cats may be able to, but at the NCAA level did not demonstrate that skill. They also weren't that great from the free throw line. These are not advanced stats. These are simple ones. Absolving them, somewhat, were their 18.x PER values, and nearly 1:1 USG% to AST% rates. They were big parts of their offenses and the other team had to account for them (GO Ratings of 60+). No two players got to the line more out of all the players the Jazz have brought in -- both guards averaged at least 6 FTA per game.

So, think shorter, less explosive Russell Westbrook type of point guards. Not the Jose Calderon type who is a pass first guy who can hit threes.

The jury is still out on if they can defend.

As for the rest of the group, these guys are all offensive afterthoughts, but for the most part were somewhat efficient. Only Judge looks to be hopeless on offense, but he worked the glass pretty hard and hustled. Wear is a big who can hit threes. He didn't take a lot, but he made 40% over his four year NCAA career. Hancock can space the floor, but compared to some of the other wings worked out, he did not really distinguish himself with his College play.

The Jazz won only 25 games last year, so the team needs everything. We assume that point guard and bigman aren't immediate crisis points though. Only two wings in this group, and the two best players are both guys who could be 2nd rounders. This seems like a very specific workout for just the headliners, moreso than any other workout so far (unless you buy into that big Ronald Roberts Jr. vs. Mike Moser rivalry). Each workout so far has had two point guards, but it hasn't always been two point guards of the same 'draft area'. Personally I think that either Semaj or DeAndre could make it in the NBA, but they would really need to be seasoned in the NBA-DL.

Semaj is a bubble first rounder, but may be projected right where the Jazz pick at #35. Kane could be available in the low 50s. This workout looks to be the one where they could schedule two guys to go at one another. Point guard isn't a need, but who knows, maybe one of these guys will really play hard and impress today?

Good luck to all of them, and I hope they leave it all on the floor.