Dennis Lindsey and company aren't taking the summer off

The NBA Draft is in a few days. It's crunch time for NBA front offices, every new piece of information has to be carefully weighed as to not fall in love with recency. Utah Jazz scouts have years of data on the players that will be called up to the stage to shake Adam Silver's hand. And while some teams are more than confident with their test answers, the Jazz brain trust seems to be the group that's writing furiously till the end, and won't stop until they hear "pencils down".

Sure, the plane tickets are all booked for New York (myself included), but there is still so much uncertainty. No doubt by now you've heard that Joel Embiid, the erstwhile first pick of the draft, has a new medical problem with one of his feet that casts his draft stock in doubt. That uncertainty can wreck a team that didn't do their homework. The Jazz clearly did their this season.

Utah hosted and worked out 91 different players so far this draft cycle. Just to put things in perspective, the Jazz have three picks (#5, #23, and #35) -- and there are only 60 players being drafted that night. Still, the Jazz have worked out more players in this year than in the 2010, 2011, and 2012 draft cycles put together. 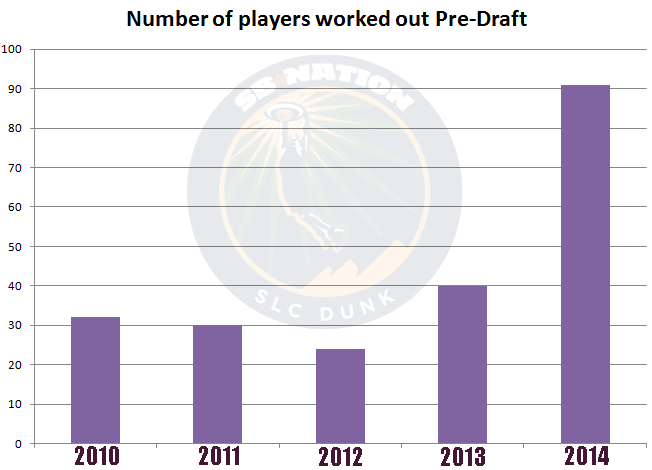 This is really the Dennis Lindsey method -- do your homework, and spend money to scout better. Scout more. Scout smarter. This is what looking at 30.3 people per one draft spot looks like. Or more realistically, Lindsey doesn't go into drafts anchored to the spots the fates give his team, he's ready to wheel and deal. And this is part of the reason why I think he drafts for need, not best player available -- but more on that at a later date.

The Jazz do need everything though, and working out lottery players and second round bubble guys shows me that while the team may not perform as expected on the floor, Lindsey and crew are not fooling around in the front office. I wouldn't be crazy to think that the Jazz may squeeze in a few more interviews this week and pump up that number closer to 100 before all is said and done.

Over the last few days I've gone back in time to re-read what people thought and felt about the team going into the draft. It's interesting to see the opinions we had about every player from Al-Farouq Aminu to Tomislav Zubcic. No matter who the Jazz end up drafting, I wouldn't bet on them coming home with the Jazz. You don't work out 90 players for the purpose of being married to the #5, #23, and #35 spots.

But that's just me trying to predict what Lindsey will do on draft night. (It's going to be hard to expect anything now that Tyrone Corbin isn't there to make that call to get Trey Burke, the move that he clearly got the ball rolling for, as we were told.)

I'm excited for the NBA Draft. But the Jazz are not game planning for just one night, they're obviously planning to win multiple battles. No matter what does happen, I do expect the Jazz to get one of the highest scores on their draft night performance. And I do know that they'll be working on it till that pencils down moment.

For the rest of the GMs in the league, when Lindsey is running a draft war room, school is in session.