Dante Exum is rare, and you'll soon see why.

Share All sharing options for: NBA Draft 2014: Dante Exum is physically the most gifted point guard in Utah Jazz history

The Utah Jazz know a thing or two or 15,806 about the point guard spot. For the majority of the last four decades, this spot has been dominated by John Stockton, and to a lesser extent Rickey Green, Deron Williams, and a dirty dozen of ball handlers. For the most part the point guard spot in Utah was a position of strength where solid fundamentals and pin-point passing trumped size, speed, and agility. A point guard wearing Jazz colors beat his opponent through hard work, quick thinking, and a in the case of John and Deron, a desire to rip the heart out of the guy defending them. Last season a new era at the point guard spot started with the draft night acquisition of Trey Burke. A year later the Jazz have added Dante Exum, and a point guard renaissance appears to be starting. Trey is that traditional, small, smart, pick and roll proficient point guard that harkens back to the time of short shorts and ringer rolls. Exum, on the other hand, is simply the most physically gifted point guard in Utah Jazz history.

This isn't hyperbole, either. I have been keeping track of every player we draft, trade for, or sign as a free agent -- and if there are anthropometric statistics of them you can bet that I've hunted them down. While this is an incomplete list, the data on Jazz point guards (and combo guards) I have includes: Jacque Vaughn, Brevin Knight, Jason Hart, Jamaal Tinsley, Earl Watson, Mo Williams, Devin Harris, Deron Williams, Dee Brown, John Lucas III, Randy Foye, Blake Ahearn, Ronnie Price, Sundiata Gaines, Eric Maynor, Jerel McNeal, Alec Burks, Diante Garrett, Ian Clark, Raul Neto, Trey Burke, and Dante Exum. That's 22 point guards, and a pretty good representative sample of the last few seasons, if not longer. (N.B. Kirk Snyder was a listed combo guard, but I removed his stats for this, he only played 2/3 for the Jazz.)

And if you do all the math (and I did), Exum is, on average, 1.0 Standard Deviations (STDEV) better than average. 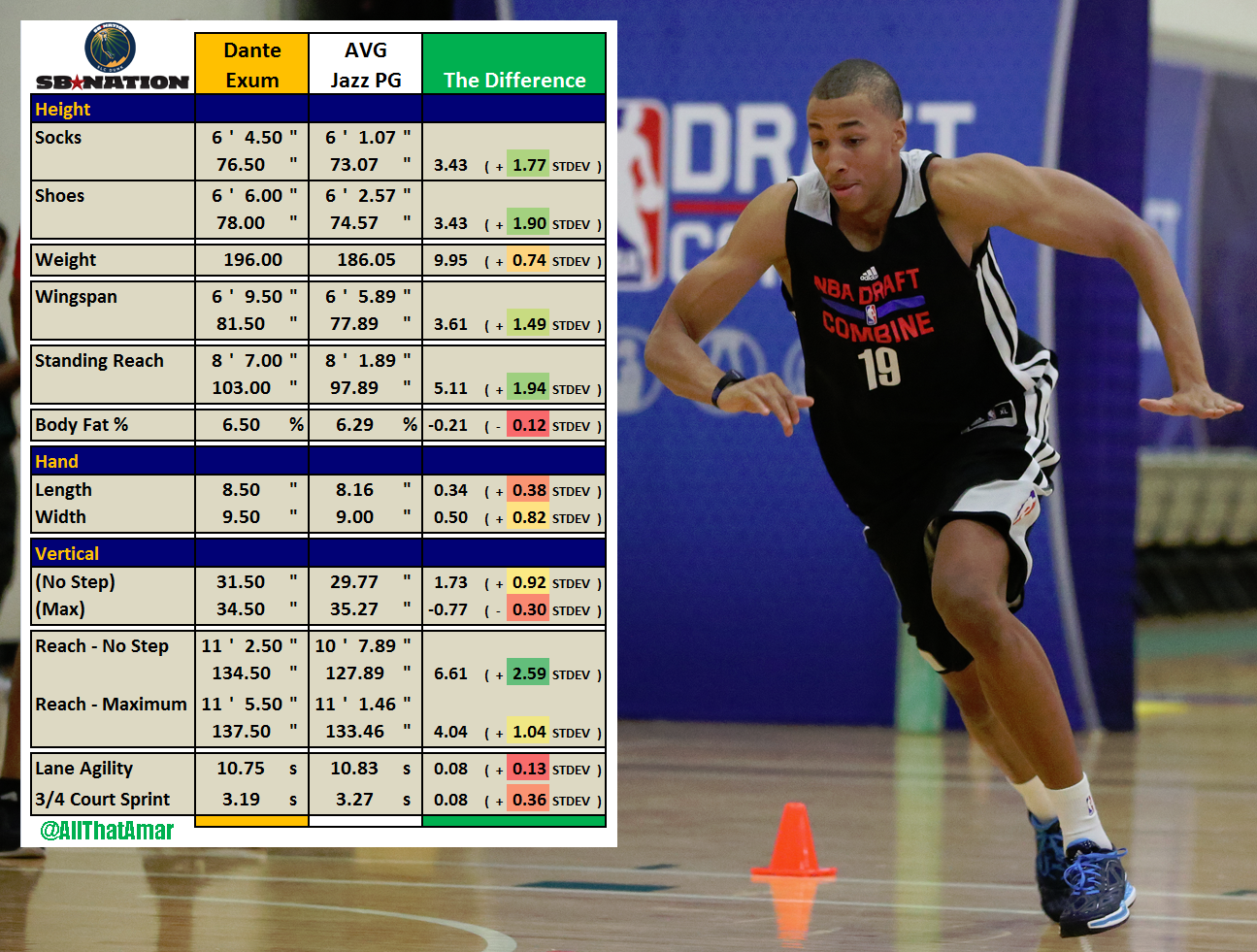 Yes, these are just draft combine numbers, and players age, change, get injured, and get better over time, but from this starting point the 18 year old is a quantum leap in athletic ability. So much so that if people want, I can do another one of these where it's Exum against SG/SFs.

Where do these numbers put him against all the Jazz players who have been tested? we have the numbers for 57 players. Dante is the 12th fastest guy by rank, but if you look at the numbers, technically, he should be tied for #7th. He has a greater wingspan than Kyle Korver, Kirk Snyder, Rodney Hood, Wesley Matthews, Gordon Hayward , and so on. His standing reach is also better than most of those guys as well. He has the same no step vertical as Derrick Favors. And his max reach is 0.50" less than that of Paul Millsap, and 1.50" less than center Curtis Borchardt.  And out of 57 players his lane agility score is #6, and sprint is #11. How fast is that? That's faster than a "never been injured before" Devin Harris.

He's not just the most gifted point guard we've had but you could argue that he's one of the best athletes period. And this is before become 20, learning how to exercise, going to P3, and getting stronger and faster. He's going to be a beast, and help this team become one of the most dangerous teams around.

Of course, he still has to play basketball. That's the easy part for him though. It must be easy when you have one of the quickest first steps and the length and agility to soar and dunk with ease.

Watching a guy with his size and handles you almost want to play him at shooting guard, but he's a point guard. And I'll be damned if I don't see a lot of Penny Hardaway in his game.