According to ESPN, the world wide leader in victim blaming, their Summer Forecast for the 2014-15 season suggests that the worst teams in the NBA will be the Philadelphia 76ers, Milwaukee Bucks, Minnesota Timberwolves, Utah Jazz, and Orlando Magic. This is almost exactly the bottom five teams from LAST season, but the whole Kevin Love trade seems to mean a lot here. You can check out their forecasts for the Eastern Conference here, and the Western Conference here. While their predictions are a possibility (Philly hitting 18 wins, Utah at 26, and so forth), I wanted to double check against the last 15 years of the NBA Draft lottery. So I did.

I'm becoming increasingly hesitant to read some other blogs that are just walls of text. I hope that never becomes the case here. Anyway, here are the lotto seeds for the last 15 years, and their average wins +/- their standard deviations.

What's interesting here is that on average the #14 seed in the lotto is an above .500 team. And that, well, the top two seeds win fewer than 20 games a year. Ouch. The ESPN list has the worst two teams being Philly (18 wins), and Milwaukee (23 wins). so though that alone they deviate from history off the bat. But by not that much, as 23 wins (for the Bucks) is between one and two standard deviations. Wow. Such math. Very nerd. I know. Let's move on.

The Top 5 seeds in the Lotto: 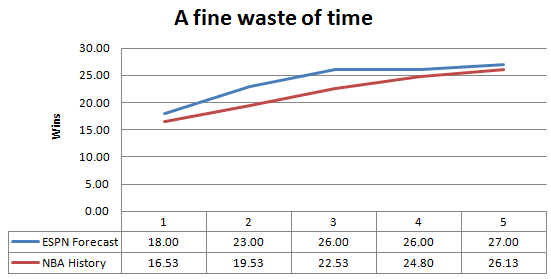 There's no real big difference. The greater deviation occurs when you go past the Top 5 lotto seeds, and the deviation increases when you recognize that there's a greater skew in the last few years from top of the lotto to bottom in recent years. Just look at last season where the worst team had 15 wins, and the best team in the lotto had 48. Yikes.

As this is a Utah Jazz blog I'm not too crazy with the idea that the Jazz will go from 25 wins in a worst case scenario year to --> 26 wins after cleaning house in the front office, coaching staff, and roster. But you never know. My hope is that the Jazz are able to go beyond the "Bottom Five" record going into next year's lottery. Doing so would show progress and improvement, and more than anything else, an upward direction for the franchise. To get to that next tier of the lotto they would have to win between 27.40 games and 34.00 games. Some Jazz fans are cavalier enough to predict a +10 game improvement from last season to this season. That would put them at 35, and well beyond that next lotto team tier.

I don't know how many teams the Jazz can jump, but I wouldn't be surprised to see them finish with better records than the 76ers, Bucks, Magic, and Celtics. It should be a toss up against the Timberwolves (who will be better than some people think, even after the trade goes down), Lakers, and Kings. The fact that the Jazz, T-Wolves, Lakers, and Kings all have to play one another will balance itself out. No team from the West will be horrible, and not team from the west will be without a few schedule wins either.

If you are interested in the top picks next year then you probably are an Eastern Conference fan. For Utah, a team with another three picks in the 2015 draft, I know that the draft is all but guaranteed this time around in the tough West. But the fervor that Jazz fans showed towards the lotto will easily turn to fury this time around. The team has so much youth now that the franchise is even turning away solid rookies prospects (example: trading away Jarnell Stokes for a future pick). The team has never boasted so many 1st rounders and lotto picks before: Derrick Favors (#3), Enes Kanter (#3), Dante Exum (#5), Gordon Hayward (#9), Trey Burke (#9), Alec Burks (#12), Rodney Hood (#23), Trevor Booker (#23), Rudy Gobert (#27). That's a list of nine players who went in the first round of the last five NBA Drafts. If you add on Steve Novak (#32) and Carrick Felix (#33) this team, by draft standards, has the most potential of almost ANY Jazz team in the last four decades.

A 26 win season wouldn't be something to look forward to this time around. That's just my opinion. And according to the history of the NBA Draft lotto, a 26 win season would put the Jazz right where they were last year. Ultimately we hope that the team bottomed out, and will start climbing back up in the standings now. The last thing the team and fans want is for the franchise to flatline at the bottom of the standings for a while.

Hopefully I don't have to do a lot of scouting for the 2015 NBA Draft this time around. But at least this time I will know more of what to look forward to as teams tank down the stretch.