FIBA World Cup 2014: Utah Jazz draft pick Ante Tomic, once out of mind, may not be out of sight for long

No really, this is important

Share All sharing options for: FIBA World Cup 2014: Utah Jazz draft pick Ante Tomic, once out of mind, may not be out of sight for long

Many Utah Jazz fans are really interested in the FIBA World Cup 2014 this year, and interest is mostly because of the USA Basketball potential selection of Gordon Hayward (Kyle Korver too); and because of rookie point guard, and Australian phenom, Dante Exum. But there's more to follow than just those two storylines. Frenchman Rudy Gobert looks to be a starter for his club, and play with beacoup pride for his side. Gobert looked great in Summer League and could make a huge jump for our squad this year. And of course, Brazil's Raul Neto is someone we hope to see get off the bench for his national team and play some solid minutes. But there's one guy out there who we are really forgetting. No, I don't mean Carlos Arroyo. I mean Ante Tomic. (Full details on all our former and current Jazzmen in the FIBA tournament here!)

Earlier this summer I felt like things were going nowhere and that Tomic would NEVER play in the NBA at all, let alone the Jazz. But, well, my position on this topic has evolved a little bit since then.

Why do I feel differently now? Well, for the first time ever I have put some worth to the words of Walt Perrin. In the case of all Utah Jazz execs it's really about what they don't say that matters. Back in May, Walt Perrin was quoted as saying (per Mike Sorensen, of the Deseret News):

Q: You have a couple of foreign players you drafted in the past, Ante' Tomic in 2008 and Raul Neto last year. What is their status?

A: Both have had pretty good years, and Tomic is on one of the better teams in Europe. We're at the point with him where we're trying to make that decision (whether to buy out his contract). With Raul, we're not sure, we haven't talked about it yet what we may want to do in terms of bringing him over this year or keeping him there for another year.

The issue here is the fact that he even mentioned Tomic as someone the brass is even discussing. At the time I felt as thought it would be that Jazz only saw Tomic as an asset to be moved; like the previous draft and stash guys the team has acquired (like Tadija Dragicevic, et al.). But by actually looking at things there is a small window of opportunity opening up.

And the big reason IS the World Cup. I wrote about what Tomic can bring to the table last month here. But because he is going to be in the 'sight' of so many it may precipitate more than just internal talks within the Jazz. Teams may want him and be bolder in talking to Utah about him. And, of course, depending on how he performs, Jazz fans could be asking for him too. The World Cup starts in 16 days, and that is a very small two weeks compared to the eternity that has passed since the 2008 draft and now. So let's try to look a little bit more at the whole "stash" aspect of this super long "draft and stash" process.

After all, he couldn't have been doing nothing all these years . . .

He has been a pro for a decade now, and played lots of games in a variety of tournaments in a number of countries. No matter when he comes to the NBA as a rookie he will be pretty seasoned. The 7'2 "Pau Gasol" clone has won a few championships and played in the finals of whatever league he has been in. 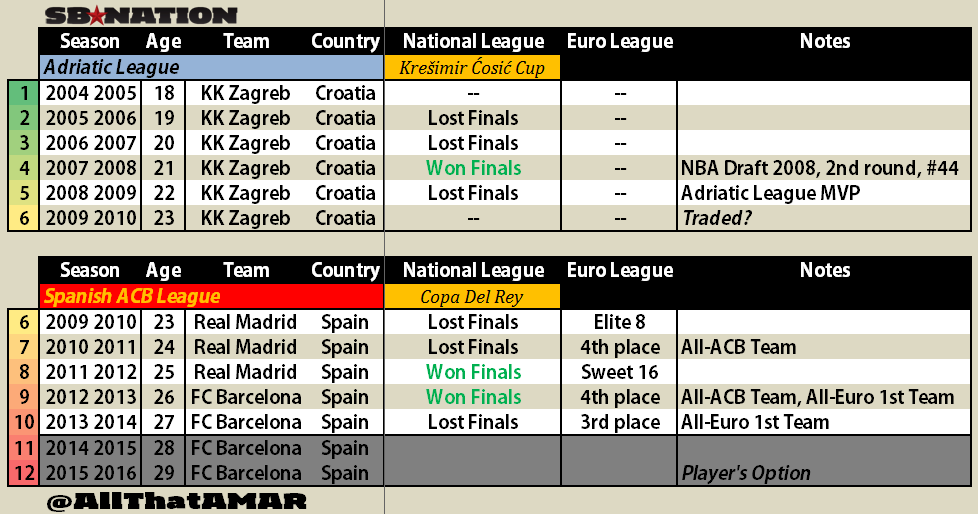 So on the team success level, he's been a part of lots of strong programs. While a Euroleague championship has eluded him, his time has been well spent. (N.B. Statistics are hand calculated from a variety of sources, like RealGM and DraftExpress -- information on that last "half" season with Zagreb is hard to find. Also, different leagues have seasons at different times of the year, not fully in line with the NBA.) 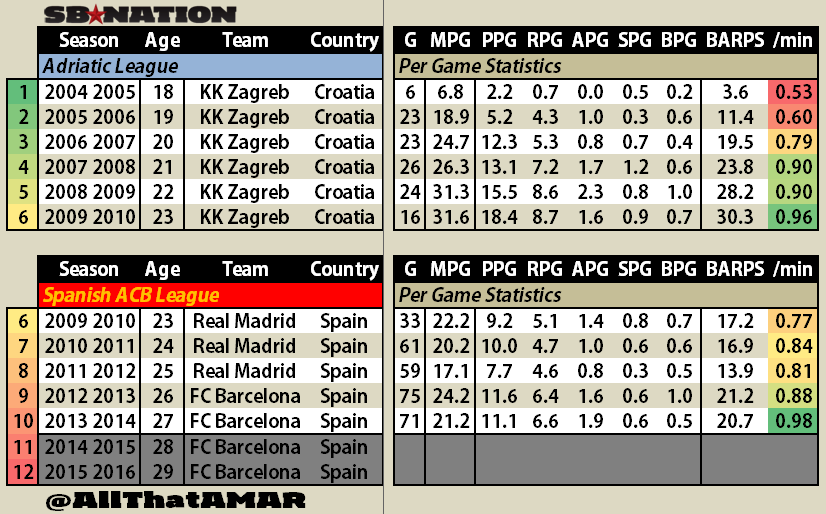 If you look at his stats the main take-away is that TODAY he is as efficient as he was during his MVP years in a lower league, against a better level of competition. If you look at his time in the Adriatic league as the NCAA, and his time in the ACB as the NBA-DL, then he is a guy who was a full-term college player who is now producing at the level he should be, but against real pros. Kind of like what would have happened if Morris Almond didn't go to the Jazz, and just started off in the NBA-DL and put in organic work on his game. The numbers are more impressive when you look at the per 36 values. 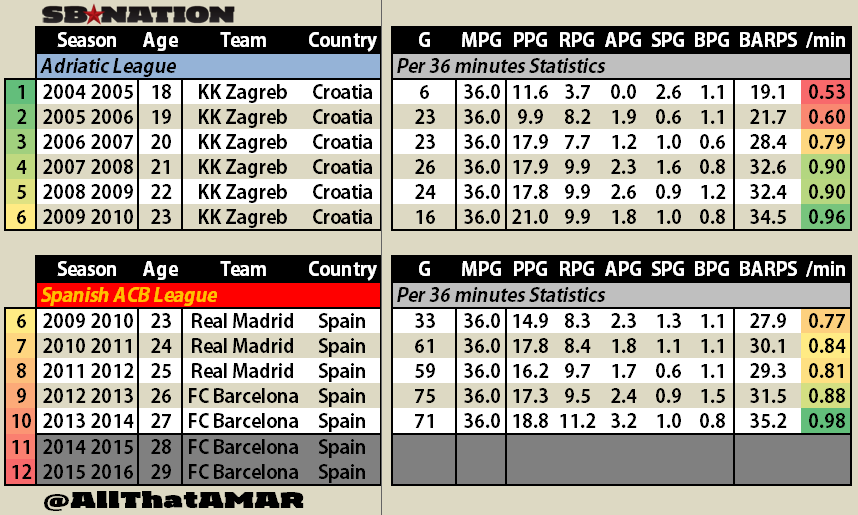 This naturalizes the fact that the European game is only 40 minutes a little bit. It's important to notice that he's effectively a double double guy against the best Europe has to offer (which includes pros from South America, Africa, and America in their leagues as well). One could argue that he's a better team player now than he was as the main man in Zagreb. He's frequently put on high light reels in Europe for his passing (winning best pass of the week a few times), and while he's not as huge a scorer, his rebounds and assists in his last season were waay higher than what he was previously doing.

Effectively who Ante Tomic is today, as a 27 year old is a waay better player than he was as a skinny 21 year old player that the team drafted in the second round, ostensibly an eternity ago.

And that's why you stash a player in the first place.

The team did stash him for very long. The idea most fans had was that the team would either buy out his contract or let it run out with Zagreb, the team he played for back when he was drafted. Instead of he moved to a better league after that contract was up, and with a better team in Real Madrid's bball club. That contract went though and the Jazz did not buy him out or bring him to the USA after 2012. By that time it was already four years of being stashed. We're two years later today after he signed as a free agent with another European team, F.C. Barcelona.

The hope went to worry, and then from worry to surliness.

This dude wasn't going to ever come over.

Well, that is precisely how I felt a few weeks ago. But what really changed my opinion was looking over some of the details of where he is as a player, where he is in terms of his career, and where the Utah Jazz could be.

There are some big "ifs" there in the last one. That is in addition to the preconceived notion that Tomic loves being a huge star making millions of Euros playing in a place where he is competing for championships -- to the point that he may not want to leave. But let's look at those IFs. Rudy Gobert could be a better defensive player than Kanter, and coach Quin Snyder wants to focus on defense. Furthermore, Snyder has hinted at being a team that counter-attacks more, that means you have to get a stop. And a stop isn't a stop until you get the ball back. Pat Riley said, decades ago, "No rebounds, no rings." And Gobert is a monster on the defensive glass. These two points of evidence as based upon 400+ minutes of data. If Rudy has a big season, and proves that he has a legit claim to greater than 20 minutes per game, then that pushes Enes Kanter out a little bit.

Kanter could have a great 2014-15, and deserve a big pay raise on the open market. And I think he will test the market for sure because there's no way the team is going to over-pay to keep him here as the deadline to extend his rookie contract approaches (October 31st). Utah didn't reach an agreement with Gordon Hayward, and for the most part they knew what he was capable of. Kanter is a question mark right now, and the Jazz need to see him play more before they can feel comfortable with an actual dollar value. Kanter is at his best when he is motivated, and he is mostly motivated by extrinsic factors. Not getting the money he thinks he deserves from the Jazz will motivate him to really play well this year.

And while the Jazz would love to have him, there is evidence of restricted free agents leaving their draft teams. If Gobert does well this season, the motivation to match a ransom style contract for keep Kanter may be much lower than if Gobert struggles and Kanter's market value is reasonable.

If a third big is needed, for whatever reason, Tomic being a free agent next off-season is key (he has an option for a 2015-16 season with FC Barca). If the Jazz really want him they could make a strong pitch . . . because he fits a need for Utah.

Is Utah fitting a need for him? We're not a threat to make the playoffs, let alone win a ring right now. But if in this 2014-15 season Tomic DOES win a ring with FC Barca, or failing that, the team really sucks and they don't even get to the finals in Spain, he may want out. If the team does the same he may want to stay. That's just an idea, though. So he may be ready to go to the NBA, but that does not really mean he wants to come and be a part of our rebuild.

Though, it should be noted that while current contenders do contend, the Jazz are going to be up and coming -- and other teams, more established ones, will be on their way down. If the Jazz can hammer that point it could go a certain distance with his camp.

You'd still need more though. I dunno, maybe if the Jazz drafted Mario Hezonja this year that could help (another Croatian dude from the same hometown as Tomic, who has ALSO played the last few years with FC Barcelona . . . )

In about two weeks Jazz fans are going to see much more of Tomic than they normally ever would have. We may find something to like. Other teams may as well. And if the Jazz have to make a big decision on their bigs in a year, Tomic is surely going to factor in. He could be here in a year, with little trouble. For us fans he's finally not going to be out of sight. This next season and the dynamic between Enes Kanter and Rudy Gobert will really shape what the team does with Tomic. So add this to your Google calendar to watch all season long.