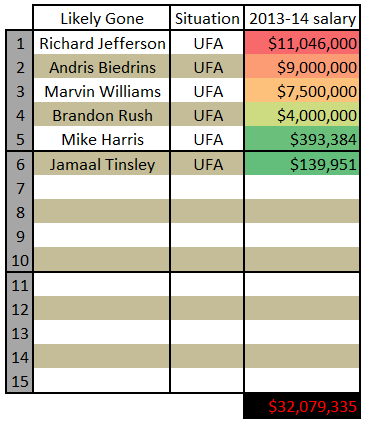 These are all of the unrestricted free agents (UFAs) on the roster that have just had the last year of their contracts fulfilled our bought out. From talking with national sources (not local ones) the information they gave me suggested that these players are all unlikely to resign with the team. I don't know how much I believe that, but let's just run with it for now.

Overall the Jazz aren't losing a lot, they are just shedding a lot of salary. This is flexibility that can be used to take ON salary in bad deals. The losses of RJ and Marv leave a big hole at wing that needs to be filled almost immediately. In terms of using any of these guys for a trade to move up in June 26th NBA Draft, well, it can't happen. That said, they are all available for sign and trades on July 1st, except for Harris and Tinsley who were released during the season. Convention suggests that these guys are all gone though, and that we can't count on them being on the team next year. Fly little birdies, fly!