Essentially, you can't trade a bird in the bush, only a bird in the hand. And I want to help educate people on what birds the Jazz still need to figure out about. 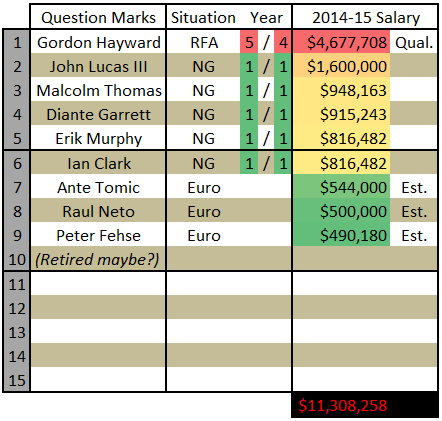 Essentially the fate of the Jazz may rely upon these 9 players -- both in the short term and the long term. Also this group displays the most non-Biedrins income inequality of any. Depending on what the front office decides all of none of them will be with the team next year, and every combination in-between.

The three European players (well, two Europeans, and one South American playing in Europe) are assets that the Jazz can use to trade up with right now. The players with non-guaranteed contracts are mostly worthless right now. And Hayward can't be touched until July 1st at the earliest. So if your plan for the Jazz this draft involves moving Gordon go back to the drawing board.