A heart to heart from a Marvin Fan

The Utah Jazz traded away Devin Harris (the only actual NBA starter received from the Deron Williams trade) for Marvin Williams; the once high flying forward was picked #2 in the NBA Draft by the Atlanta Hawks and needed a change of scenery. The idea was that playing in a new offense away from the ball stoppers would open up his game more. Sadly for everyone on this planet, he came to a Jazz team that was intent upon running things through ball stoppers Al Jefferson and Mo Williams. Hope again came for Marvin fans at the prospect of this most recent season -- one where sharing the ball and hopefully a flex offense would return. It did not, and Marvin remained in the box he was slotted for by the since departed coaching staff. One good thing happened, though. He actually got a chance to play power forward (something that did not happen the previous season in Utah). Marvin actually started at power forward for over 75% of the games he played in, during this injury plagued contract year.

Unfortunately he did not perform as Jazz fans are accustomed to see their starting power forwards perform. Call me old fashioned, but I was raised on Karl Malone wrecking teams; then got to watch Carlos Boozer be an efficient 20 and 10 guy; and followed that up with Paul Millsap being a virtual lock for a double double anytime he stepped on the court. The schema we have built about what a power forward is happens to be a good power forward. Is that unfair to both Marvin and the changing dynamics of NBA offenses?

Perhaps, but I don't think so. The Jazz are not running their offense through Marvin, and I am fine with that. So I am not concerned with him scoring 20 a night (Remember his first game in a Jazz uniform though? What a night he had!). But if he is going to continue being a starting power forward for this team, and playing nearly 30 minutes a night I would like to see him help out Derrick Favors (or whomever, Enes Kanter, Rudy Gobert, heck, Ante Tomic's ghost) on the glass.

So what I did was take a look at every single forward who stands between 6'8 and 6'10 (Marvin is 6'9) and started at least 50 games last season. And then, well, I looked at their rebounding numbers. The simple numbers. Things like a per game average. And then I looked at their rebounding rate, as seen in RPM (rebounds per minute). Fair enough, right? This group of players is only 38 strong, and you get the obvious ones like Kevin Love, Zach Randolph, Anthony Davis, Blake Griffin and Tristan Thompson . . . but you also get guys on the other end of the spectrum like Shane Battier, Corey Brewer, Tayshaun Prince, Mike Dunleavy Jr., and Wilson Chandler.

It's a veritable mix of players, and not all of them were playing in contract years (like Marvin), or hurt (like Marvin), or possibly playing out of position (possibly like Marvin). We can make excuses for him, and I know I do as a Marvin supporter. But the evidence suggests that a change is needed. 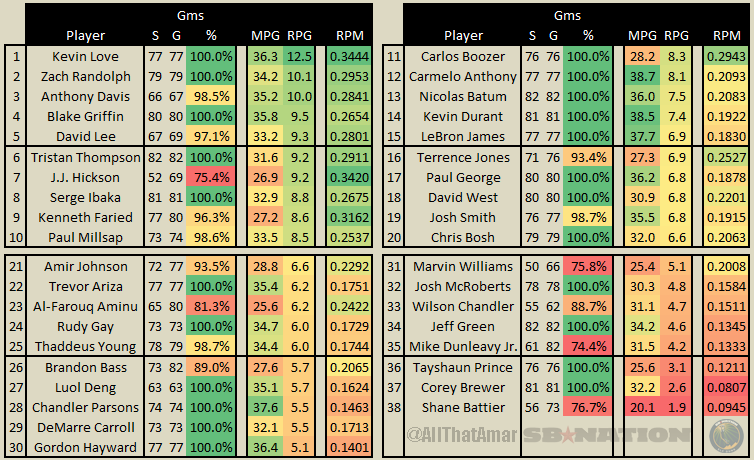 Marvin is in the 4th block of players when it comes to being a starting forward between 6'8-6'10 who rebounds. Two guys who were on the bench BEHIND him last season (DeMarre Carroll and Gordon Hayward) averaged more rebounds per game this year. Marvin didn't kill it. He got about as many rebounds per game as Karl used to get by halftime.

If you move beyond raw numbers and look at the RPM stat Marvin is 20th out of 38. Some of the players ahead of him are not specifically rebounding specialists. After all, I don't think we can call Tristan Thompson, Al-Farouq Aminu, and Nicolas Batum clones of Dennis Rodman or anything. Marvin did finish ahead of Josh Smith, and . . . Jeff Green. So that's two power forwards he was more efficient than. If you couple that with his 31st out of 38 standing in actual on court production then you have a guy starting who isn't rebounding according to his size or his position archetype.

My idea would be to resign Marvin, but play him as one of the first forwards/bigs off the bench. Depending on the situation play him at the SF (and use his size on guys) or the PF (and use his face up skills). I think 'locking in' three SFs as starters last year was not a good move. Especially if it did not pay attention to match ups and advantages. Marvin has advantages over some players, but not all of those players are playing PF. A more dynamic approach to using him would probably help coax some of the last remaining potential he may have after a decade in the league, and numerous injuries.

I am advocating for bringing him back, but just not as the starting power forward. Play him like the Jazz used to play Andrei Kirilenko -- let what's happening on the floor dictate his role during the game, instead of hamstringing him from tip off to have to deal with some of the brutes on this list. That's just me. I'd offer him a two year deal, with a third as a team option: $6,750,000 / $6,500,000 / $ 6,250,000. Add some incentives there for health and rebounds.

Say goodbye to Malcolm Thomas, and have Marvin help along rookie Rodney Hood. You know you want to see UNC and Duke working together. There are a lot of things Marvin has learned through his ups and downs from being a lotto pick to being a guy averaging 5.1 rebounds per game on the worst team in the conference. Who better to mentor Hood? But please, Marvin, you are not a starting power forward in this league right now. At least not while getting out rebounded by your own shooting guard Gordon Hayward.

Thanks to Basketball-Reference for the data on this post.