The Utah Jazz did what we all expected them to do, they matched the contract the Charlotte Hornets offered to Gordon Hayward -- one he signed, by the way. Yahoo! Sports' Woj has the info:

Yeah. I think this is a no-brainer. Especially when you look at the wing crop that remains in free agency it was absolutely necessary for the Jazz to bring back one of their most popular players. Gordon Hayward's contract is going to make him a very rich man. I hope his play on the court will make us very happy fans, and when working in cooperation with the rest of the talent assembled, lead to a bright new era for the franchise.

I really do like Hayward, and I understand that the Jazz are both a) paying market value, and b) overpaying at the same time. Money is funny now-a-days. And yes, he's a max contract player, but that's a max of what he can be payed, not that he is a max contract player in terms of "he is earning the max of what ANY player can be paid." After all, the $14.8 million he'll make is actually only a bit more than the $13.0 million Derrick Favors will make next year. (Their contracts average out to different numbers, but as for next season, not that much of a difference) And both are a far cry away from the $20 million Kobe Bryant makes. 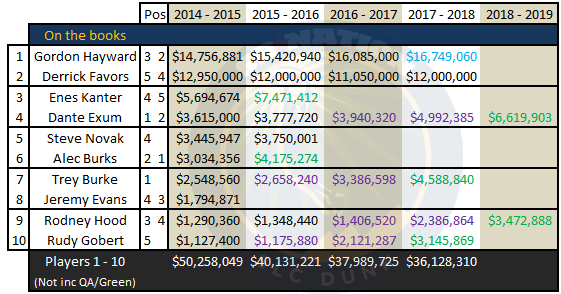 Furthermore, you need max contracts on your roster -- the Jazz had two pretty close to max contracts last season with Richard Jefferson and Andris Biedrins. If you put it into that perspective, I'm much happier paying Hayward and Favors big money -- than those two guys. If we're going to reach the salary cap minimum value you have to open the vault to someone. I'm happy with who we have opened it to. Additionally, you do need max contracts on your roster for another reason: trades. It's easier to make a trade to upgrade your roster without giving away too much in an attempt to match contracts IF you have a big piece to work with from the get go. Hayward is that guy, if we ever feel the need to move him. (And his trade kicker will spring up.)

But aside from money, or off the court stuff (like him holding basketball camps for kids in Utah as a free agent), Hayward is a smart basketball move. Perhaps he was over-taxed with responsibilities last season, but in a smart system the smartest players shine. And few are as qualified to micromanage many moving parts and help orchestrate big wins. He spends his free time playing RTS games, which are some of the most demanding when it comes to quick thinking, quick information processing, and managing many things at once. He's a very smart guy, and I think we will all be very happy to see some of his smart decisions translate onto the court.

And finally, he's a basketball player. He's one of our best players. And one of the most highly regarded players in the current USA Basketball pipeline. He can score, dribble, pass, and defend. He makes his free throws, and he doesn't give up on plays. And he's ours.