Breaking it all down

The Utah Jazz just added their 11th player to the roster in Trevor Booker (initial information and analysis here). As a result, it was necessary to recalculate how much space the Jazz have this season -- and beyond.

We love these guys. These are our guys. And unless they get traded, they are all on the team for the next year so don't burn your jerseys of them. Gordon Hayward and Derrick Favors will be earning a lot of money, and should produce some great numbers this year. Behind them there is a collection of similarly paid players between $3 and 6 million in Enes Kanter, Trevor Booker, Dante Exum, Steve Novak, and Alec Burks. The next tier down are guys on less expensive rookie contracts and, well, a human pogo stick: Trey Burke, Jeremy Evans, Rodney Hood, and Rudy Gobert . 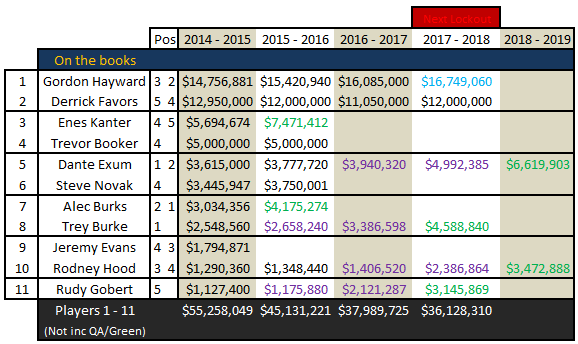 The Jazz are on the books for $55,258,049 -- so if we're aiming for the minimum there isn't a lot of money left. And there are at least 12 slots to fill. Personally, I think the Jazz will start the season with either 13 or 14 guys, picking maybe one up during training camp. So I think aiming for the minimums in both case may be a little daring.

It is more likely that the Jazz will exceed the minimums, but stay within the normal ranges. So, let's look at the range of money available:

Too many numbers, help meee!

So the Jazz can spend between $1.5 million to $7.8 million this off-season still.

What are we working with?

There is concern, now more than ever, that there is roster imbalance. Especially if you look at our last three transactions were to bring in free agent forwards (Steve Novak, Gordon Hayward, and Trevor Booker). I would look at the front court numbers crunch and worry a bit myself. 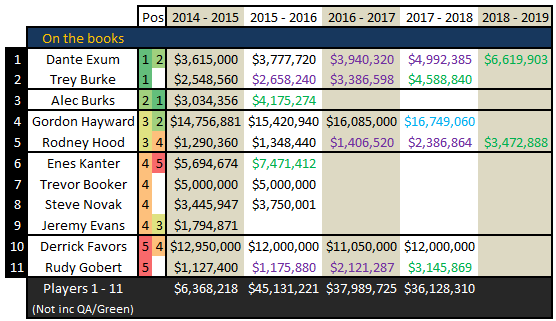 It's clear that the team needs some more guards. Hopefully another PG and another SG.

What's on the table?

The Jazz still have to figure out what to do about John Lucas III, Malcolm Thomas , Erik Murphy, and Ian Clark. Three of those guys are playing for the Jazz right now in the Summer League. Booker's signing means there is even more competition inside, so good lucky to the Murphies. And maybe so long to Thomas too.

Ian Clark can play SG/PG, so he may have an inside track now because he's super cheap. But I'm not sold on him being anything other than the 3rd string SG and 4th string PG. Right now he would be the 2nd string SG and 3rd string PG. I like John Lucas III, he seems like a cool guy to go out and get burgers with, and joke around watching a movie or something on TV. Netflix. Whatever. I think there are better PGs available out there to help steady out team. Dante Exum will hit the rookie wall. Trey Burke isn't killing it right now either. Someone will have to take control of the team during those times, and I'd rather go with Chauncey Billups than John Lucas at this point. If that makes me a bad guy, then that's me. The Jazz do have $7.8m to spent. Clark will only cost that $0.8. So you do the math.

The Jazz are running out of roster space and money. The summer league will help identify which players are good (on our team and on others). And the Jazz can poach what they like. There's no immediate rush here to use up all the money and spots. But I do know that Billups is planning on retiring. And that means he doesn't pass on any of his XP to any young kids who may need it.

But I'm kinda biased. I get that. But looking at the roster they really need some guard experience and a steady guy to rely on.