NBA Free Agency 2014: Utah Jazz have a lot of cap space, but how does it break down

Share All sharing options for: NBA Free Agency 2014: Utah Jazz have a lot of cap space, but how does it break down

There are a lot of theories on what to do with cap space. The obvious one is to use it to lure a great player to your team. Another is to package it off in smaller amounts to round out your roster. For a team that is perpetually in the lottery having a lot of cap space is less attractive, and it only seems to look attractive to mercenaries. For the Utah Jazz, a team that at times seems to be maintaining flexibility instead of building forward traction back towards the playoffs, there is plenty of cap space to go around this year.

And plenty of places where they need to spend it on. 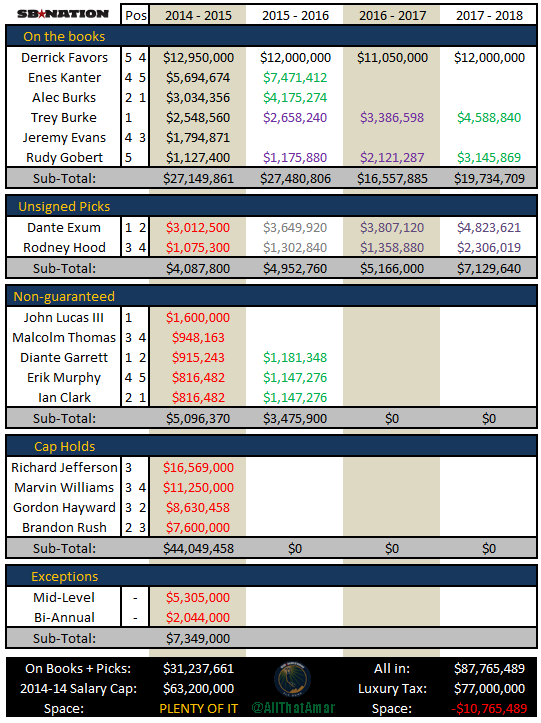 Data taken from Basketball Insiders, Exum and Hood salary extrapolations based off of Alex Len (2013, #5) and Solomon Hill (2013, #23). I am assuming you know what the different colors mean, but here's a quick recap. Black = on the books. Red = Non-Guaranteed. Green = Qualifying offer. Purple = Team Option. N.B. Exum and Hood will have QAs for the 2018-2019 season, that are not shown here.

Derrick Favors, Enes Kanter, Alec Burks, Trey Burke, Jeremy Evans, and Rudy Gobert are all on the books for next season already. And they add up to $27.15 million in salary. That's pretty cheap, and the reason for that is because four of those six players are still on their rookie contracts, and one of the remaining two is a third stringer earning less than $2 this upcoming season.

Unless something crazy happens we can expect the Jazz to sign their two draft picks, Dante Exum and Rodney Hood. This is a no brainer, and adds only another $4.09 million to the books. If you add it up with the players already signed you have the team on the hook for $31.24 million. That's not bad for 8 out of 13 players.

According to Google, the 2014-15 Salary cap is slated to be $63.20 million (it'll go up after that). So the eyeball test tells us that the Jazz have money to spend. Plenty of it.

Utah has five players who have non-guaranteed contracts -- and the media is sending us all these vibes about how important John Lucas III is, so it is safe to assume that he could be coming back. Diante Garrett is a better, more useful player, but he's younger. So, old habits die hard. Garrett will participate in the Las Vegas Summer League for the Utah Jazz, and do so along the other three players with non-guaranteed contracts: Malcolm Thomas, Erik Murphy, and Ian Clark. By the end of summer league the team will have a better idea on who to keep and who to kick to the curb.

But all of that could be a moot point because RIT NAO the team is probably talking to agents about what to do with all of the money they have under the cap. The Jazz do have two exceptions this year, the mid-level and bi-annual, but as far as I know, those are only useful IF you are over the cap. If the Jazz go all in and max their cap I think these two become available. As it stands right now, I do not think they are.

The available money you have is influenced by the holds certain contracts have on your cap. Right now the Jazz have four sizable cap holds in the theory of signing Richard Jefferson, Marvin Williams, Brandon Rush, and our very own precious, Gordon Hayward. It's insane to believe that the Jazz are going to bring many of those guys back. Even Marvin, whom I like, may skip out on the Jazz for a better offer / team / role / chance to win elsewhere. (And let's be real, there are some teams that can offer some of those things.) Hayward is the prize here and should be the beneficiary of the team having money to use, and just how ridiculously silly GMs are handling things so far this free agency period. He's going to get paid.

Even if he gets paid stupid money, and the Jazz bring back some non-guaranteed guys the team will still be way under the cap. Probably enough to give Anthony Morrow a $10 million contract. You know, because why not?

That's very unlikely to happen, but it is likely that the Jazz are going to be under the cap for a number of weeks this summer. At least now you know how the money breaks down.

If there are any clarifications, questions, or comments, I ask you to direct them to Peter. He actually knows things. I'm just some dude.