Carrick Felix was almost a 1st round draft pick, but after a forgettable rookie year a change of scenery couldn't have come at a better time.

Two years ago Arizona St. shooting guard Carrick Felix was an early entry candidate for the 2013 NBA Draft. After a junior season that had him emerge as a leader on a Sun Devil's team that also featured Jahii Carson, Jordan Bachynski, and Evan Gordon, he was invited to the NBA Draft Combine. Mychal and I were there, and I'm not going to revise my opinions of what I saw of him, historically or not. He did not wow me. Part of that was influenced by his on court production with Arizona St, where he played in 35 games, and averaged 14.6 ppg and 8.1 rpg. As a wing player these were very impressive numbers. Yes, yes, Felix also passed the ball, made threes, and got to the line -- but these were things that are harder to observe within the strict drills at the Harrison St. Athletic Facility. (Formerly Attack Athletics)

Those drills are unusual because they are not the drills NCAA players do at all. They aren't even NBA drills. They are drills that isolate specific things scouts and front offices want to see. Hustle is always appreciated, and defensive players can stand out. But what Mychal and I saw back in 2013 was that a hot shooting guy having a good day will make the biggest splashes. One guy who did exactly that was Tony Snell, and he followed that up with a "see, it wasn't just a fluke" season with the Chicago Bulls.

Snell was taken 20th. And thirteen spots later Carrick Felix was picked by the Cleveland Cavaliers.

When you do well in the NCAAs, get invited to the combine (not everyone who gets picked does), and you do well enough to get drafted you have done one thing consistently over your entire life: you have shown that you can play.

So what happened with Felix in his rookie year? Well, the second rounder did not get a chance to show much of anything. On a team that played Jarrett Jack, Dion Waiters, Luol Deng, Matthew Dellavedova, Alonzo Gee, C.J. Miles, Earl Clark, and fellow rookie Sergey Karasev at the wing there just weren't a lot of minutes to be had. Carrick played in only 7 games, and clocked in at 38 total minutes. That ranked him at #64 out of #78 total rookies last year. How do I explain how little he played? Well, Erik Murphy played nearly double the minutes last season. That good enough for yet?

Today on twitter I saw some people claim to have watched him a lot last season (non-Cleveland market people, mind you), and liked what they saw. There was only 38 minutes of Carrick last season at the NBA level. I'm not calling you a liar. But . . . it's not like you watched him in the NBA DL either. Carrick was sent down / called up to Cleveland five times between December 5th and January 26th. He played in 9 total games there.

So 7 NBA games, and 9 NBA-DL games. And that's after being an NCAA junior ready to help and NBA team, a guy who played 1,303 minutes before for the Sun Devils.

His stats aren't impressive, and duh, you aren't accumulating a lot of stats if you aren't playing in games.

He just didn't get to play.

In Utah he may finally get is chance.

Because he went to the Combine I just had to add him to my spreadsheet of Jazz players so I could compare him. Here are some point form highlights (because it's 1 am):

Because the advanced stats are based off of actual on-court production, they are not of much help. He had a PER of 13.3, a USG% of 23.2, a DRTG of 112, and was involved with dishing and getting defensive rebounds. Sounds like a guy we like, right? What does Synergy say?

They don't say many good things. Offensively he is forgettable. He was involved in only 20 offensive possessions where what happened actually happened because of something he did with the ball in a 'scoring way'. He was useful in transition but not as a spot up shooter in transition. He was also not a really good spot up shooter in non-transition methods. He did manage to score on 45% of his possessions, but turned it over on 20% of them. He somehow found a way to turn the ball over on offense 40% of the time ON SPOT UP JUMPER ATTEMPTS.

I had to re-watch all of these to see what happened. 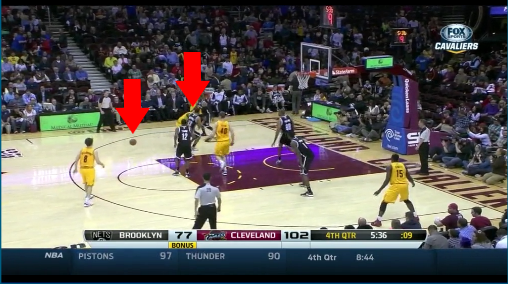 Thanks to Synergy Sports!

There's no good way to break this down. You can see where the ball is, and where Carrick is. He started that play off catching the ball where it was. The play did not end well for him. I'm not going to kill him, but this wasn't his only turn over in a spot up attempt. Again, this type of thing happens 40% of the time on spot ups. Small sample size for sure, dude played in only 7 NBA games. But the common thread here seems to be that he's not that great at dribbling into traffic. Of course, the "normal" thing to do would be to shoot a spot up jumper. But I guess he's not too confident in that either at this stage in his so-called career.

Seriously, you can't make grand proclamations on fewer than 60 games, and Carrick played such a small fraction of that.

He was much more useful in transition, as most players are. But in his seven transition attempts he did look very dangerous. He had a turn over, and took a bad shot against the Spurs (is that even something? everyone does), but did go 2/3 on layups and had a nice dunk. He can elevate and seems to have that "glide" ability where he can start his layup or dunk attempt from much farther out than normal humans. So that's good. He is good in the air as well, as he is able to complete plays -- even with contact -- without first needing to catch the ball, land, then go up again.

If Carrick is going to play for the Jazz, though, he's going to have to show something on defense. And on defense his man only scores 38.5% of the time on him. He does force the guy into a turn over over 15% of the time -- which zooms all the way up to 33% of the time when defending the pick and roll ball handler. He was a little slow following a man around off the ball, and gave up a number of threes -- but that could just mean he is Jazz player material after all.

I was impressed with his ability to also defend the post. He's short, and not that athletic. But he doesn't give up easy.

And that's something I did see at the Draft Combine, even if other guys were just flat out making shots over him because they were 'hot' at the right time.

And speaking about Carrick, right now being in Utah could be his time. Or at the very least, he looks to get some playing time -- something that eluded him in Cleveland. Felix and this trade may be but a foot-note in the Cleveland / Kevin Love chase, but for a guy like Carrick it's a chance to finally get back on the court and prove that he belongs here.