The Jazz have 12 men on roster for next season. The cap space is still there, and Dennis Lindsey is not quite done yet. So what's up next?

The Utah Jazz are not quite capped out, but they do have less than $7 million to play with if they want. (Full Cap breakdown here). There are 12 men on the roster. The NBA Draft brought in Dante Exum and Rodney Hood (Breakdown by Clark here, and The Shums here). NBA Free agency brought in Trevor Booker. (Breakdown here) And in trades, Jazz GM Dennis Lindsey brought in Steve Novak (click it), and Carrick Felix (click it good). Oh, and the team matched the offer for Gordon Hayward too (the straight dope here). Those six guys will be tagging up with Derrick Favors, Enes Kanter, Alec Burks, Trey Burke, Jeremy Evans, and Rudy Gobert. That's our dirty dozen for 2014-15 right now.

This fan made trailer has a lot of shooting in it

But the rules state that the Jazz need 13. So what's left? Well, they need to find that 13th Warrior, and by the LOOKS OF IT, it should be Ian Clark.

But does adding Clark, making the minimums for salary and roster spots make this team a complete team? By my count, not quite. Well, not quite -- unless we count Ian Clark as a primary ball handler, and Jeremy Evans as a wing man. Clark is just a short shooting guard who can dribble a bit. Evans has never played small forward regularly at the NBA level who has taken 5 three pointers in four seasons, and missed all of them.

Anyhoo, here's my new update on the roster rotation AFTER the Las Vegas Summer League (Dante Exum looks like he can't play a ton of minutes right now, Rodney Hood shows his value on the court, and Rudy Gobert is ready for the prime time). I've had to come to terms with the fact that whatever Steve Novak does is worse than whatever Hood can do. Novak is more consistent, but horrible at everything else. And I can see NO reason to play Novak ahead of Hood unless Hood is shooting 1/11 from outside. 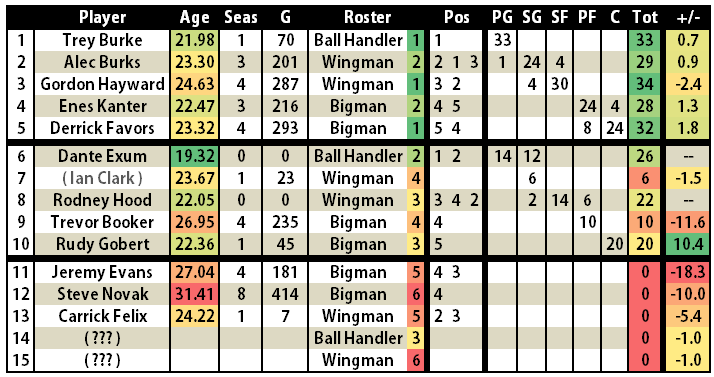 Sadly, I've had to cut Jeremy Evans ' minutes as well. Unless he can be a SF, and hit threes, he is in a crowded front court, where everyone ahead of him is already a better defender and rebounder.

Because only dumb teams or teams getting blown out regularly play a rotation of more than 10 people. Furthermore, no team goes 6 deep with their bigs in any given game. If you sort by roster slot, you get this: 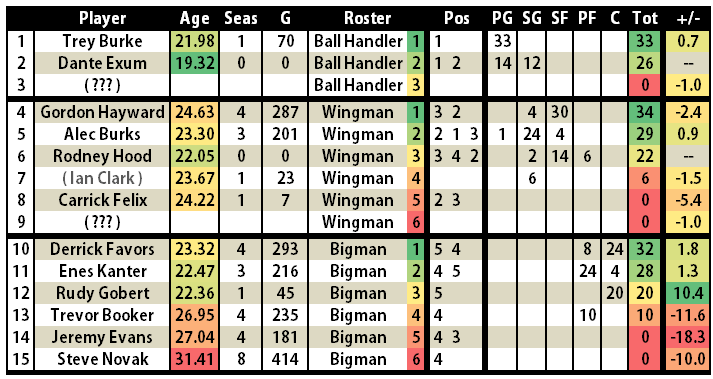 Fun? I have Burks in there at PG for one min, I am thinking at the end of a close game because he's the only real defender we have right now -- a guy going into his 4th year vs. either a rookie or a shortie . . . I'd take him for PG defense right now. I do think Hood can play three positions, and he gets some burn as a stretch four here. If Marvin Williams can start there all season long, then Hood can play 6 minutes. And Hood being the stretch four makes Novak just insurance. I don't see Carrick Felix being useful here, and would put Ian Clark ahead of him on the depth chart -- and he's not even going to get a lot of playing time either.

For the bigs, well, I don't think there's much room here. Evans, Novak, and Booker can ONLY play PF. There's no reason why Favors and Kanter shouldn't be playing 32 of the 48 minutes there though. So, you do the math. Or more precisely, I did it for you. So there just isn't enough minutes for everyone on any given night.

So where does this get us? If you're looking for young guys to play 2,000 minutes six players can do so with this revised plan. Gordon Hayward would have to play 58.82 games, Trey Burke 60.61 games, Derrick Favors 62.50 games, Alec Burks 68.97 games, Enes Kanter 71.43 games, and Dante Exum 76.92 games. Rodney Hood would require 90.91 games to reach that 2k threshold. But it's hard to get him more minutes. He's close, and will be a little behind on his development after one year. Rudy Gobert will be the next closest guy, but require 100 games to reach 2,000 minutes. So, unless we go on a big playoff run, he'll have to settle for 1.6k in his second season.

Where did I mess up? Hit me up in the comments section!