Is this real life?

Yesterday a number of sources suggested that Kent Bazemore has a number of potential suitors. The 25 year old guard is apparently garnering interest from the Atlanta Hawks, San Antonio Spurs, Phoenix Suns, Boston Celtics, Dallas Mavericks, Philadelphia 76ers, and the Utah Jazz. Since when are guys from that awful last season of the Los Angeles Lakers so important? Oh wait, Jodie Meeks just got paid too. Anyway, back to Kent. This rumor has legs. No. I mean it. Even super-kid Alex Kennedy said it:

Yikes. If you want to win there are a few teams right off the bat that you'd eliminate. But if you want to play and have a big role it's hard not to see the chaos in Boston and Utah and see a ladder.

Why would the Utah Jazz be interested in Bazemore? Well. I spent a several hours last night at Basketball Reference, 82Games, and watching Synergy scouting videos to find out. Bazemore isn't horrible. A huge part of this is recency bias, because after the trade deadline Kent actually started 15 of the last 23 games for the Los Angeles Lakers last season. He played 643 minutes with them in 23 games (28.0 mpg), which was far more than his entire rookie season (267) and all the minutes he played before the trade deadline (268). Of course, these are meaningless minutes with the Lakers because they were not playoff competitive, in Jazz-speak. But yes, he played a lot, and it's hard not to contribute when you are on the floor. You almost have to make an effort not do end up doing some good things out there.

The second year player is, if nothing else at this level, a capable three point shooter. He has a smooth left handed release and a penchant for hitting spot up jumpers, without actually needing to be open. For his career he's making 32.7% from outside, and his recency bias season finish with the Lakers had him up to 37.1%. On spot ups he ended up making 48.5% of his threes. Seriously. That's a very high number. In Golden State that number was only 22.2%, and the year before in Golden State it was only 14.3%.

So with the Lakers, and their style of play, or maybe his confidence from finally being on the floor, he became a significant outside threat.

The Utah Jazz are likely to lose both Richard Jefferson and Marvin Williams in free agency this season, and they were the only two consistent outside shooters all season long. So there is an obvious need for one. The Jazz did draft Rodney Hood, but it's not like he's going to be hitting 40% from day one. Bazemore is someone who can make the shots no one else on our roster seemingly can make. Specifically the quick trigger, end of the shot clock three pointer. These are back breakers if your team is winning a close game. And the lefty made a lot of those shots in the final 20 games for the Lakers -- the only difference was that his team was already down by a billion points at that point.

The other huge benefit is that Bazemore is physically a beast. He's only 6'5 but has 6'11.5" wingspan. 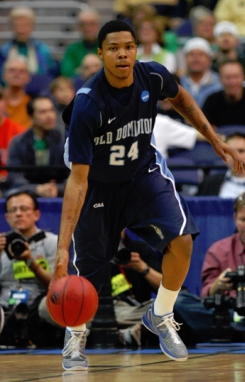 Look at dis dude, dribbling at his ankle!

His 30.8" vertical isn't great, but when your arms are as long as an air craft carrier it doesn't matter. This allows him to get contested shots off quite easily. It should also translate to be a defender. In his rookie year and time in Golden State in his second year this was not specifically the case. (It was back when he was in college though) With the Lakers he really took off, according to the metrics. Small sample size, but he was one of the best pick and roll defenders out there, and ranked #148 overall in the league on defensive Points per Possession. (Of course, this is just for his Lakers time, his rankings for his time this same year in GSW was in the 400s) He doesn't close out well (a surprise with someone with a 7' wingspan), but is adequate when posted up upon.

So in theory Bazemore is a guy who can make tough shots in LA when the score is out of reach, and is an okay defender who could be really good at it. But he's only done it in a sample size of 20ish games, compared to the other 1.5 years of his career. He could be a 3 and D guy, and that's why so many teams, including the Spurs, are interested in him.

The Jazz can offer him playing time and a larger role -- because I don't see him starting anywhere out of these clubs save for maybe Philly and Boston. Also, the Jazz have already talked with his people, and everyone seems to be talking nicely at this point.

He has yet to prove he can do any of this stuff consistently. Maybe this is because he didn't get a chance to do so before, or maybe this is just a hot streak. We don't know. Teams need to find out before they show him the money.

Also, other teams that seem to be more fun want him too, and everyone has cap space this year so what we have doesn't mean much.

And lastly, there are only 48 minutes in a game, and 96 minutes per game for a guard spot. This upcoming season Trey Burke, Alec Burks, and Dante Exum all need to play a lot of minutes. If Gordon Hayward is here, he will need some time as well, and dip into that SG minutes pool. Dare I say it, we will also have to play one or two of John Lucas III, Diante Garrett, and Ian Clark some minutes too. Bazemore is an upgrade over some of these guys, but not all of them. And he probably sees that too. Utah does not have the guard minutes budget to play him the minutes he got last season (28 mpg), and can't try to develop four guards at once.

I'd rather roll the dice on making Trey, Alec, and Dante better than bringing in a castaway from the Lakers and Warriors who has only played good basketball at this level for 20 games.

Bazemore may be the real deal, and that means other teams will go harder for him than the Jazz will. He may also not be the real deal, meaning we won't be interested. The Jazz have a ton of inexperienced guards already, and there is a minutes crunch. He is an interesting player for sure, and has the potential to be a 3 and D guy. Those guys help stars win rings. As it stands, his agent Austin Walton isn't big enough to be someone we have to play nice with. If the Jazz are going to offer him a contract, they will not have to break the bank for it. As a result, I can see him signing with someone else.