Things happened, and I learned . . . like Antonio Banderas in "The 13th Warrior."

So, in the wake of the epic Steve Novak / Diante Garrett trade -- truly the impact of this trade will resonate for an age -- the Utah Jazz salary cap situation needs to be updated. A lot of things beyond that trade have happened since my last post on the subject (here). I received a lot of help for this post, so please excuse the rant at the end, which is basically like my acceptance speech at some award show.

In order to shore up their roster for the next season every team needs to meet two minimums. The first is that they need to have 13 players on the roster. The second is that they need to reach 90% of the upcoming year's Salary Cap value by the end of the season. The cap is set at $63.2 million, and 90% of that is $56.9 million. ($56,880,000 for you crazy people out there) Right now the Jazz have seven players under contract: Derrick Favors, Enes Kanter, Steve Novak, Alec Burks, Trey Burke, Jeremy Evans, and Rudy Gobert. If you include the two first round draft picks, Dante Exum and Rodney Hood, this takes the Jazz up to 9 players. The hope then is to also, by hook or by crook, get Gordon Hayward to return. He has been a huge part of our team the last four seasons and we can afford to add him -- at any cost. If we assume to have a Hayward returning then we're at 10 -- and would need three more players.

According to my roster balance theory (some of it can be found here) I think that a team needs four guys who can be a full time ball handler, five full time bigmen, and six wing players on a 15 man roster. Sure, today we are moving away from positions, and there is some overlap with player skills, but having that insurance isn't a bad thing. If we are going for a 13 man roster that reduces to 3 ball handlers / 5 wings / 5 bigs. It is essential to have depth if your big minute players are younger guys who can, and will, be inconsistent and have bad games.

If Utah does sign the two rooks, and brings Gordon back the team will be at (by my count): 2 ball handlers, 3 wings, and 5 bigmen. It's clear where the obvious hole is. If we continue to use my balance theory the team would need to add one more full-time ball handler, and two more wings. I feel like the Jazz will try to fill these three empty spots with at least two wings, somewhat agreeing with my balance theory. They may do it through trades / salary dumps, and not just on the free agent market.

But as it stands, how much can they spend? Let's break it all down.

This is how much money the team is spending on the current guys on the books. It adds up to $30,595,808 -- with the vast majority of that going to Derrick Favors. Enes Kanter is the next biggest fish, but after that everyone is under $3.5 million -- it's funny to me that Steve Novak is going to make more money than Alec Burks this next season.

If you wish to add the two rookies, you have to add what their contracts are going to be. Previously I estimated this on my own based off of the values from the previous season and then modifying it by my understanding of the BRI% change from year to year. As you can tell, this is well beyond my training as I've never even taken an accounting class in my life. Thankfully, this information is available online. Furthermore, I was informed that the convention is to pay the maximum 120% for this base value per year. My numbers for the rookies are the 2014-15 rookie scales for their positions (#5 and #23) and at the 120% value. 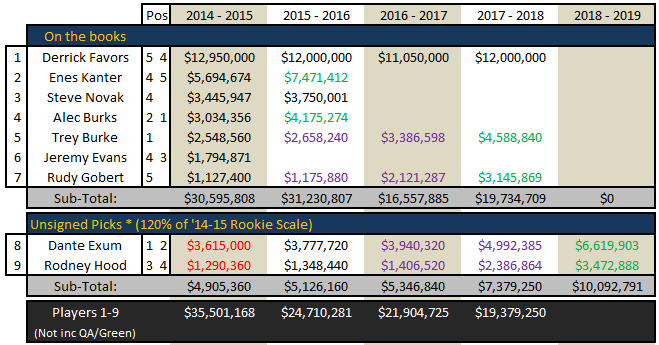 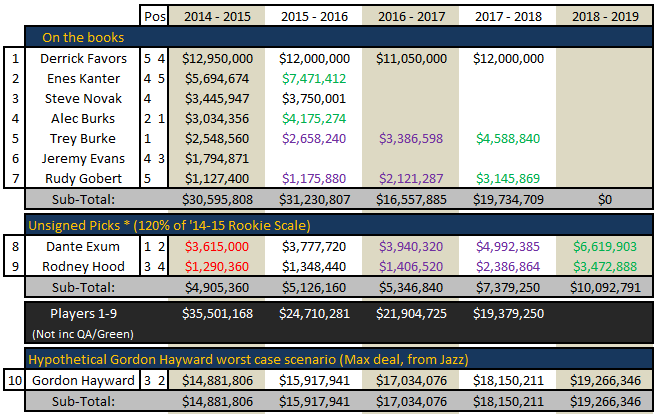 This is where we assume the Jazz get Gordon Hayward back. He's going to make a lot of money. The most he can make (and thus, the standard we're using here for this exercise) would be a max contract from the Jazz -- and that comes out to $14,881,806 according to Peter. It is likely that the Jazz will match a smaller value for Hayward than that, but this is the worst case scenario (in terms of how much cap space it takes). But in the case that it's $14.9 million -- then the grand total for our team is $50,382,974. 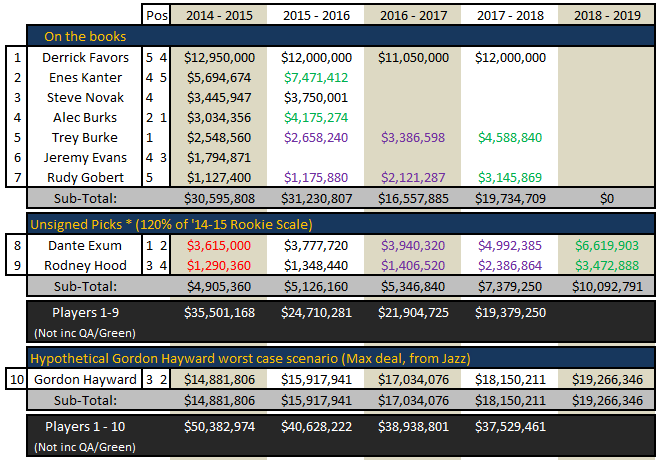 Now if you look at the 10 players "under contract" the Jazz are at that stage where they need those three other dudes. How much money is left? Well, that depends. It depends on if you are aiming to hit 90% of the cap, or all of it. The above value of $50.4 is approximately 79.7% of the full cap, and 88.6% of the 90% value minimum.

I would feel as though this much money is enough to land the Jazz someone off the free agent market like Kent Bazemore , and bringing back some of our non-guaranteed contracts in John Lucas III ($1.6 m), Malcolm Thomas ($0.9 m), Erik Murphy ($0.8 m), or Ian Clark ($0.8 m). Utah can fill up their roster spots and pay people -- but if they do elect to go with two or more of these bottom barrel players, the other piece they bring in is still going to have to be making at least $3,948,863 next season. (This number taken from 90% cap target minus John Lucas III and Malcolm Thomas ' non-guaranted contract cap values)

Can ya get Bazemore for $4 million a year? Probably not. So the Jazz will either a) end up surpassing the 90% minimum value target, or b) make a trade for a salary dump, or c) both. And let's not forget, d) these values are based upon the Jazz giving Hayward the most money he can possibly get. In reality, there will be a trickle down effect of savings, as Hayward gets less (maybe), and there is more money to be had at this level.

Personally, I don't think the Jazz are in a hurry to go over the cap. So that 90 - 99% zone for the cap seems to be where they will land. By doing so they still have enough money to play around with to fill out the roster -- $6.5 to $12.8 million to be exact. The huge worry was reaching that 100% cap value, but thankfully that does not have to be the goal for the team's bean counters.

The Jazz could over-pay for Marvin Williams and some other vets to fill in the gaps, but I think they would rather under-pay for vets with lower aspirations. I would still love to see a Chauncey Billups or Earl Watson type here instead of John Lucas III -- but we can't always get what we want.

What we do know is that Utah can make it out of this free agency period with a full roster and money saved. I do predict they will leave one roster spot open in order to facilitate a trade if they need to make one (so our max is now 14 out of 15), and that there could be a chance a guy makes the team during training camp (putting our team at 14 out of 14 players by the time the season starts).

When I write here at SLC Dunk I do it for my own happiness and for the chance to bring the best content I can to the people who love the same team that I do. I was an international Jazz fan like thousands of others, and my access to the team was so small that I would gobble up whatever morsel I could get. Now that I live in America, and have high speed internet, NBA TV, NBA League Pass, and actually get to interact with "jazz people" I feel like I owe it to fans who were in my spot to give them the best I can give.

This isn't about fame, or trying to look like some bigwig. For me it's about giving back. And in order to do the best I can I need to make sure my information is as accurate as possible.

So the following information is as correct as possible for now, but I am always willing to learn and correct whatever mistakes I make. My ego isn't such that I need to fight anyone who thinks they know more than me, nor is my standard reaction to be upset if someone thinks I am wrong. I am okay with being wrong, and being told so. That's how I learn. That's how I improve. It's a healthy process. So if there are errors here, please bring that up to my attention. As for this info, I would specifically like to thank the people who have helped me get the info as correct as possible -- Eric Pincus (Basketball Insiders, and other places), Peter J Novak (here, and HansomeJDMag.org), Nuno Sa (JazzDimes.com), and Mykroberts (for the Coon info on future Rookie scales).

You all helped a lot, so thank you. And keep helping me in the future too! : )