Sometimes you need to find out if fantasy can be a possibility.

Share All sharing options for: Utah Jazz roster filled with youth, potential, and potential for competition

The Utah Jazz have a new head coach in Quin Snyder. They finished the season with only six players under contract (Derrick Favors, Enes Kanter, Alec Burks, Trey Burke, Jeremy Evans, and Rudy Gobert), and picked up two more in the NBA Draft (Dante Exum and Rodney Hood). That's nine players total. That's an incomplete team (full roster and salary cap breakdown here). Utah entered Free Agency with a lot of holes to fill, and traded for Steve Novak. And during Free Agency the team has made every indication that they will match any offer for restricted free agent Gordon Hayward. According to the rumors of which players the team has made contact with so far in July it would appear as though the team is interested in supplementing this group with some point guard help and wing depth.

What you can do is work around the unknowns and the knowns and develop a breakdown of the roster, and a potential minutes distribution. Steve Novak wants a bigger role, but according to my analysis, he may not deserve one. Furthermore, I think Dante Exum can be a star, but the road to stardom is going to be tough, the first step is getting on the court a sufficient amount. By now most of you have some working knowledge of my theory that a young player needs 2,000 minutes per season (regular season + playoffs) in their first five seasons to really become something in the league. And instead of just harping about minutes all the time, it's more constructive to see if the minutes desired can match the minutes available.

The good news is that, well, they can. 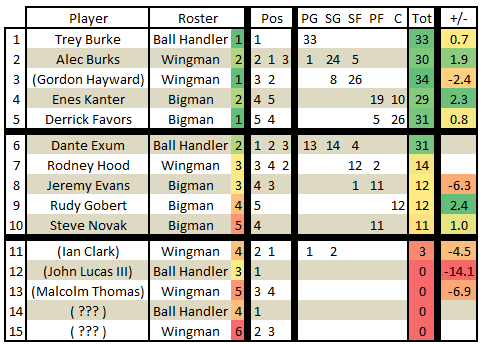 This abstraction of a regular, non-Overtime game has some interesting parts to it. First of all, it over-emphasizes situational advantages. I think on key possessions down the stretch I'd want Alec Burks defending other point guards, and not Trey Burke or Dante Exum. Similarly, I did throw token minutes to Ian Clark because I figured someone would get in foul trouble. Similarly, I have Jeremy Evans taking in some time at SF -- I am sure he can handle playing a bit of it at the end of either the 2nd or 3rd quarter as a distraction or to D-up one of their players. The major "wait, whut?" issue is playing Dante at three positions during the course of a game. It's not that crazy. Essentially he's playing point guard, but at three positions. When at PG he's playing PG normally. When at SG, he's a PG in a two PG line up. When at SF, he's got a huge speed and quickness advantage as a penetrating point forward. It makes sense when you look back at the three-guard line ups that Tyrone Corbin stumbled upon two seasons ago and quickly forgot about.

Bottom line, all the young guys play. Most of the young guys play more minutes than last year. And I still find 45 MPG for our rookies. It's a young oriented minutes distribution. And it's not likely one many coaches would go with. Snyder is all about development, and understands his job here. We may not get to see Dante for over 30 a game, or so many of our main guys playing big minutes. But as for July 7th, this is what I have.