What would you do with Ian Clark?

Today the Utah Jazz need to figure out what they are going to do with combo guard Ian Clark. Clark is the last remaining player on the team (not on the books) who has a non-guaranteed contract. At the beginning of the summer there were many more, but since then John Lucas III, Erik Murphy, Malcolm Thomas, and Diante Garrett have all been traded away. Clark remains, and will be going on a community service trip in remote locations to teach basketball camps at the behest of the Utah Jazz and the Jr. Jazz program. (Currently Jeremy Evans is on that trip right now.) Other players have gone on that trip before as free agents, and did not return to the Jazz the next season. The most notable player was fan favorite Dee Brown. That was a few seasons ago, and there is new management in town. 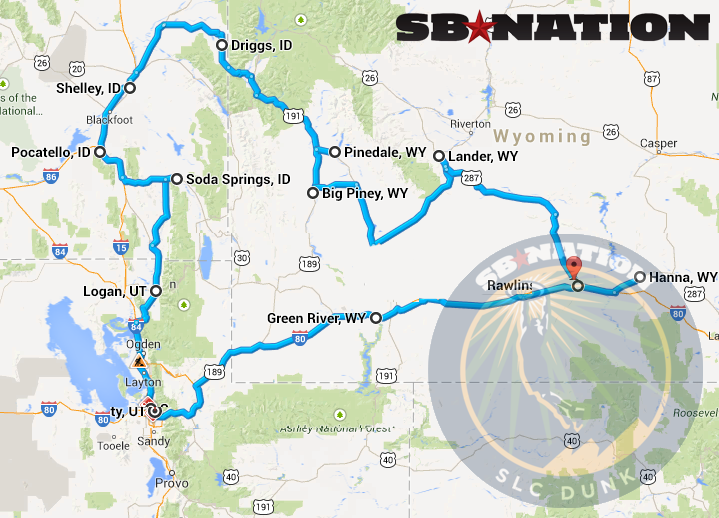 Dennis Lindsey, the Jazz GM, needs to decide by TODAY, else his non-guaranteed contract becomes guaranteed. It's only a one year deal worth a whopping sum of $816,482. That's a lot of money for you and I, but not a lot for the Jazz who still need to reach both the salary minimums and roster minimums set for this upcoming 2014-15 season. If the Jazz do elect to keep Clark around they could offer him an actual contract, or just guaranteed this one. He will then become a free agent next off-season, and his qualifying offer would start at $1,147,276.

You may recall the Jazz locked up Jeremy Evans, a second rounder, for a longer term deal than the market would have given him -- and in doing so locked him into a small-ish per season value. I don't know if they will do something similar next off-season. I guess a lot depends on what happens this season.

And really, this season is so necessary because there was almost zero data from Clark LAST season. After being a four year player at Belmont he played in both the Orlando and Vegas Summer League as an undrafted player. Then, after being signed by the Jazz, sat on the bench all season, and the token minutes he played in the NBA-DL showed that he was an NBA level talent. When he returned he sat on the bench some more. This year in summer league he did not show that he was a worse player, but he did not show that he actually got better in one calendar year.

I have no doubt that he worked on his game all year long, but doing something by yourself after practice does not simulate actual in-game experience.

So here we have to make a decision on a player today without a lot of data to crunch over.

What do we have? We do know that in the last 40 years there have been 110 players 6'4 and shorter who played at least 10 games in the NBA in their rookie seasons, but fewer than 200 minutes. Most are names you will not know. I did cherry pick a few, and by chance half of them played more than Clark, and half played fewer.

This indicates that fewer than 20% of these low experience rookies become actual NBA rotation players (or failing that, hang on to NBA rosters). Some become quite okay, many remain on rosters with obvious warts to their games. But that's fine. You have a 20% (ish) (it's actually 18%) chance of getting a guy who can rise above his inexperience to help a team. Most of these guys are overt 3rd stringers. Some climb higher. Very few become starters.

On a team with Trey Burke, Dante Exum, Alec Burks, and Gordon Hayward I don't think we need someone like Ian Clark to become a starter. And we know with those four guys ahead of him at the PG and SG spots it's clear he's not going to get a lot of minutes. So the lower potential isn't something to worry about.

But for less than a $1 million it is almost criminal to give up so soon on a young guy who:

He is built to have the ball in his hand, though, and is one of six guys on the Jazz who will help them be more dangerous this season on offense. Furthermore, I think his upper level right now is to develop into a Jason Terry / J.J. Barea / Leandro Barbosa type. If he had more opportunity maybe even a Sam Cassell type of guard. I think his trajectory is going to make him fall short of most if not all of those four player types. And that's fine.

I'm obviously a little biased in favor of a guy who averaged 3.0 ppg in the NBA while shooting .388 FG%.

Does it blow you away? No.

Should it blow Dennis Lindsey away? No.

But look at the savings! To me this is a no brainer. And as a guy without a brain, it's easy to say that.

You are all smart, funny, attractive people. So you tell me; "What would you do?"