You all knew this one was coming!

The Utah Jazz have been very busy over the last few months. They drafted Dante Exum and Rodney Hood (posts here and here). They traded away Diante Garrett for Steve Novak (post here). They traded away John Lucas III, Malcolm Thomas, and Erik Murphy for Carrick Felix (post here). They matched the offer sheet for Gordon Hayward (post here). Signed Trevor Booker as an unrestricted free agent (post here). And just recently guaranteed the second year of Ian Clark 's contract (post here). The team also collected a bunch of future draft picks in the process as well (post here). If you add the six other players already on the books (Derrick Favors, Enes Kanter, Alec Burks, Trey Burke, Jeremy Evans, and Rudy Gobert) you have our team for 2014-15.

So are the busy Utah Jazz done for the summer? Did they meet the minimum requirements? Is there still money in the Banana Stand? Let's take a look. 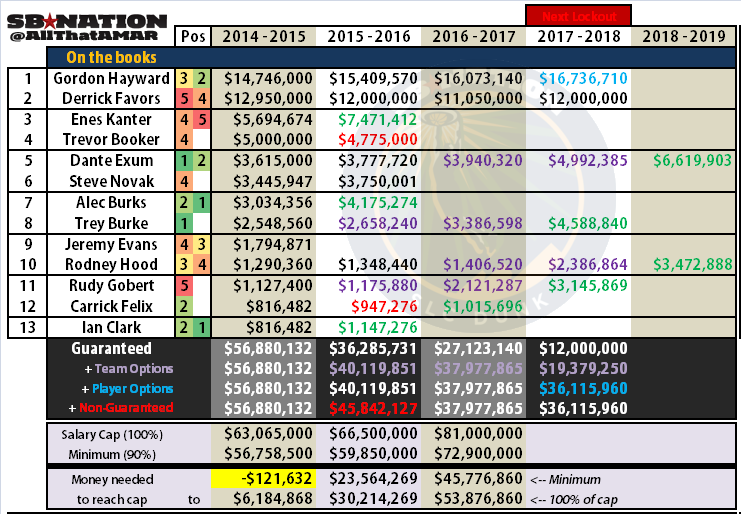 So with this expanded look-see we can tell a few things right off the bat. The first is that, well, some dudes are getting paid. More reasonably, the Jazz have a) reached that 13 man minimum roster threshold, and b) they also have committed the minimum roster salary that they needed to do. (Jazz are safely between 90% and 100% of the Salary cap right now, Ian Clark 's contract pushing them into that zone with $121,632 to spare)

As a result the Jazz do not need to do anything. And there is a good reason NOT to do anything because all those green numbers are qualifying offers. That's the minimum the Jazz will have to pay to keep those players. Enes Kanter, Alec Burks, and Clark are up for raises anytime between now and 11 months from now. The year after that Carrick Felix will be up. The next year, potentially the next lockout year, the Jazz will have to find money for Trey Burke and Rudy Gobert. And then in the last year there will be a need to pay Dante Exum and Rodney Hood. So, there's a good reason not to go break the bank right now.

The contrasting point of view is that, well, only a fraction of Booker's 2nd year is guaranteed, and Felix can be jettisoned if need be next off-season as well. They can make space if they have to. But the main point is that for this off-season they do not.

STILL THOUGH, if they wanted to spend a little more money they could -- there's $6,184,868 left that they could spend before hitting 100% of the Salary Cap. I don't think that the Miller family needs to spend 100% of the cap on a lotto team, mind you.

There is the idea that one of the training camp invitees will perform well enough to make the team, like Brock Motum did. Furthermore, you never know what is going to happen during preseason. The team may need to get another player asap because of (knock on wood) an emergency.

For now I am happy with this roster. It could look a lot different in a year. But this one is filled with promise and it's clear Utah Jazz fans are ready for this next chapter.