Will any of these teams make a move? One of them probably should. But another one definitely will.

The Atlantic Division is home to some of the biggest market teams, and historically some of the largest salaries as well. This is not the case this season as none of the teams are paying the luxury tax. Furthermore, only the Brooklyn Nets appear to have completely mismanaged their cap space. The Toronto Raptors, Boston Celtics, and New York Knicks are all within $10 million of the $70 million "suggestion". And the Philadelphia 76ers have space to take on any contract and keep ticking. 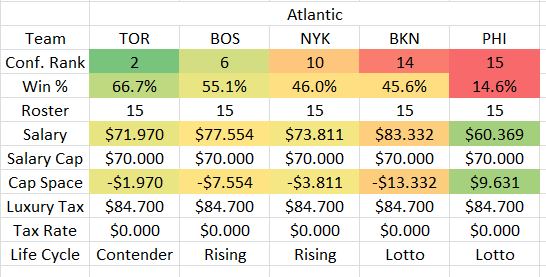 T-Dot currently stands as the #2 team in the East. They are in win now mode. They are $1.9 million over the cap, and they have 15 guys on their roster. If a move is going to be made it's going to have to be one that takes in the same number of players as they give out, and for about the same price. There are pieces on this team that are great together. But there are some places where an upgrade could be tolerated.They have a huge hole in their roster as DeMarre Carroll is going through rehab right now for knee after arthroscopic surgery. And I honestly don't think they mess around until they figure out if he's going to be good to go by the playoffs or not. This means they may just tough it out and stand pat. After all, they are 2nd in the conference by a good margin.

I do know that a number of teams are thirsty for someone with Patrick Patterson's skill level, or Bismack Biyombo's tenacity in the paint off the bench. I don't think the Raps want to move one of them for a marginal upgrade at SF while they wait for Carroll to return.

The C's are a team on the rise. They could make a play for a Top 4 seed in the East (but it will be hard to keep up with Atlanta and Chicago), after all they are only a few percentage points off of that right now. They are guard heavy and don't really have a legit inside scorer. Yes, Jared Sullinger posts up and Amir Johnson is an evolving inside/outside threat. But it's not like they have a reliable go-to guy in the paint. Unless things have drastically changed out East (and perhaps they have with Chris Bosh taking so many threes) I see Boston needing something more there. All-Star point guard Isaiah Thomas is nice, but he's not for sale. One of their other points guards could be: Marcus Smart, Terry Rozier, or even Avery Bradley.

The Celtics are somehow $7.5 million over the cap. A reason for this is David Lee -- and Danny Ainge is already having talks with him about his future with the team. He gets DNP-CDs even in blowouts. If you want him, I think he's available.

The Knicks are everyone's favorite rising team in the East. They play in the largest market, have a young rookie stud in Kristaps Porzingis, and aren't really killing themselves with their cap. I'm surprised after years and years of bloated salaries for players playing in NYC. The Knicks have pieces to move if anyone wants them. They will surely listen to any offers for anyone not named Porzingis at this point. They've made a reclamation project with Derrick Williams, and scored Arron Afflalo and Robin Lopez in free agency last summer. There's always room to upgrade around their forwards though. I'm not crazy about Carmelo Anthony, but for what their team is doing right now it seems to be working this season.

A team in win now mode should be calling about Jose Calderon. He's not specifically on the trading block, but his steadiness and pass first instincts are better served on a playoff team, in my opinion.

Man, what a mess here. The Nets don't have a GM, so that means it's going to be hard to make a move without one. Secondly, this team is almost at the luxury tax level. They need a break, and may want to shed some salary just 'in case'. From what I understand they are also planning on making some roster moves. Joe Johnson is up for anyone who wants him. He's not a part of their future plans at all they are willing to just buy him out and be done with him. So, yeah, make your best offer, JJ fans. As for the rest of their roster, no one is specifically someone you want. Brook Lopez is going no where in his career, but is solid. Thaddeus Young is a classic tweener, but that makes him a possible millennial star as a stretch big.

I don't know what their short term goals are. I can speculate it's to shed contract weight and try to lure in another free agent and reload?

Philly is all in on their process, which seems to be playing the lottery until you hit the jackpot. They aren't going for wins, so they aren't really interested in upgrading their current talent level. They're not against taking in an expiring deal if they get a few more assets (draft picks, draft rights, or young players) back in return. If you were a team getting close to the luxury tax Philly could be a good option to make a trade. As far as I can tell, no one is really on the outs there -- and no one is specifically being shopped.

Their short term goal is to maximize their lottery result. Their long term goal is to build through the draft. They are not looking to make a trade, but with their space they could be a team that helps a trade go through.